The speculation, debate and conversations about Ohio State never end, and Lettermen Row is always ready to dive into the discussions. All week long, senior writer Austin Ward will field topics about the Buckeyes submitted by readers and break down anything that’s on the minds of the Best Damn Fans in the Land. Have a question that needs to be tackled, like the one today about the Ohio State and the retooled coaching staff? Send it in right here — and check back daily for the answers.

How have the new position coaches fared in camp compared to their predecessors?

Fresh voices were clearly needed on defense. And it’s been apparent since spring that Ohio State has embraced everything they are hearing so far from four new assistants on that side of the ball.

But how are Greg Mattison, Al Washington, Jeff Hafley and Matt Barnes really doing? The signs in training camp are overwhelmingly positive, but that doesn’t really matter until the Buckeyes get on the field, unveil the changes and prove that their hard work has paid off in a game.

There’s no question, though, that the Buckeyes are more comfortable this August with what they’re being asked to do by the coaching staff. And at the same time, those new guys have been careful not to be too critical of their predecessors, refusing to mention any of the disastrous statistics from a year ago, pat themselves on the back for new drills or compare their schemes to what they could obviously see on film.

It’s also worth a reminder that guys like Greg Schiano and Alex Grinch didn’t just forget how to coach last season. But their approach wasn’t working with Ohio State, and whether that was a communication breakdown, inflexibility with the scheme or problems identifying personnel, the results certainly left no doubt that change was needed. 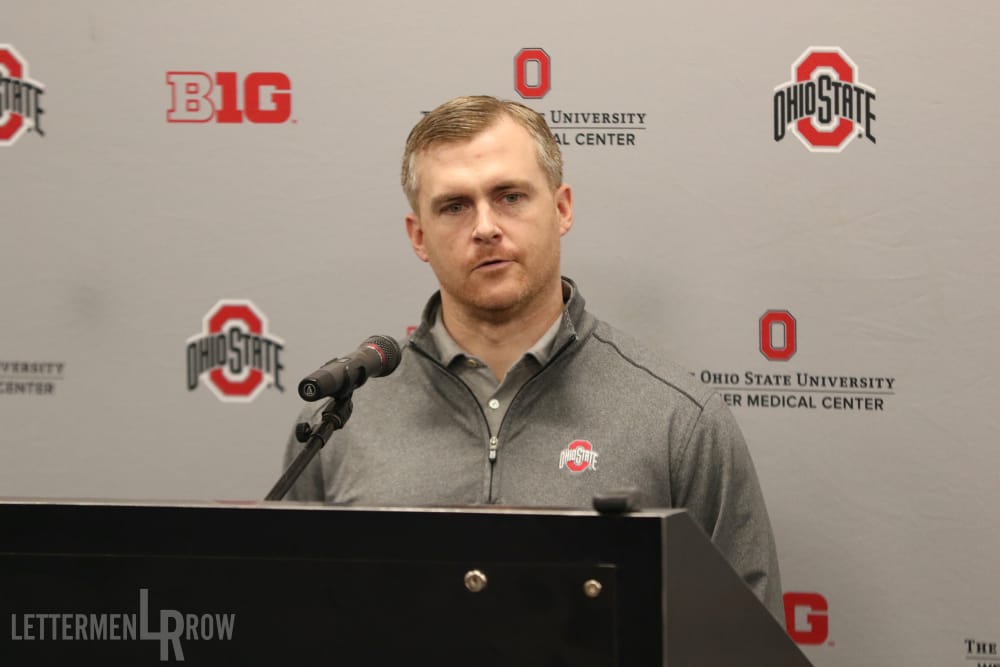 Ohio State assistant Matt Barnes is putting his stamp on the special teams for the Buckeyes. (Birm/Lettermen Row)

In their place, Mattison looks rejuvenated by the opportunity with the Buckeyes. Washington went straight to work with a motivated, talented unit of linebackers looking to finally get back to the program standard. Jeff Hafley offered his NFL expertise to a couple cornerbacks with more than enough potential to get to the next level, also winning over the defensive backs with his personality from Day One. And often overlooked in the overhaul, Matt Barnes has taken ownership on special teams while also building relationships with his sharp sense of humor.

So, will it all work? It would be almost impossible for the new staff to do any worse — but if they’re having the kind of impact that it seems they are, the Buckeyes could be in line for a massive bounce-back campaign.

“We happen to have an all-star coaching staff,” Mattison said. “We talk a lot about each coach has his own position and is responsible for his position. I mean, when you go through the staff that we have on defense, these guys have all coached a long time and they are very, very successful.Â So it’s Jeff and my job to coordinate that and to make sure we’re all working together in one direction, and that would always come under our head coach and go from there.

“So, the big thing is making sure we know what type of defense we want to run, know how much we should run — not too much, not too little. Know which way we want to go with it, what kind of defense it’s going to be and coordinate everybody to teach that.”

It’s also distinctly possible that there wasn’t uniform coordination a year ago just among the defensive assistants, and multiple sources have suggested there was friction between Schiano and Grinch about the best way forward with the Buckeyes. Some give and take is always a part of any staff. But if even the assistants weren’t always on the same page, it’s hard to fault the players for struggling with consistency — especially since talent isn’t a question for one of the most loaded rosters in the nation.

The first step, then, is chemistry for the new staff. And Ohio State is well on its way there heading into the tests that really count.