COLUMBUS — The answer on the Ohio State defensive line is always the same.

Occasionally there are doubts about the depth at a certain position. Sometimes it seems hard to imagine that the next group of pass rushers can actually meet the sky-high standards passed down by the Buckeyes. And competitors outside of Columbus love to whisper that Johnson might be running out of steam and that his retirement is just around the corner.

But Johnson keeps on powering along, making it look effortless to reload the Rushmen, develop more NFL Draft picks and find so much energy that it looks like he might really never stop coaching. He’s been doing it for years at Ohio State, and Johnson has clearly earned the benefit of the doubt whenever there’s a question about his group.

“Larry has great leadership,” Ohio State coach Ryan Day said last season. “Larry understands how to motivate a team — when he stands in front of the team, guys listen. I think his leadership had a big part in how well our team played [when Johnson was the interim coach at Michigan State], and the energy they played with.

“Couldnâ€™t be happier for him. To see him get the Gatorade bath at the end, I had a tear in my eye. Heâ€™s been through a lot this year. Weâ€™ve all been through a lot. But to see that moment for him and this team was special.”

The Buckeyes have a chance to make more memories with Johnson leading the unit this year, and the Rushmen are again bursting with potential. But what questions about the Ohio State defensive line does Lettermen Row have heading into training camp? Even if Larry Johnson figures to answer them like always, let’s dive in anyway to kick off the latest position week in style. 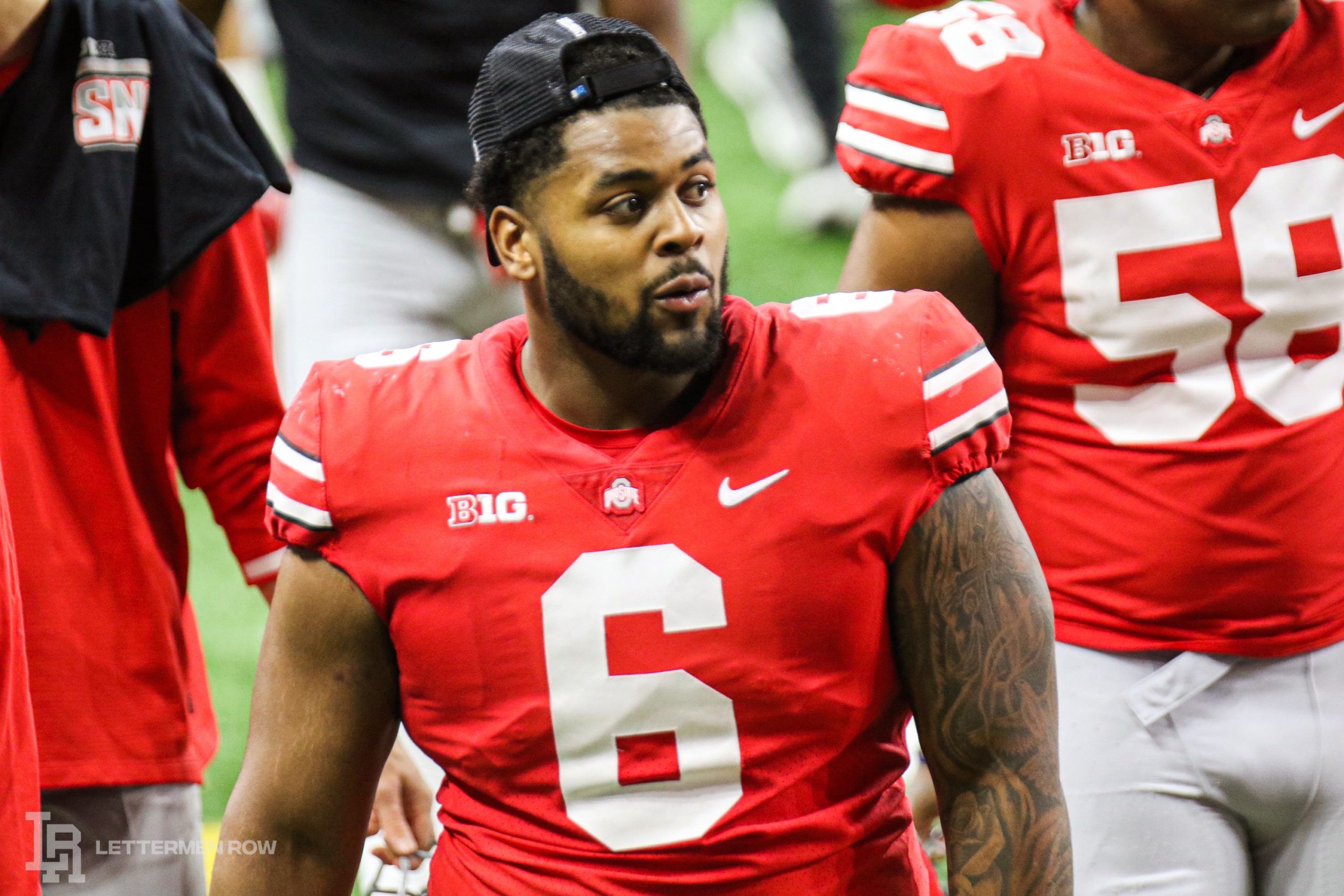 Is Taron Vincent ready for liftoff at Ohio State?

The Buckeyes were a bit surprised by the departure of Tommy Togiai in the offseason. And if the dominant defensive tackle had returned for another season, there might be no uncertainty at all for Ohio State with the first unit up front. Without his strength and size in the middle, though, there is clearly a hole to fill — and it’s time for Taron Vincent to step into the void and fulfill his five-star potential. Injuries have kept the former top-ranked recruit from making an impact with the program so far, but he’s finally healthy, building strength and absorbing all the tool-box techniques from Johnson. There might not have been anybody on the defensive line generating more buzz in the spring than Vincent, and he’s got a chance to be a key cog for the four-time defending Big Ten champs.

Do Buckeyes have two first-round picks at defensive end?

Both Tyreke Smith and Zach Harrison arrived on campus tabbed as surefire superstars, the next edge rushers to roll off Johnson’s assembly line of first-round picks. But it hasn’t happened overnight for either of them, even though the flashes of that potential have popped up with increasing frequency. Smith has had to battle through injuries, and Harrison admitted in the offseason that he needed to more fully commit himself to the process to get the results Ohio State has been trying to pull out of him. Both of those situations appear to have been addressed, and that could be a scary proposition for quarterbacks this fall with Ohio State lining up the twin terrors on either side of the line. NFL scouts will be paying close attention as well, and there’s a good chance both of those Buckeyes could end up fulfilling that first-round destiny next spring. 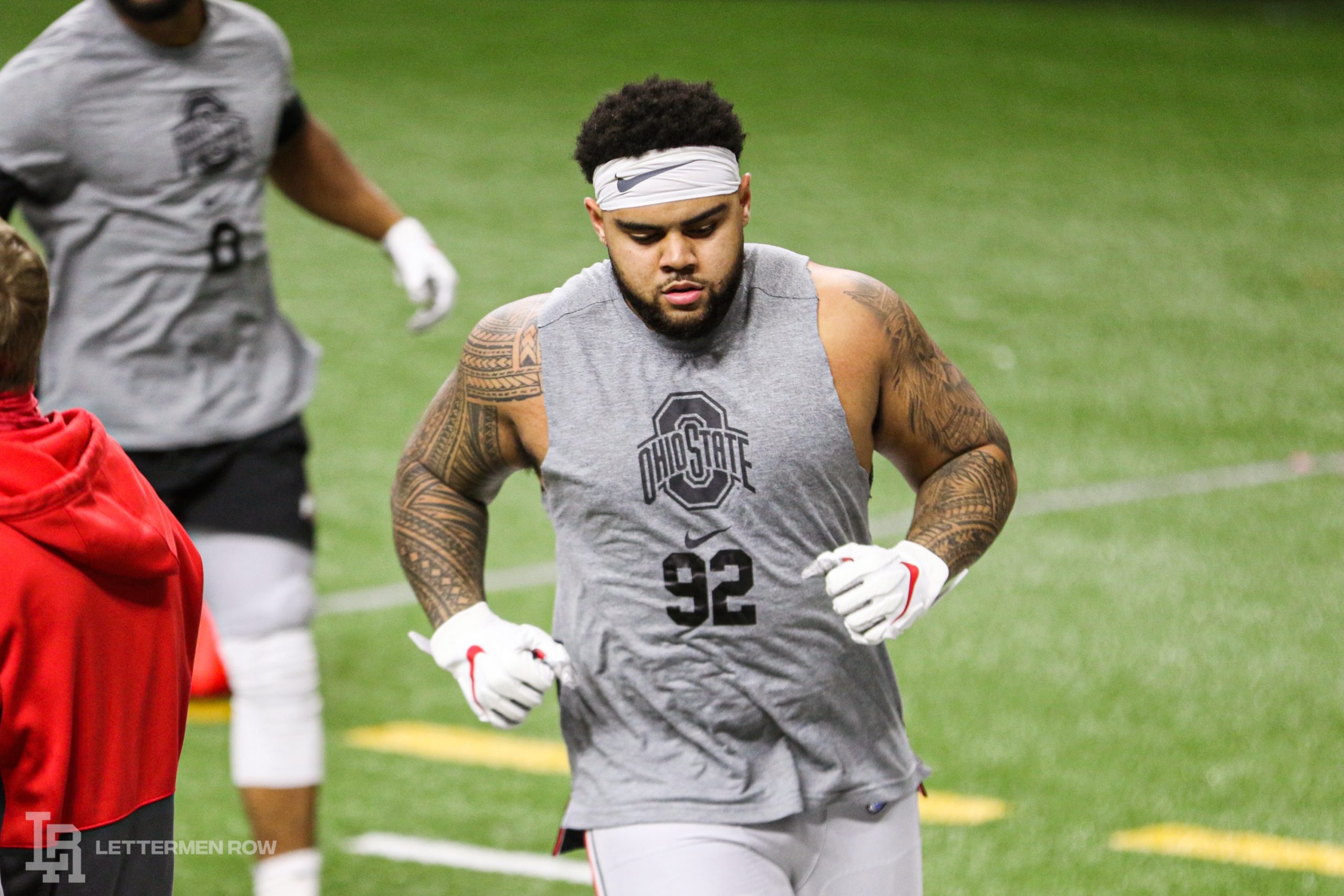 Haskell Garrett is ready to dominate on the defensive line for Ohio State. (Birm/Lettermen Row)

The rise of Haskell Garrett from reserve to All-American felt improbably all on its own. But throwing in what happened to him shortly before the season and the incredible challenges that come with getting shot in the face while trying to play football six weeks later almost defies belief. Now, though, Garrett has to find a way to build on that and validate his place among the nation’s elite defensive tackles. There’s a different level of responsibility that comes with being a returning veteran, a proven All-American and an aspiring captain at Ohio State. Clearly Garrett has proven that he won’t back down from adversity, but there will be pressure on his shoulders to meet those much-higher expectations. The Buckeyes will need him to deliver, especially with Tommy Togiai now gone.

How much will Jack Sawyer play for Buckeyes?

The Buckeyes only needed about a week of spring camp before they were ready to acknowledge that Jack Sawyer was going to play a role as a true freshman. That, of course, is well ahead of schedule for a coaching staff that prefers to be patient and avoid putting too much pressure on first-year players. But it’s a clear indication that the five-star phenom showed up physically and mentally ready for the grind with the Buckeyes, and his prolific outing in the spring game validated that hype. So, just how much of an instant impact will Sawyer make for Ohio State? It obviously helps that the Rushmen don’t exactlyÂ need to rely on him with Tyreke Smith, Zach Harrison, Tyler Friday and Javontae Jean-Baptiste all returning. But Sawyer sure appears to be ready to fill out the rotation, and it won’t be a surprise if his snap count expands as the season progresses.

The Buckeyes won’t have to wait until training camp or the start of the season to get an answer to the summer’s most pressing question on the defensive line. A decision could come at any moment now from the nation’s top-ranked recruit and the last potential piece of the 2021 signing class, and Ohio State would appear to be in solid position after J.T. Tuimoloua cancelled his last scheduled visit to Alabama. Again, Larry Johnson would appear to be the trump card for the Buckeyes, and Tuimoloua has the kind of five-star ability that could also put him in the mix right away alongside possible classmate Jack Sawyer. Ohio State adding Tuimoloua in time for August would be a massive pickup for the future — and give it somebody who could bolster the depth in the short term as well.