The speculation, debate and conversations about Ohio State never end, and Lettermen Row is always ready to dive into the discussions. All week long, senior writer Austin Ward will field topics about the Buckeyes submitted by readers and break down anything that’s on the minds of the Best Damn Fans in the Land. Have a question that needs to be tackled, like the one today about Ohio State and Demario McCall? Send it in right here — and check back daily for the answers.

I want to give myself an open-handed slap for even asking this, but..

Given the apparent lack of "wiggle" in the top 3 RBs, is there (fiiiiinally) going to be a place for McCall skillset this year?

The jolt of electricity from Demario McCall was unmistakable.

There can be no doubt that when the senior was darting around the corner on a 12-yard rush around the left edge that he was bringing the kind of energy that the ground attack hasn’t really had consistently this season. When he followed it up with a catch-and-run on the next snap that covered 27 yards, McCall essentially doubled down on a case that he might finally be ready for a bigger role in the Ohio State attack.

That two-play flash doesn’t guarantee anything, of course, because the sample size isn’t really large enough to totally erase any of the questions about his consistency or ball-security issues. McCall is the quintessential hold-your-breathÂ player for the Buckeyes, because he’s capable of either jaw-dropping moments of athleticism or head-scratching letdowns on any given play — and sometimes both in the same game. 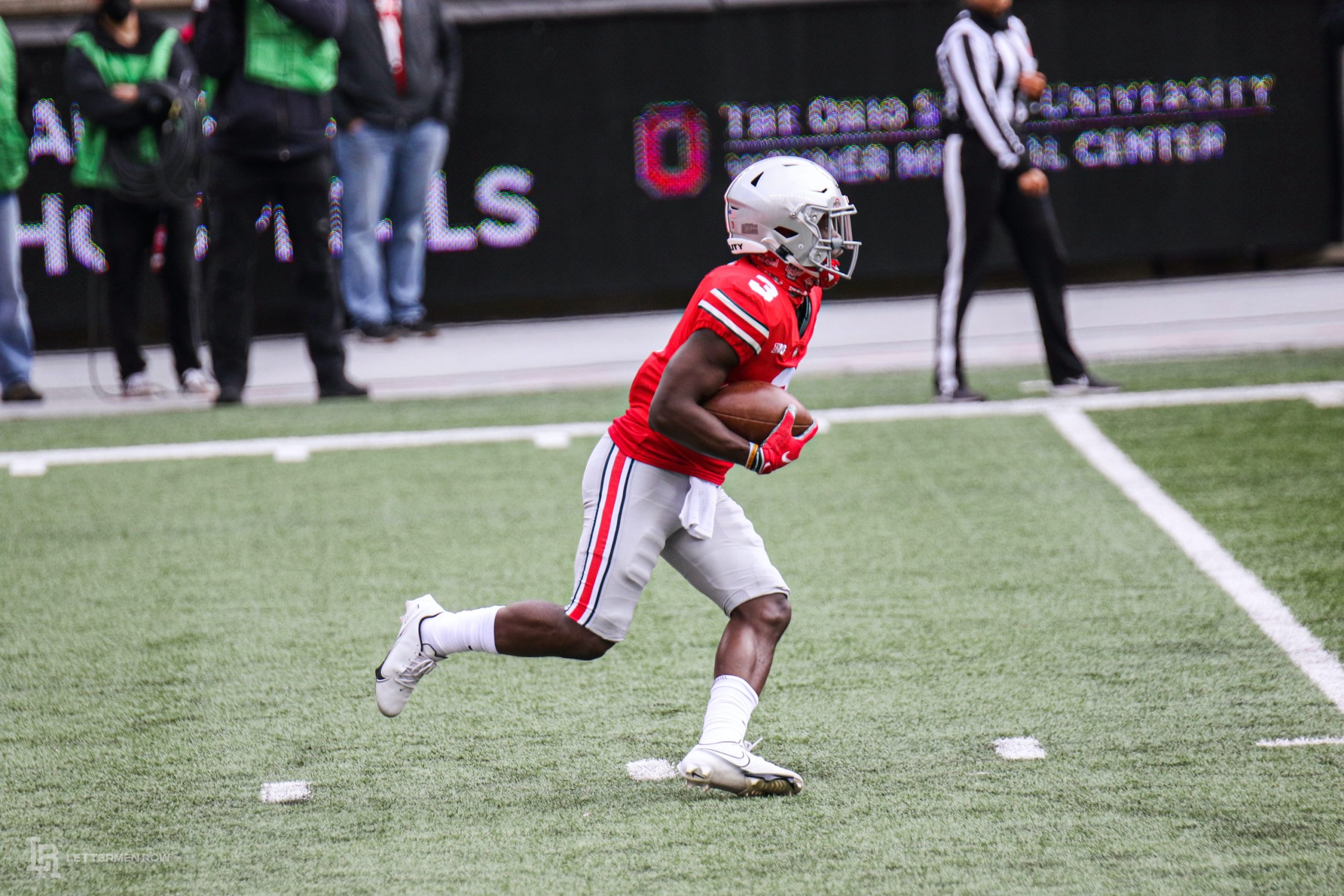 Ohio State senior Demario McCall has had a couple chances to show what he can do. (Birm/Lettermen Row)

But that two-snap burst did offer a reminder of exactly why McCall has been a topic of fascination now for five years at Ohio State. And the way he handled that opportunity on offense will surely stick in the minds of the coaching staff if the rushing attack happens to need a spark or if Trey Sermon misses any time with the injury that forced him to the sideline in the fourth quarter on Saturday against Rutgers.

It’s still debatable whether or not the Buckeyes are truly in need of any kind of answer at running back considering they can easily rely on perhaps the most potent passing attack the program has ever had. And considering the fact that McCall has annually had his most productive outings against the Scarlet Knights, it’s possible his latest work against them might not actually move the needle that much.

But all McCall could do was capitalize when given the chance, and he did exactly that for the Buckeyes.

“Demario, he’s a great player, he’s a dynamic player,” Ohio State quarterback Justin Fields said. “He can play in the slot, he can play running back, so I mean, he’s just a great all-around player.

“The thing about him is that he’s a huge leader for our team. I think he does a great job leading the guys in the receivers room, so he’s a big help. I think he’s very dynamic and we can use him in a multitude of ways.”

Figuring out the best way to do that has always been the hard part for the Buckeyes, and executing it at a high level is still the challenge for McCall.

The clock is winding down on his career at Ohio State. And while it hasn’t ever gone the way Demario McCall might have envisioned, that two-play glimpse at what he could provide at least offered a fresh glimmer of hope.