SCOTTSDALE, Ariz. — Ryan Day can change gears with his message just as easily as he can shift his play-calling for the Ohio State offense.

Whatever the first-year coach thinks the Buckeyes need to thrive, that’s exactly what he’s going to give them on the practice field.

Just this week that has meant alternating from one of the most fiery speeches of the season and then the next day playfully forcing the team to walk through a gate with him waiting with a blocking pad on the other side. And while those two open practices were just a glimpse at the way Day has run his workouts this season for the unbeaten Buckeyes, it was a clear reminder of how he’s balanced his laidback persona with a deep competitive streak.

“You take it day to day, and that’s one of the things that I’ve talked about this year that I think the coaching staff has done a great job with,” Day said on Thursday morning. “With our team and with this generation, it’s kind of day to day. It’s just the way it is, and our guys have had great practices. Preparing for this game is almost like a bye week because it’s happened so fast. We’ve done a really good job, I think, of preparing the guys for that.

“But when it’s Christmas, we have to have some fun with them — especially when they’re away from home and some of the younger guys have never done that before or been away for Christmas. We want to have a lot of fun and make sure they understand this is their family away from home. But then some of the other practices have been really spirited, really physical and there’s a lot on the line here.”

The time to battle Clemson in the high-stakes Fiesta Bowl has almost arrived. And as the Buckeyes finish up the final preparations for the College Football Playoff on Saturday night, here’s what Lettermen Row learned from the media day festivities in the desert. 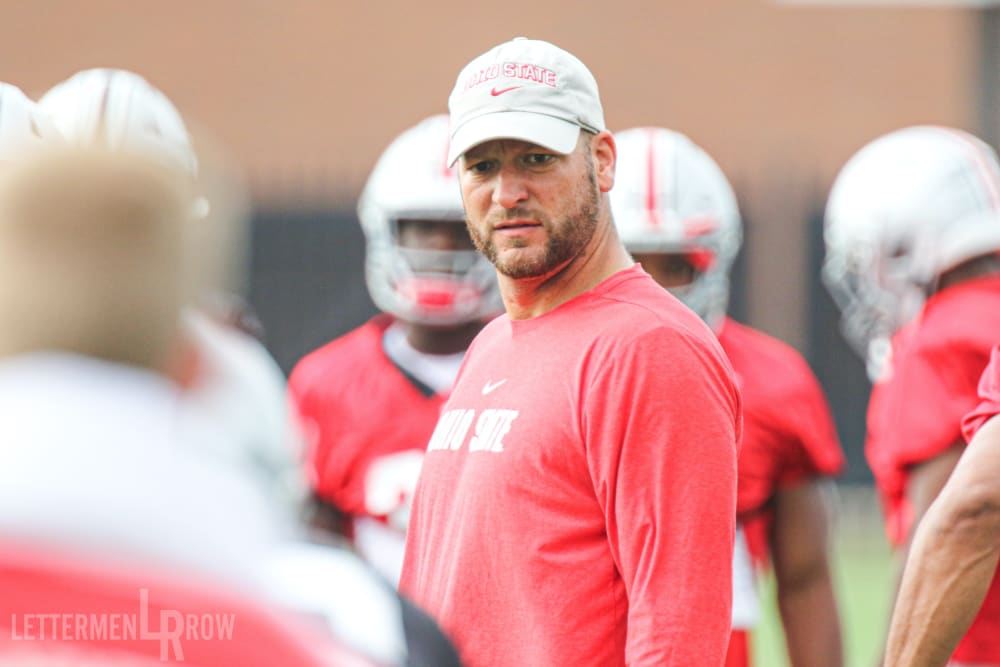 The fork in the road is coming again for Mike Yurcich, and it’s increasingly appearing like the Ohio State offensive coordinator will be choosing a path back to the Big 12. Multiple sources with ties to both the Buckeyes and Texas have indicated to Lettermen Row that Yurcich is leaning towards a departure after one season coaching the quarterbacks in Columbus, though he refused to address the situation directly during his media session on Thursday.

“It’s the rumor time of year,” Yurcich said. “Our focus is on beating Clemson, and that’s the most important thing right now. That’s where our focus is right now.”

The heavy casts have been changed out somewhat regularly, which has occasionally made it seem like Damon Arnette was on the brink of getting back to full strength following wrist surgery in October.

“I’m going to a smaller one today,” Arnette said. “The palm is going to be a lot slimmer, it’s not going to be as long, so it’s really just going to protect my hand from not bending all the way back. It’s really the cast that I had pre-surgery for the first couple games of the season — when people really didn’t know I even had a cast on.

“When I went to the bigger cast, that’s when the pain really started hurting because of the surgery. It’s just now going away. It’s healing pretty good.”

There was a worst-case scenario for Ohio State that could have forced it to replace all five starters heading into next season. But it appears the future is as bright as the present for the Buckeyes, who look like they’ll avoid any early departures and have three returning starters back next season to block for quarterback Justin Fields. After a breakout campaign at right guard for Wyatt Davis, a rapid rise at center by Josh Myers and the possibility that left tackle Thayer Munford also could have tested the professional waters, Ohio State entered the postseason and the looming January deadline to declare for the draft with some uncertainty.

But Myers and Munford both indicated that they didn’t submit paperwork to be evaluated by the NFL advisory committee, and Davis publicly declared that his intention is to return no matter what happens with his draft feedback.

The grand total of time back at Boston College was about eight hours for new coach Jeff Hafley. There is still some time where his next job is requiring his attention, so he is sacrificing just a little bit of sleep as his continues to fulfill all of his normal co-defensive coordinator duties for the Buckeyes. But Hafley hasn’t missed any meetings, he’s been at every practice, he finished up his recruiting responsibilities for signing day — and he left no doubt that his effort in chasing a national title remains unchanged.

“And then, yeah, after I hang out with my wife and kids and they’re asleep, then I try to get a few extra hours. But that’s it. There’s nothing else that I’m going to do until this thing is over. This is too important.”

There won’t be any more health percentages revealed by Justin Fields about his injury. After three weeks of discussing his rehab process and gauging the strength of his sprained left knee, the sophomore quarterback isn’t revealing any more information with the Fiesta Bowl now just two days away.

The Heisman Trophy finalist pegged himself at “80 or 85 percent” before heading to practice on Tuesday. But that will be the final word from Fields on the matter until after the matchup with Clemson.