SCOTTSDALE, Ariz. — Ryan Day was surrounded on all sides by a circle of Ohio State players and coaches in the rain.

His voice continued to increase in volume. The Buckeyes coach was gesturing wildly, punctuating his message and not holding back to motivate his team before one of the most important practices of the season. Honestly, Day could have been saying anything and the tone would have been enough to get the full attention of his team.

For as much as he’s hailed for his laidback, cool composure, Day certainly has a fiery side. And he put that on full display on Tuesday morning at Notre Dame Prep as the Buckeyes geared up for the Fiesta Bowl against Clemson and the urgency builds for the No. 2 seed ahead of the matchup on Saturday.

“We’re just trying to make sure everybody is as focused as they can be,” Ohio State captain Chase Young said. “That’s what got us here, and we can’t change now. We’ve got to be who we are, and we know we’re out here in Arizona and things like that, but this is a business trip. We’ve got to stay focused. 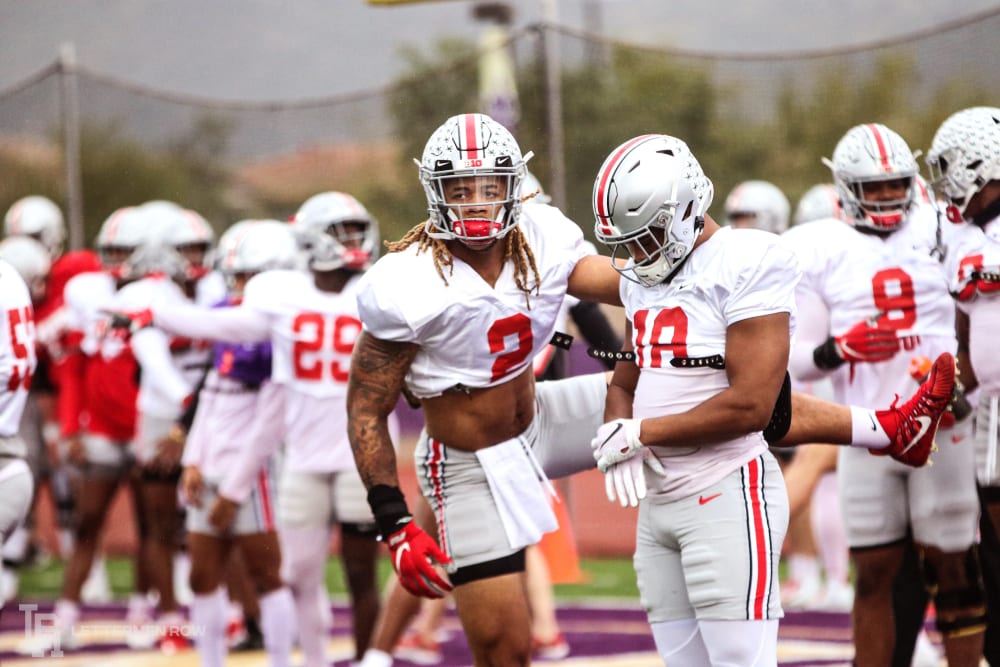 The Buckeyes will be put to the test by the No. 3 Tigers this weekend, and they’re clearly embracing the opportunity ahead of them as they chase a national championship. There was no mistaking the level of focus on the third day of practices in the desert, and here’s what Lettermen Row learned from the workout and a media session with two coordinators and six Buckeyes.

The amount of time to rehab his injured left knee is running out for Justin Fields, and the Buckeyes sophomore didn’t hide the fact that he’s still not feeling completely like himself as the Fiesta Bowl creeps closer.

Fields still had a knee brace on during practice on Tuesday, he was moving with a bit of a limp and he’ll still have to have some protection on his leg against Clemson. But the Heisman Trophy finalist was also still delivering the football with accuracy, he was effortlessly connecting on deep shots even in some less-than-ideal conditions and there’s no question that he can continue to be effective even at less than 100 percent.

â€œMy knee is probably not where I wanted it to be right now,â€ Fields said. â€œIâ€™m probably going to wear the same knee brace that I started out with for the Team Up North game. I brought the big one just in case anything happens.Â I mean, I definitely thought I would be closer to 100 percent. If I gave a percentage right now, Iâ€™d probably be 80 or 85.â€

Given his soaring stock and a plan that was seemingly in place even before the year started, there doesn’t appear to be much uncertainty about what the next step for Jeff Okudah will be after the season.

But the likely first-round draft pick isn’t ready to make any sort of declaration about his future. Right now his only focus is making the most of the showcase opportunity for him and the Buckeyes against a talented Clemson passing attack.

“I wouldn’t say there’s an urgency,” Okudah said. “I kind of feel like I owe it to the younger guys, the older guys to be at my best. I don’t worry about my situations. I worry about other guys, seniors, who it might be their last game, the younger guys who kind of look up for leadership. I think I have to just be at my best to do my part and the way everything plays out.

“I haven’t had a chance [to worry about it]. The season goes so fast. You never really have a chance.Â Just bask in the moment.”

A late switch in the practice schedule kept Jeff Hafley from fulfilling his scheduled media appearance on Tuesday morning. Instead he was leading a defensive meeting for the Buckeyes, continuing to give his full attention to the program as it tries to win a national championship with him before he leaves to take over Boston College.

Hafley was all smiles on the practice field, bouncing around during drills and providing energy for the defensive backs. And his commitment to Ohio State hasn’t gone unnoticed by the rest of the coaching staff.

“I’m so happy for him,” Mattison said. “Selfishly, I wish he was still here. We worked tremendously together. He does a great job, but I’m happy for him. At a young age, he’s got a chance to have a very good — a great job. And he will do a really good job.

“I’m so proud of him, the fact that he stayed and he is putting everything he has into this right here. A lot of guys wouldn’t have done that.”

Buckeyes don’t back down from practice challenge

If Ohio State had wanted, there was an indoor practice facility available to them later in the afternoon on Tuesday. They could have tweaked the schedule to avoid the rare cold, wet conditions in Arizona and practiced in more comfort — like Clemson chose to do. Instead, though, Day chose the option that reinforces his “Tough Love” approach with Ohio State, which has obviously dealt with much more weather than what it saw in Arizona.

The Buckeyes are scheduled to practice again on Wednesday at Notre Dame Prep as they continue to go through what Day has designed as a normal work week for his team with an eye on minimizing disruptions to the routine whenever possible.

“It’s like being on the road for an extended period of time,” Day said. “That’s kind of the way we’re looking at it. Certainly this is a bowl game, but it’s a little different. This one you’re playing for a lot more, and I think the guys are going to prepare that way this week.”