SCOTTSDALE, Ariz. — The list of accomplishments at Ohio State is already exceedingly long for the program superstars.

Chase Young has been a Heisman Finalist and won three Big Ten titles.

Jeff Okudah is an All-American with three sets of Gold Pants.

J.K. Dobbins burst on the scene as one of the best freshmen the Buckeyes have ever seen and he’s never lost a postseason game.

Those three were the headliners of a star-studded recruiting class, and they get top billing now for Ohio State heading into the Fiesta Bowl matchup against Clemson. But as hard as it might be to believe, they’ve never been in a College Football Playoff game until now — leaving one notable absence from the otherwise jaw-dropping resumÃ©s.

These are the games that draw elite athletes to Ohio State. And they’re the same ones where the program needs those guys at their best if the Buckeyes are going to dethrone Clemson and continue the pursuit of a national championship. 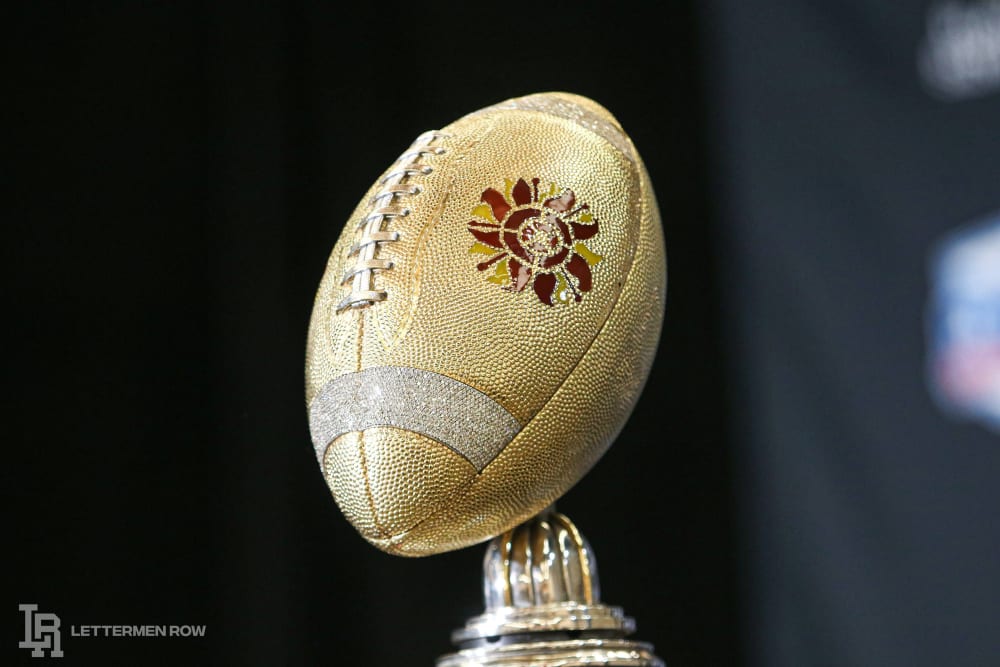 Ohio State and Clemson are playing for the Fiesta Bowl trophy on Saturday night. (Birm/Lettermen Row)

“For us, everything we’ve accomplished is obviously really humbling, but our sights are set on a bigger thing right now.”

There is no value at this point in looking back and debating whether those decorated juniors should have already had the chance to compete for the biggest prize in the sport, because it obviously doesn’t change anything. And at any rate, the Buckeyes are on the stage now and took matters into their own hands this season by storming through the schedule unbeaten on the way to another conference title.

Along the way, Young became the most dominant defensive force in the nation. Okudah has fulfilled his potential and will almost certainly be a first-round pick in the NFL Draft next spring. Dobbins continues to be underrated, but he’s built a rock-solid case as arguably the best tailback in the country.

Beyond that, Justin Fields joined the crew in January and developed into a Heisman-caliber quarterback. A young offensive line zipped through the learning curve to plow through every top-ranked defense it faced. Veterans who chose to stick around like Jordan Fuller, Malik Harrison, Damon Arnette and K.J. Hill have elevated the Buckeyes and their draft stock all year.

While there’s also plenty of credit to hand out for a first-year coach in Ryan Day and the coaching staff he revamped, in the end the games are won and lost by the players. And with so much on the line against a Clemson squad that is every bit as talented, it’s going to be up to the Ohio State superstars to prove that they belong in the spotlight.

“Yeah, man, it’s definitely frustrating what happened these first two years,” Young said. “But being a captain this year, I tried to talk to our guys and say that with one mishap, we wouldn’t have been here. I just tried to make sure they’re as focused as they can be, and it got us here. But we can’t change now. We’ve got to be who we are. We’re out here in Arizona and things like that, but it’s a business trip. We’ve got to stay focused.

All season long, the Buckeyes have revealed themselves to be perhaps the most complete team in the country.

Now they have to prove it.