COLUMBUS — Everything is still on schedule for Ohio State.

There was turbulence in August. September was unusual. There was a significant setback in October.

But here the Buckeyes sit heading into the final two weeks of the regular season, still with the Big Ten championship in reach and a potential spot in the College Football Playoff up for grabs as well. That’s all any program can really ask for at this time of season, and that’s why year after year Urban Meyer sets the goal for his team to be prepared to compete for championships in November.

Ohio State had to deliver a contender-worthy performance to survive on Saturday at Michigan State, and it stepped up when it absolutely had to with no margin for error. In the process, the program inched closer to achieving what it set out to do at the start of the season — and ensuring that The Game again has the most massive stakes possible.

But before the Buckeyes can gear up for that war, they’ve still got to go on the road and pick up a Big Ten win at Maryland. Lettermen Row is kicking the week ahead off as it always does with Five Questions for Ohio State.

Can the Buckeyes avoid looking ahead?

The temptation is real, and it’s probably not going to be possible for Ohio State to completely block out what’s on deck after the last regular-season road game on the schedule. The Game is almost here, and with the East Division title, a shot at the Big Ten crown and College Football Playoff implications on the line along with those priceless bragging rights, it’s human nature to start thinking about it early. Once again, this will be a test for the captains and veterans on the roster to make sure that the Buckeyes handle their business on the practice field and show up with their focus solely on the Terrapins on Saturday afternoon. Ohio State always gets the best effort from its opponents, and if it’s not ready for a fight, everything could slip away from it even before that shot at the Wolverines. 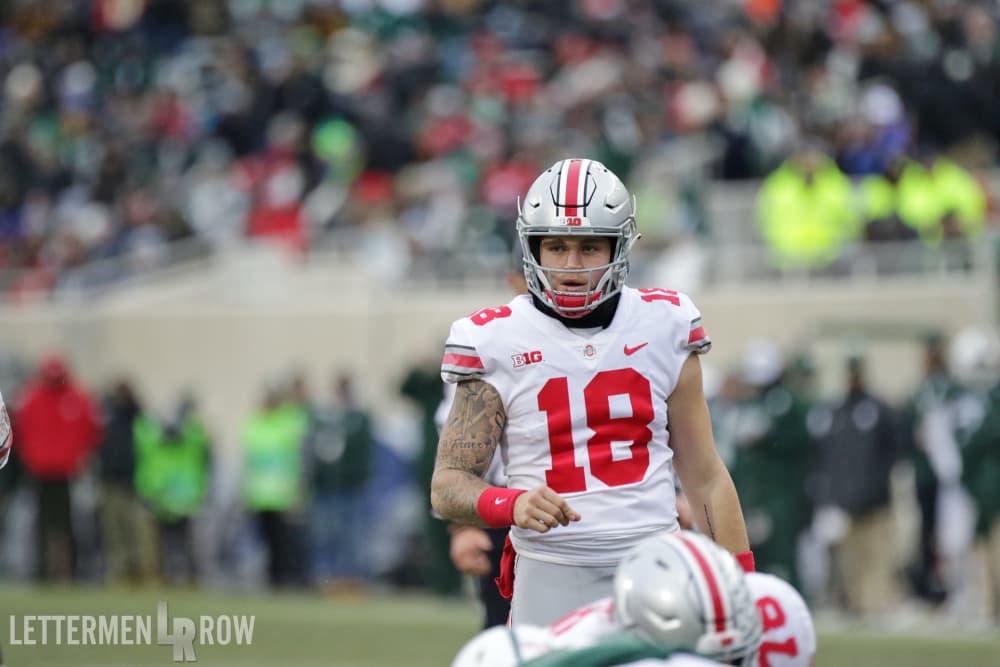 How much will Ohio State use Tate Martell now?

The package not only exists, Ohio State had enough confidence in Tate Martell to use it in a pressure-packed situation against one of the best rush defenses in the country. After weeks of standing on the sideline with a frustration that the Buckeyes viewed as healthy thanks to his competitiveness, the redshirt freshman quarterback got his chance to contribute again as a red-zone weapon. The wrinkle worked the first time, and Ohio State wasn’t afraid to go back to it later in the game — although it didn’t end well with Martell fumbling a snap for a turnover. The offensive coaching staff clearly isn’t holding anything back now, but it still bears monitoring to see exactly how often the Buckeyes are willing to take their best player off the field to get Martell in for Dwayne Haskins.

Can the Buckeyes dial up the pass rush again?

Even without Nick Bosa to lead the way, the Rushmen still have more than enough talent to disrupt opposing quarterbacks and pile up sacks. But the defensive line is currently in a lull with just one sack over the last two games after finishing without one at all against Michigan State. Jonathon Cooper is playing with a lot of energy and assisted on a tackle for loss while also recovering a fumble. Chase Young’s athleticism is undeniable, and on three occasions against the Spartans he was close to turning hurries into sacks. The same is true for defensive tackle Dre’Mont Jones, who more than made up for his near-misses by recovering a fumble for a touchdown. Sacks, of course, aren’t the only way to measure success for a pass-rushing unit — but the Buckeyes could certainly use a couple more of them down the stretch. 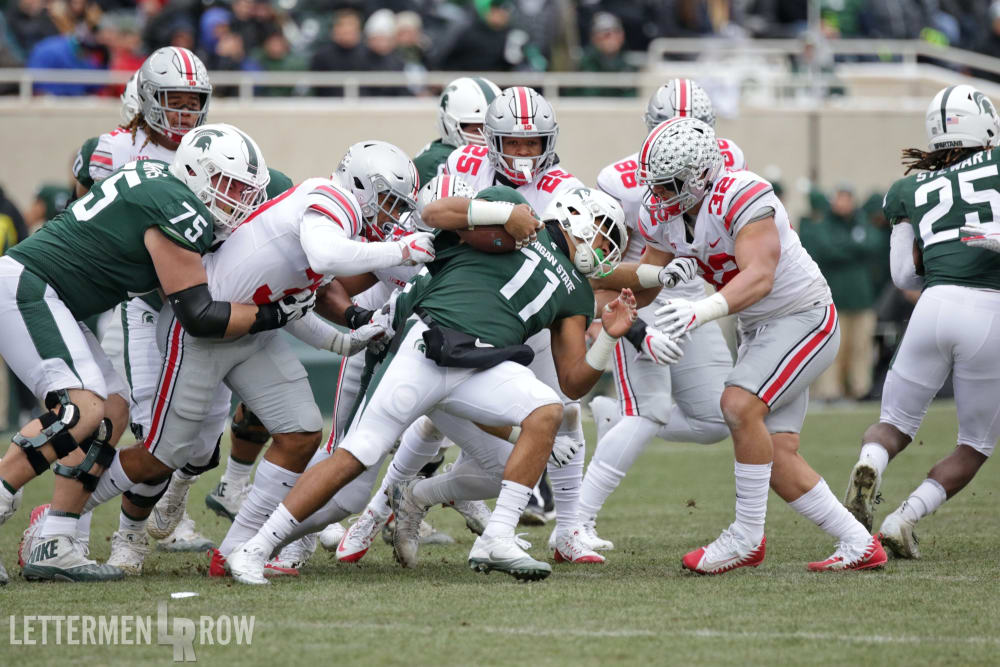 Ohio State dialed up one of its best defensive performances of the season at Michigan State. (Birm/Lettermen Row)

How legitimate is the defensive improvement?

The Silver Bullets lived up to the moniker again, holding Michigan State out of the end zone and giving up just a pair of measly field goals. The defense punctuated that strong performance with a touchdown of its own, giving the Buckeyes plenty to feel good about heading into the final two weeks after a roller-coaster ride of a season so far. It must be pointed out, though, how utterly incompetent the Spartans appeared to be at times offensively — and it wasn’t the first time this season that has happened. So, it’s at least fair to ask how much credit the Buckeyes deserve for that outing as a sign of clear-cut progress. There’s no doubt they went out and executed, flew around to the football and played physical football, so they absolutely deserve recognition. But the key will obviously be continuing to validate that growth moving forward.

Will Buckeyes keep riding the hot hand at tailback?

The rotation between Mike Weber and J.K. Dobbins doesn’t seem to be going away for the majority of games. But the last two weeks have been noticeably different when it comes to the crucial fourth-quarter carries, which suggests Ohio State is starting to be more cognizant of who is producing and sticking with one guy when it’s clear who is more effective. Weber’s fumbles two weeks ago against Nebraska paved the way for Dobbins to rack up more carries and a huge statistical performance. But with Weber securing the football against Michigan State, the guy who has been more explosive and averaging more yards per carry all season was the choice to wear down a stout rushing defense as Ohio State worked on the clock and sealed a victory. Is that the approach that the Buckeyes are going to use now? An answer will be revealed on Saturday at Maryland.