COLUMBUS — The depth isn’t quite where Ohio State wants it just yet at defensive tackle.

But Larry Johnson doesn’t have any concerns that the Buckeyes won’t get there — or that Taron Vincent and Haskell Garrett won’t be able to play their parts in strengthening the inside spots up front.

Neither of those big, athletic weapons are fully cleared medically yet after a week of training camp for Ohio State, and the program isn’t releasing any kind of definitive availability report at this point with more than two weeks to go until the season opener against Nebraska. But Johnson is expecting to have that tandem back at some point for the Buckeyes, and given their potential and importance to the rotation, the status of those Rushmen will be one of the most intriguing subplots leading up to kickoff on Oct. 24.

“Haskell is not quite cleared yet because of his injury, and Taron has slow progress going on right now,” Johnson said before practice on Wednesday. “Hopefully we’ll have [Vincent] by the time we get to game week, but we’re just bringing him along slow. With the pandemic and not being able to get rehab and all those things he needs to have, we’ve just kind of bringing him along. His progress has gone well, but we’ll see what happens as we get closer to game week. 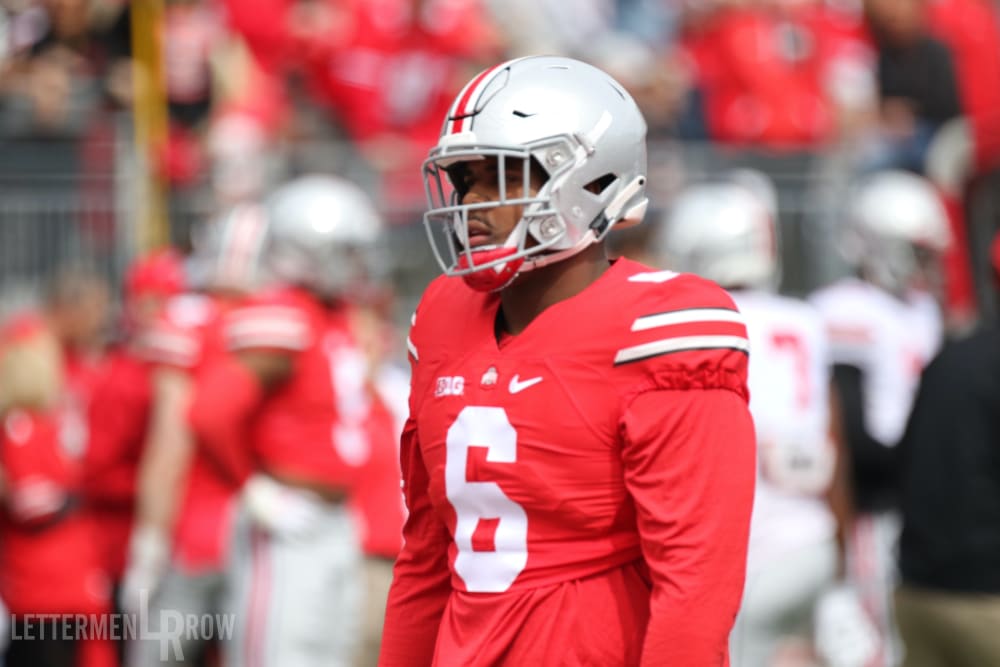 Ohio State is hoping to get a healthy Taron Vincent on the field this year. (Birm/Lettermen Row)

Johnson wasn’t ready to commit one way or another about whether Garrett or Vincent would be part of that group when the Buckeyes finally get back in the Horseshoe for a meaningful game. And the revered position coach also was in no hurry to reveal any secrets about how Ohio State might tweak the rotation if those guys aren’t ready coming off a shoulder injury for Vincent and a gunshot wound for Garrett.

If need be, the Buckeyes could always dip into the reserves on the edge with a versatile lineman like Tyler Friday. Or Johnson might be content to let Antwuan Jackson handle a heavier workload there while younger Buckeyes like Jaden McKenzie or Ty Hamilton push for reps after turning heads so far in training camp.

The ideal scenario, of course, includes Garrett getting the green light from the medical staff so he can provide his veteran leadership in the trenches and Vincent zipping through the final stages of his recovery to finally have a chance to show why he was once the top-rated recruit at his position.

“With the injury and being out of football for a long time, then the pandemic hit and [Vincent] couldn’t practice, you don’t just jump back in and get to the same level you were when you got here,” Johnson said. “That’s why we’ve done a great job of developing him and getting his skill set back to where it needs to be. Being out of football for a year, it’s tough for anybody to come back and be ready to go.

“But I think the potential is there, no doubt about that. Now it’s just about getting him ready to have the opportunity to go play in a game and play some live football. We’re working really hard to make sure that happens.”

There is no timeline for the Buckeyes with those defensive tackles at the moment — but there’s also panic from Larry Johnson, either.

Ohio State defensive line coach Larry Johnson and six of his Buckeyes chatted with the media before practice on Wednesday. Full comments from Johnson, Tommy Togiai, Zach Harrison, Tyreke Smith, Javontae Jean-Baptiste, Antwuan Jackson and Tyler Friday are available below — and all Ohio State press conferences can be streamed live on the Lettermen Row YouTube channel.