The speculation, debate and conversations about Ohio State never end, and Lettermen Row is always ready to dive into the discussions. All week long, senior writer Austin Ward will field topics on Ryan Day and the Buckeyes submitted by readers and break down anything that’s on the minds of the Best Damn Fans in the Land. Have a question that needs to be tackled, like the one today aboutÂ the running back depth chart? Send it in right here — and check back daily for the answers.

Will linebackers be a more productive part of the defense? Who will step up behind Dobbins in the RB2 role? And did anyone ask Hafley is the DBs will turn around and look for the ball? 😉😂

There are plenty of more pressing position battles for Ohio State to monitor this spring, and the return of J.K. Dobbins for another season means there is absolutely no uncertainty on top of the depth chart at tailback. Truthfully, the situation at running back might finally be somewhat comfortable for the Buckeyes since they also don’t need to stress about the best way to share the workload between two capable starters — something that probably wasn’t handled all that well a year ago.

But the program is going to need to start solidifying a pecking order behind Dobbins. And that could set up one of the more fascinating, under-the-radar competitions in camp when the pads go back on in March.

The likely favorite for that role at this point is Master Teague heading into his second season with the program. His freshman campaign only included a handful of early glimpses at what he could do with the football in mop-up duty, but there were encouraging signs about his toughness, vision and ability to finish runs even in that small sample size. It’s fair to wonder how a head-to-head battle with Brian Snead would have played out considering how much upside the former classmate brought to the Buckeyes. But the program has already parted ways with Snead, putting more urgency on the development of Teague. 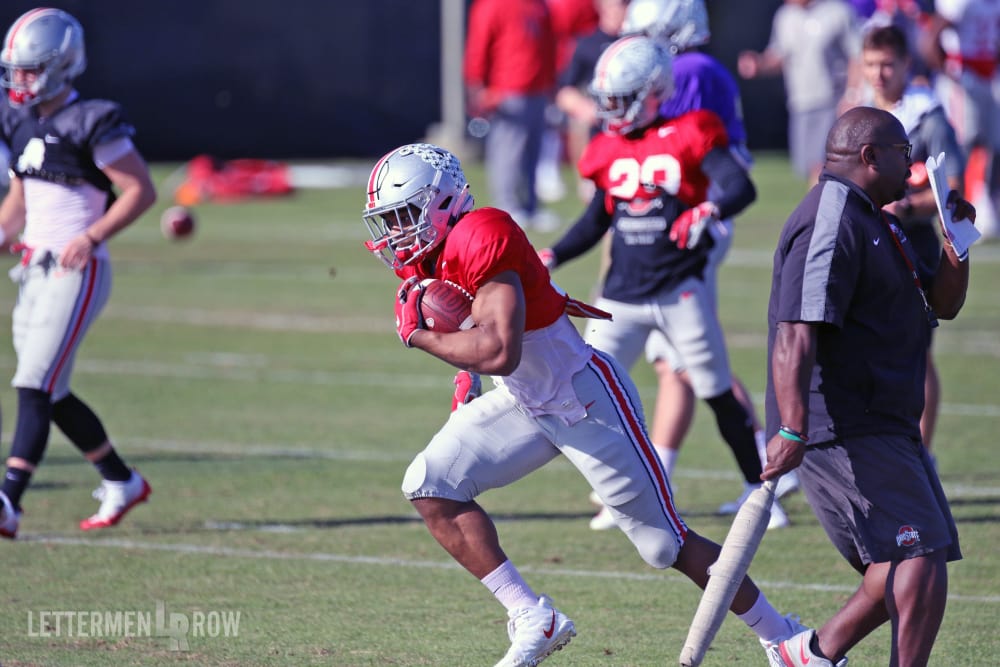 Ohio State running back Master Teague is fighting for the backup job for the Buckeyes. (Birm/Lettermen Row)

It also opens the door for Demario McCall to make a push for a role at running back again, and he’s facing what might be considered a make-or-break point in his career. Injuries, position changes and ball-security issues have kept the dynamic athlete from ever truly tapping into the potential Ohio State has long seen in him, but McCall was starting to see some opportunities in the backfield at the end of last season again. And he’s got the experience, familiarity with the offense and explosiveness to potentially become a solid complement for Dobbins.

The wildcard in the race is the new entry. Marcus Crowley was perhaps a bit underrated as a recruit, but the early enrollee has an impressive background, more than enough ability to blossom into a star for the Buckeyes and the full support of position coach Tony Alford. The light doesn’t always turn on right away for true freshmen, but Ohio State has obviously had some recent success with first-year backs — starting with the guy who will lead the way this year. If Crowley can make the most of his head start in spring practice, there’s no reason to rule him out as a significant factor by the time August rolls around for the Buckeyes.

The key for Ohio State is that it isn’t short on options. But none of those candidates for the backup role right now would appear to be no-doubt, slam-dunk options to claim the role heading into the 15 workouts in March and April — which should make for one of the more intriguing competitions of camp.