The speculation, debate and conversations about Ohio State never end, and Lettermen Row is always ready to dive into the discussions. All week long, senior writer Austin Ward will field topics about the Buckeyes submitted by readers and break down anything that’s on the minds of the Best Damn Fans in the Land. Have a question that needs to be tackled, like the one today about Ohio State, Joe Burrow and the quarterback decisions? Send it in right here — and check back daily for the answers.

I guess what I’m trying to ask….40 years from now, will people look at this and think not keeping Burrow was a mistake by Ohio state?

The narrative has already spun out of control, and it didn’t even take 40 years for the revisionist history to start. In fact, even while Joe Burrow was on the field winning his national championship at LSU, the tall-tale was growing with stories about him not getting a real shot at Ohio State, how he wasn’t a touted recruit and how his old program might have missed the boat.

Burrow’s story is absolutely remarkable, and it needs no embellishment. And when it comes to his difficult departure from the Buckeyes that nobody truly wanted, it’s important to keep a number of details in perspective — starting with the fact that in the end, everybody involved got a solution that should be considered a success.

No, Ohio State doesn’t have a national championship in the last two years. Would that have changed if Burrow had stuck around and been named the starter over Dwayne Haskins? Unless Burrow could fix the worst statistical defense in school history in 2018 or he would have had one ounce of luck that Justin Fields didn’t get in the Fiesta Bowl this year, he probably wouldn’t have tipped the scales for Ohio State.

It’s going to be really easy for years to come to go back and assume Burrow’s fairytale ride would have played out the same way in Columbus, but there’s no guarantee of that. The What If game if he had never broken his hand during training camp in 2017 is a fun hypothetical, but that was part of the journey for both him and the Buckeyes. Haskins got the first crack at the backup job, he came off the bench to lead a second-half rally in The Game and that memory combined with the arm that made him a Heisman Trophy finalist and first-round pick were always likely to give him the edge over Burrow. Ohio State wanted desperately to extend the battle into training camp, but Burrow was at a crossroads, saw where the situation was probably heading and took control of his career. 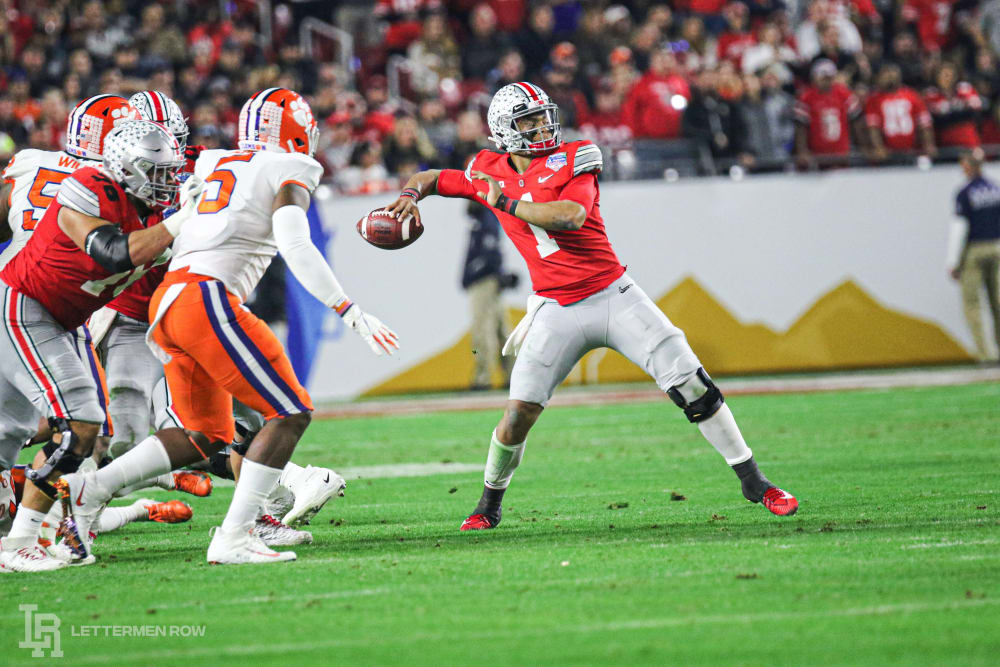 Ohio State will have Justin Fields back for another season as the starting quarterback. (Birm/Lettermen Row)

Nobody can be blamed for that, and nobody wound up losing in the transaction. It seems like a distant memory now, but Burrow wasn’t the program-changer he became this season right away for LSU, and Ohio State wound up with a guy who shattered Big Ten records, won a conference title and earned a trip to New York in 2018. If Haskins hadn’t moved on after that and if Burrow wasn’t on the bayou, the Buckeyes wouldn’t have been in position to grab Fields out of the transfer portal — and another record-setting season at quarterback wouldn’t have happened for the program.

On top of that, Ohio State still gets Fields for another season, which means the dominoes still haven’t all fallen. At this point, it’s already fair to assess the situation for the Buckeyes as having worked out as well as it could have hoped — and that’s without factoring in the potential to go compete for another national title with Fields as he goes into his junior season as a favorite to win the Heisman. All told, it’s hard to look at that and believe Ohio State did anything wrong, just like it’s clear that Burrow’s decision wound up working out perfectly for him.

The situation was truly unique, somewhat unprecedented and surely a topic of debate forever moving forward. But all of the details have to be factored into the discussion, and there doesn’t always have to be a loser. In this case, every party made the best possible decision and hindsight shouldn’t change how they’re viewed.