Stay in touch or be left out because Ohio State recruiting is a 24-hour, seven-day-per-week obsession. What’s the latest news as the Buckeyes build for the future? Get that and more Sunday through Thursday on Lettermen Row. Today’s edition talks with Joe Royer about his recent Ohio State offer and more.

All week we talked about the battle during the one-day camp at Ohio State on Thursday and how it could impact the program’s tight end recruiting in the 2020 cycle.

As of the end of camp, there was no offer to either Joe Royer or Luke Lachey. By Friday afternoon, though, after the Ohio State coaching staff got together and reviewed the video, an offer went out to the Cincinnati Elder standout Royer.

I am extremely excited to have received an offer from The Ohio State University!! Thank you @OSUCoachKDub and @ryandaytime for this opportunity! Go Bucks‼️ pic.twitter.com/pL3nU689p3

“They just said that I did great blocking,” Royer told Lettermen Row. “My route running was really good and fast. They also said I caught every ball and had a good day overall at everything.

“This offer is a big one for me and Iâ€™m super excited. Coach [Kevin] Wilson texted me and said to call him, and thatâ€™s when he said I had a scholarship there.”

Royer’s recruitment has taken off in the last few weeks, and he’s added offers from Michigan, Penn State and others. Hours after hearing from the Buckeyes, he tripped to Ann Arbor and spent Saturday with the Wolverines as he continues to assess what happens next for him.

What Ohio State should expect is for the 6-foot-5, 225-pound Royer to be back on campus over the June 21 weekend in ColumbusÂ if he’s anywhere near a decision in his recruitment. One of the major keys from here will be getting to know the other guys being recruited heavily by Ohio State and seeing how he fits in among them.

As for Luke Lachey, there was no offer given in his direction yet. Ohio State is looking for a pair of tight ends in 2020, and with an offer out to Royer now, the waiting game for a decision from out-of-state players like Cam Large and Jalin ConyersÂ becomes important for Lachey’s chances of earning that offer a little later in the process.

Earlier this week, Lettermen Row introduced readers to North Carolina receiver Gavin Blackwell, a 2021 prospect from Sun Valley High School in Monroe. Blackwell raved about Ohio State and called it a “dream school” before he made his first trip to Columbus, and he was just as effusive in celebration of the school and the program upon his departure.

“It was a lot more than I expected it to be,” Blackwell said. “Coming into the visit, I didnâ€™t really know what to expect. But just going through the day and seeing everything and talking to the coaches made it so much better.

“When I was at the camp and during the visit, all the one-on-one attention and work that I was getting stood out the most. Seeing all the knowledge [assistant receivers coach] Keenan Bailey and [Ohio State receivers coach] Brian Hartline was teaching and talking to Coach [Ryan] Day was awesome. I also had a pretty good camp day, so that was pretty cool.” 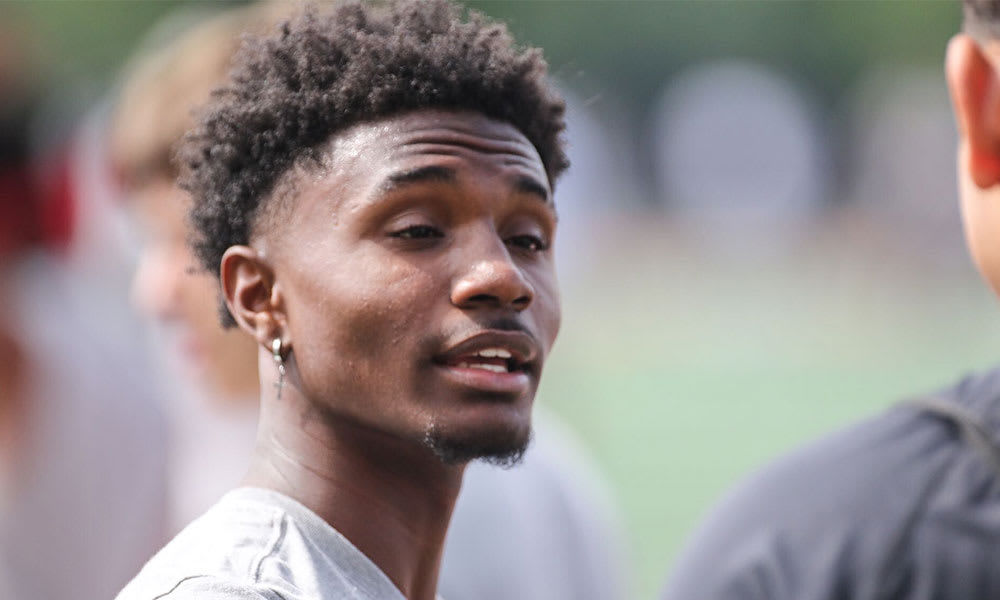 The 5-foot-11 wideoutÂ did have a pretty good camp, clocking in with a sub 4.5-second time in the 40-yard dash and catching everything thrown his way. He’s headed back to North Carolina with a lot to think about in his recruitment.

“I’m really just going to try and focus on getting my family to Columbus so they can see it for themselves,” Blackwell, who already has an Ohio State offer, said. “And maybe take a couple more visits over these next couple of weeks. I’d like to visit North Carolina, South Carolina and Maryland.”

Ohio State is hosting a pair of its top safety targetsÂ for an official visit over the weekend of June 21, but New Jersey’s Jordan Morant is not among them. The country’s 10th-ranked safety per theÂ 247Sports.com composite rankings is taking that trip to Columbus during the season. On Friday, he released his top-five schools, cutting his list in halfÂ — and the Buckeyes are still included.

“Ohio State is still in my top list of schools becauseÂ  I can really see myself going to Ohio State,” Morant told Lettermen Row. “Itâ€™s such a great school to be at, especially with the culture and how good the program is every year. I have a great relationship with the coaching staff, and I just think I feel very comfortable being there. I really like the atmosphere there. so I think Ohio State really deserves to be up there.

“The only thing next is pretty much to take an official up there when I have the time.”

Does Morant’s decision to visit Michigan — the supposed frontrunner in his recruitment — and Penn State in June rather than during the season give them an advantage over Ohio State? The 5-foot-11, 212-pound defensive back said there’s no reason to read between the lines.

“Itâ€™s just how everything worked out I guess,” he said. “But I want to take an official and come out and see a game and how the game atmosphere is there at Ohio State.”

A decision is expected to be made public by Morant during the Adidas All-American Game on Jan. 4.

The tight end thatÂ did get offered by Ohio State following the camp Thursday was 2021 standout Jordan Dingle from Bowling Green (Ky.)

The 6-foot-4, 230-pound rising-junior followed that camp performance and offer by repeating the process at South Carolina, who offered on Saturday, giving him seven early scholarship opportunities. His visit at Ohio State included a little time with Buckeyes tailback Master Teague, who Dingle grew up with.

“We got a chance to hang out with Master,” Dingle told Lettermen Row. “He showed my family and me around the facilities. I feel like the Ohio State offer will cause other big-time schools to take notice of me.

“The camp was great, and I enjoyed Coach Wilsonâ€™s intense style along with the motivation he used throughout the camp to keep us going.”

Ranked early as the country’s 15th-best 2021 tight end, Dingle is a player to watch closely moving forward as his recruitment heats up.