But it hasn’t hurt the Buckeyes yet.

Just about any program would willingly trade places to deal with the issue Ohio State has now, since figuring out how to extend its utterly dominant stretches over four quarters is the best kind of problem it could have while winning without its best performances.

Ohio State beat an undefeated, top-10 opponent despite having its Heisman Trophy-candidate quarterback throw three interceptions, its secondary get picked apart for an entire half and its vaunted offensive line struggled under a relentless barrage of blitzes. But it also never trailed and led by as many as four touchdowns against Indiana on Saturday at the Horseshoe, strengthening its grip on the Big Ten East Division with a 42-35 win that really had no business being that close.

So, yes, it’s a positive that the Buckeyes can stay unbeaten without playing its best. But if Ohio State is going to finish its business in the College Football Playoff this year, it’s probably not going to be able to get away with only playing to its full potential one half at a time.

“Definitely not pleased,” Ohio State coach Ryan Day said. “I’m a long way from pleased. We’ve got a ways to go, but we’ve played four games and it’s almost Thanksgiving. It’s just very, very bizarre. There is so much that has gone into this season that these kids have been through, to the average person, they don’t quite get that part of it. They wouldn’t understand. But when you’re in an environment like this when there are no fans and you have to bring your own energy, it’s just a different dynamic. I think that’s why you’re seeing so many strange things that have gone on this year.

“I’m not making excuses. I’m just calling it for what it is. We have to keep growing and get better and learn to adapt in this environment. It seems to me that whatever the reason is, the last two weeks we just haven’t been able to finish that. … We’ve got to coach better, and we’ve got to execute better.”

The challenges are certainly unique this season, and that can make it harder to pin down a few problems — or even to decide if some of them are even real. Winning remains the most important thing for the Buckeyes, and they did that yet again to take control of the East Division while also providing some lessons for Lettermen Row about where they need to go from here. 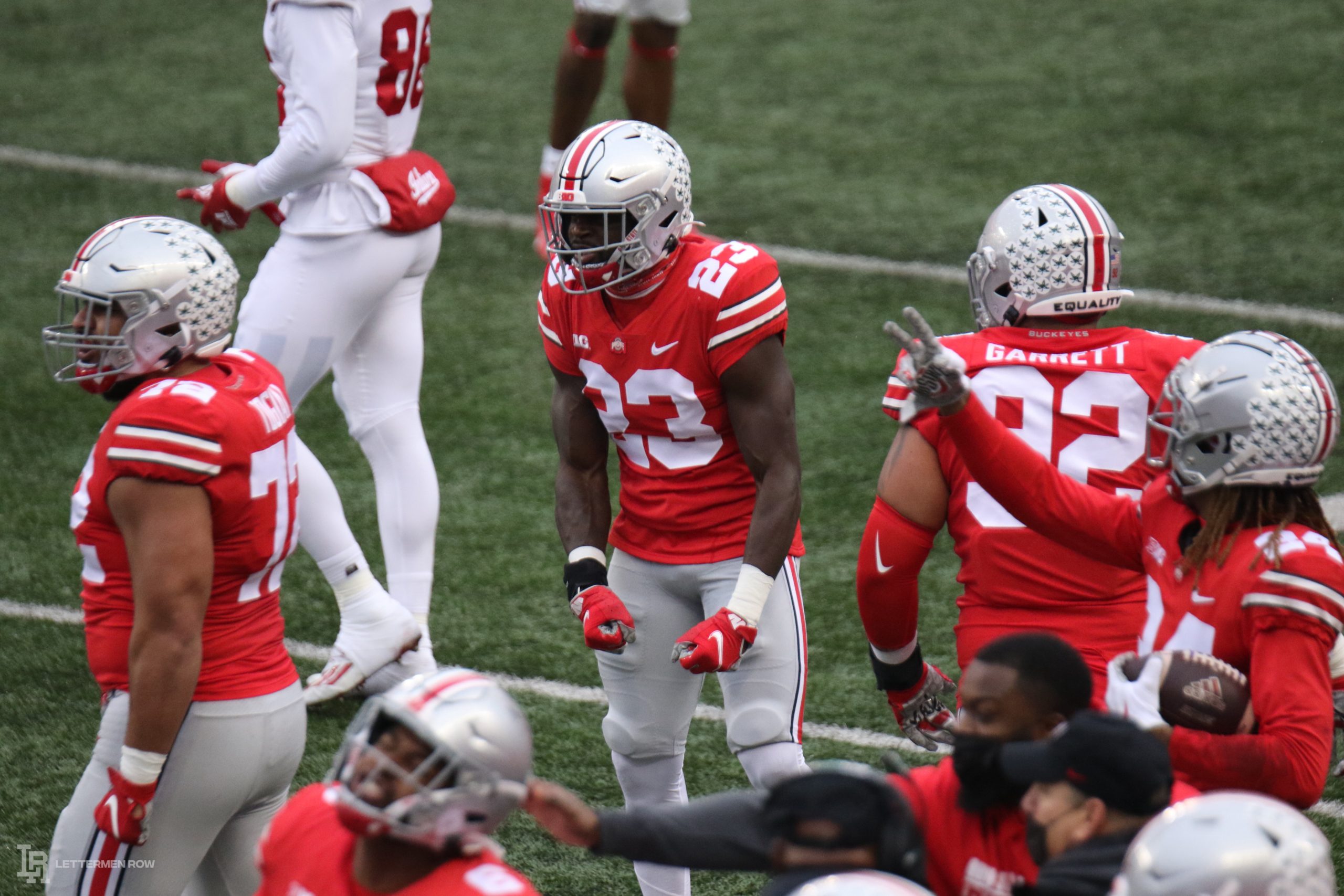 Freaky plays in a comfortable win one week or potential disinterest against an overmatched opponent the next made it easy to rationalize the big plays Ohio State was giving up through the air early in the season. And if the Buckeyes want to, they can still point to injuries and inexperience as potential excuses for what’s going on in the secondary.

But Ohio State needs to be honest about the breakdowns, because its undoubtedly trending in the wrong direction in the defensive backfield right now — and that simply won’t fly against teams like Clemson or Alabama when a national title is on the line. The Buckeyes recruit at the highest level in the country in the secondary, and they can’t afford not to give the younger guys a look when safety Marcus Hooker is routinely out of position or cornerback Marcus Williamson is getting beat or missing tackles. If Ohio State still believes in those two guys instead of wanting to test out Bryson Shaw and Ronnie Hickman at safety or Lejond Cavazos and Ryan Watts at cornerback, then defensive coordinator Kerry Coombs will have to figure out if his scheme is the problem. Either way, the second half against Indiana is going to lead to difficult conversations for the Buckeyes.

Ohio State wasn’t flawless in pass protection, and it probably never will be considering all the exotic looks and blitzes the offensive line is going to keep facing for the rest of the season. Is it frustrating for the Buckeyes to give up five sacks or see Justin Fields get rattled for probably the first time in his career leading the program? Absolutely, but racking up 600 yards of offense honestly more than makes up for it.

Opponents have no choice but to dial up the pressure against Ohio State when the alternative is simply letting Fields and two of the best wide receivers in the country slice them apart through the air. Indiana had a measure of success with its blitz packages thanks to Fields making a couple uncharacteristically poor decisions with the football — but it also fell behind by four touchdowns in the process. The Buckeyes have endured some growing pains with two new starters in the lineup up front, but they should only improve from here as dealing with a relentless assault of blitzes becomes their new normal. 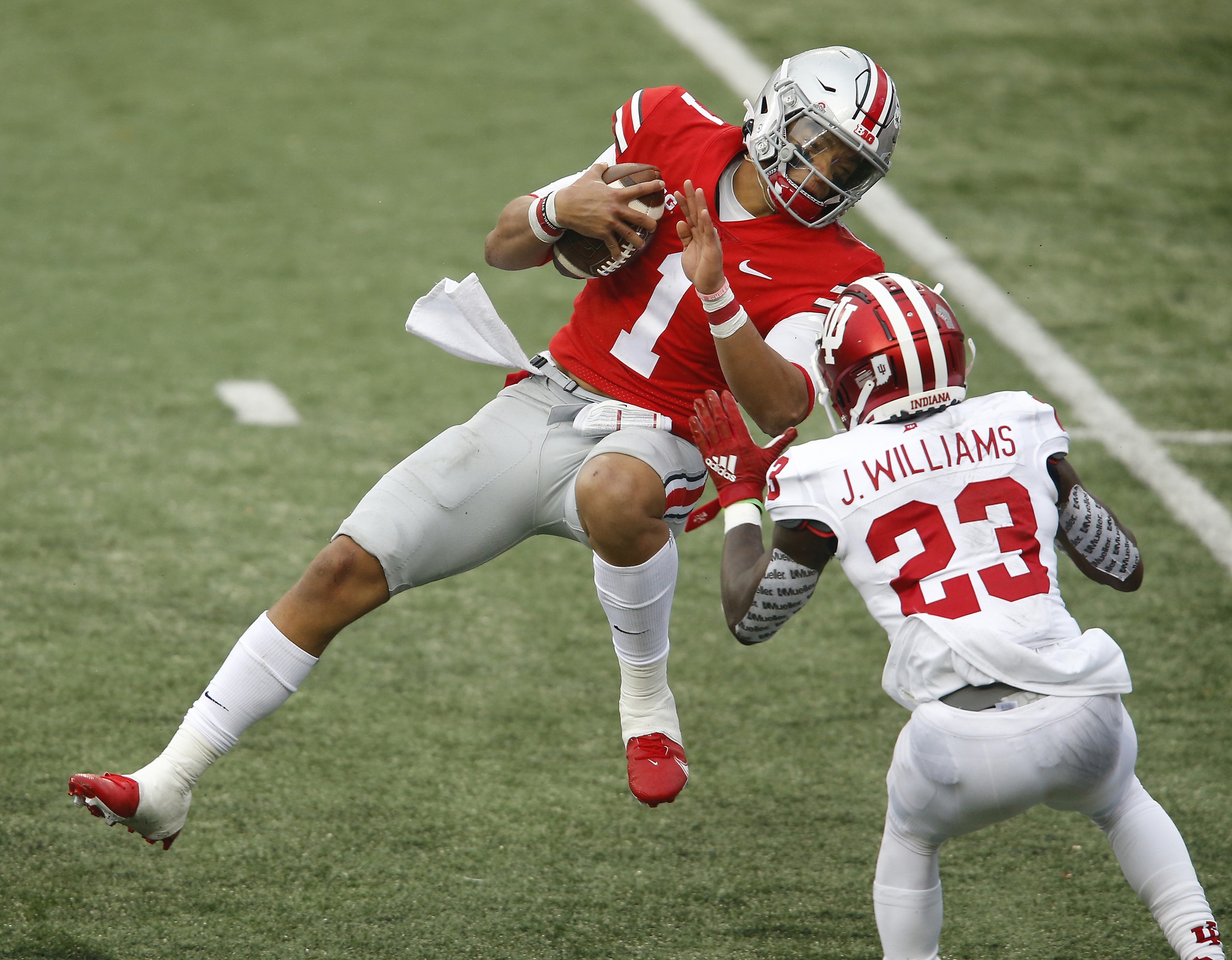 One new tribute to the brilliance of Justin Fields? The junior quarterback can throw three interceptions and the only real impact that had was dinging his bid for the Heisman Trophy. Just about anybody else at that position wouldn’t even come remotely close to not only leading his team to a win over a top-10 opponent, but also capping it off with 300 yards passing and three touchdowns. Odds are the blemishes on the stats sheet will be what catch the eye of Heisman voters, and that’s unfortunate for Fields since he’s unlikely to ever have an outing like that again for the Buckeyes.

The strangest part of it all is that Fields can generally be considered a risk-averse quarterback, going to great lengths to avoid putting the Buckeyes in jeopardy while relying on his athleticism to extend plays if he doesn’t like the throwing window. He did misread the coverage on his first pick, but it might still have been completed if the ball hadn’t slipped out of his hand. The other two have no explanations, but it’s a safe bet that Fields will turn those into learning lessons and that he’ll be intent on making up for his mistakes next week at Illinois.

Where would the Ohio State defense be without those veteran linebackers? Considering some of the inconsistencies with the pass rush and the second-half collapse of the secondary, that might be a scary thought for the Buckeyes. More likely it’s encouraging for the coaching staff since it knows what it’s going to get from that unit every week, and the strong start from that trio of linebackers was critical in allowing Ohio State to build that huge lead in the first place — while also providing a safety net until the Silver Bullets can figure out the rest.

The problems of two seasons ago for the linebackers are a distant memory now. Werner, Browning and Borland battled through the rough patch and are all the better for it.