COLUMBUS — Apparently the challenge this spring for Ohio State just wasn’t big enough for the linebackers.

The Buckeyes were already facing a critical camp as they try to replace four seniors and completely revamp the starting lineup. But the next-most productive tackler is now on the shelf as well, leaving the program scrambling for experience and with little choice but to embrace a relative youth movement.

Yes, Dallas Gant will eventually be fully cleared this summer following a foot injury. And both Teradja Mitchell and K’Vaughan Pope have spent multiple years in the program and contributed off the bench in the past. But an already daunting task for linebackers coach Al Washington is now even tougher, providing perhaps the biggest, most unique test of his career.

“It is a great challenge in a lot of ways,” Washington said on Thursday. “But in the same breath, this is the evolution of football — especially in college. This is why they come to Ohio State. This is what it’s about. The next guy is up. Take advantage of your opportunity. Believe in yourself. Compete. Every day identify the things you need to improve on. That’s been our message: Hey, we’ve got to be fully conscious every day, and we’ve got to be really hard on ourselves. We have to be focused on how we can improve, and over time we’ll get better.

“You coach long enough, these things happen. But I’m fortunate that the four guys that left did a great job of setting the example. … I think the young guys having witnessed that and being in the same room with them to see how they developed and how they grew helps. We don’t really talk much about it. Our standard is our standard, and the next guy is up. We’ve got to uphold that standard.”

One way or another, that mission will fall to a completely new rotation of starting linebackers. And while there are still some veterans around who have the inside track to claim those open jobs, the competition and the development of the entire unit will be crucial for the Buckeyes considering what all they lost in the offseason.

How is that process playing out so far for Al Washington? Here’s what Lettermen Row learned after the linebackers coach and a couple Buckeyes chatted with the media on Thursday. 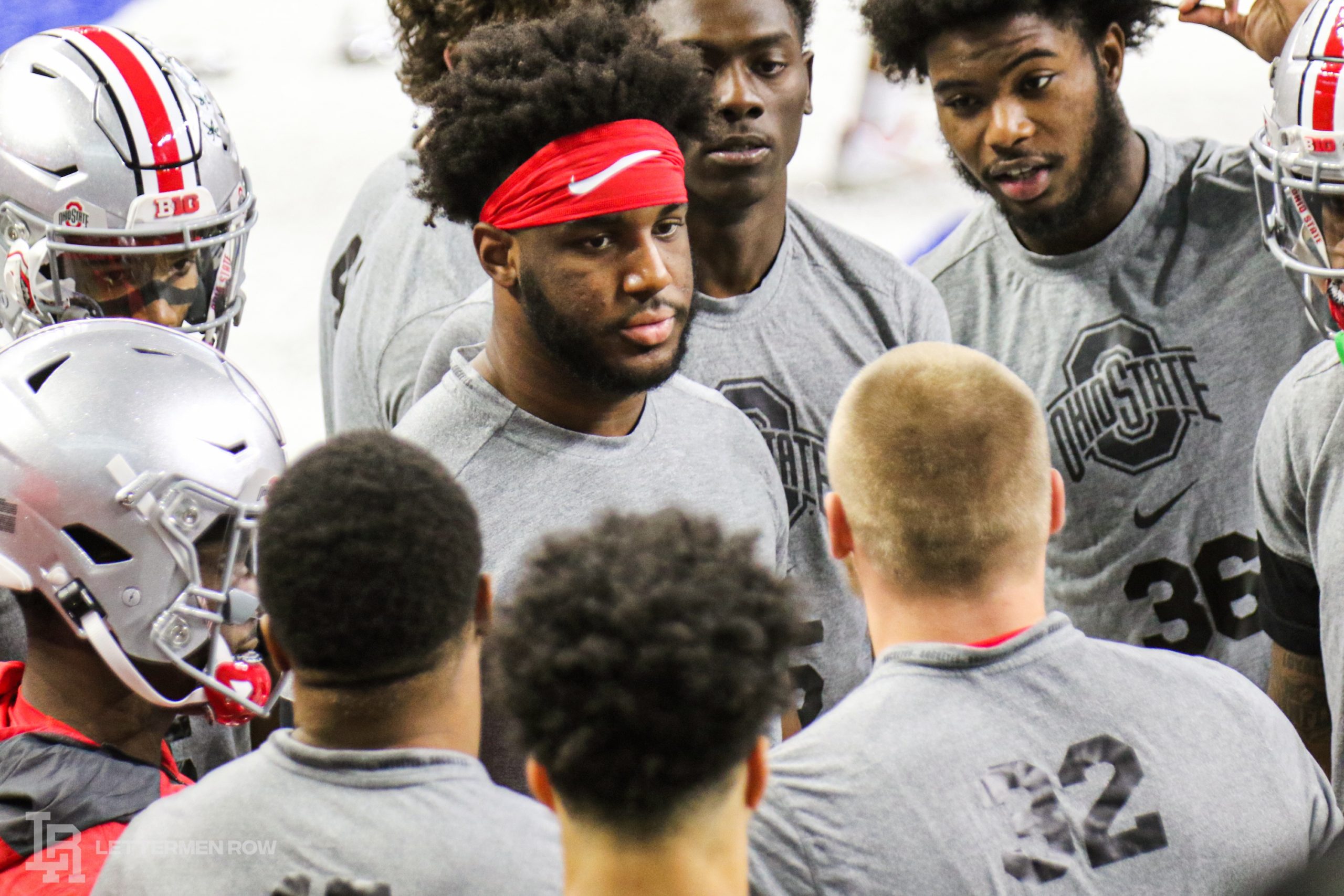 Missing one camp was tough, but last year Dallas Gant was in the same boat as everybody else when the practices were cancelled due to COVID. Losing aÂ second camp? That certainly isn’t any easier for the senior linebacker, particularly since he’ll have to watch the rest of his teammates while he recovers from a foot injury — and considering the opportunity that was in front of him.

Gant has patiently waited his turn behind the upperclassmen and showed last year in a reserve role that he has the tools to be a reliable middle linebacker for the Buckeyes. Nothing has really changed in that regard, but clearly the preference would be to have him involved physically in March and April to continue his growth and solidify himself as an on-field leader.

“I mean, obviously it’s hard,” Gant said. “Spring is a time to develop your skill set and stuff like that. But things happen, and you just have to find a different way. If it means watching more film, different types of lifting, I’ll just focus on the things that I can focus on to develop even though I can’t practice with my teammates and all that.

“It’s tough not being able to practice, but being back by summer, I’ll be able to develop myself pretty well — it will just be closer to the season in that aspect.”

The Al Washington will-he-or-won’t-heÂ saga turned into one of the biggest offseason storylines for Ohio State, and clearly that wasn’t his intention.

Washington has always been a no-nonsense type of assistant, so the soap opera that accompanied Tennessee’s attempts to hire him as a defensive coordinator brought attention that was both unwanted publicly and uncomfortable for him privately. Ultimately he elected to stick around in Columbus to be part of a program he repeatedly called “special,” to stay close to his family and to work with the talented group of young linebackers on hand for the four-time defending Big Ten champs.

“I was extremely disappointed and frustrated, because that was a private situation that was made public,” Washington said. “That was very discouraging. First time in that situation, that was obviously something that irritated me. I’ve moved on and we’re focused on the here and now and we’re rolling.” 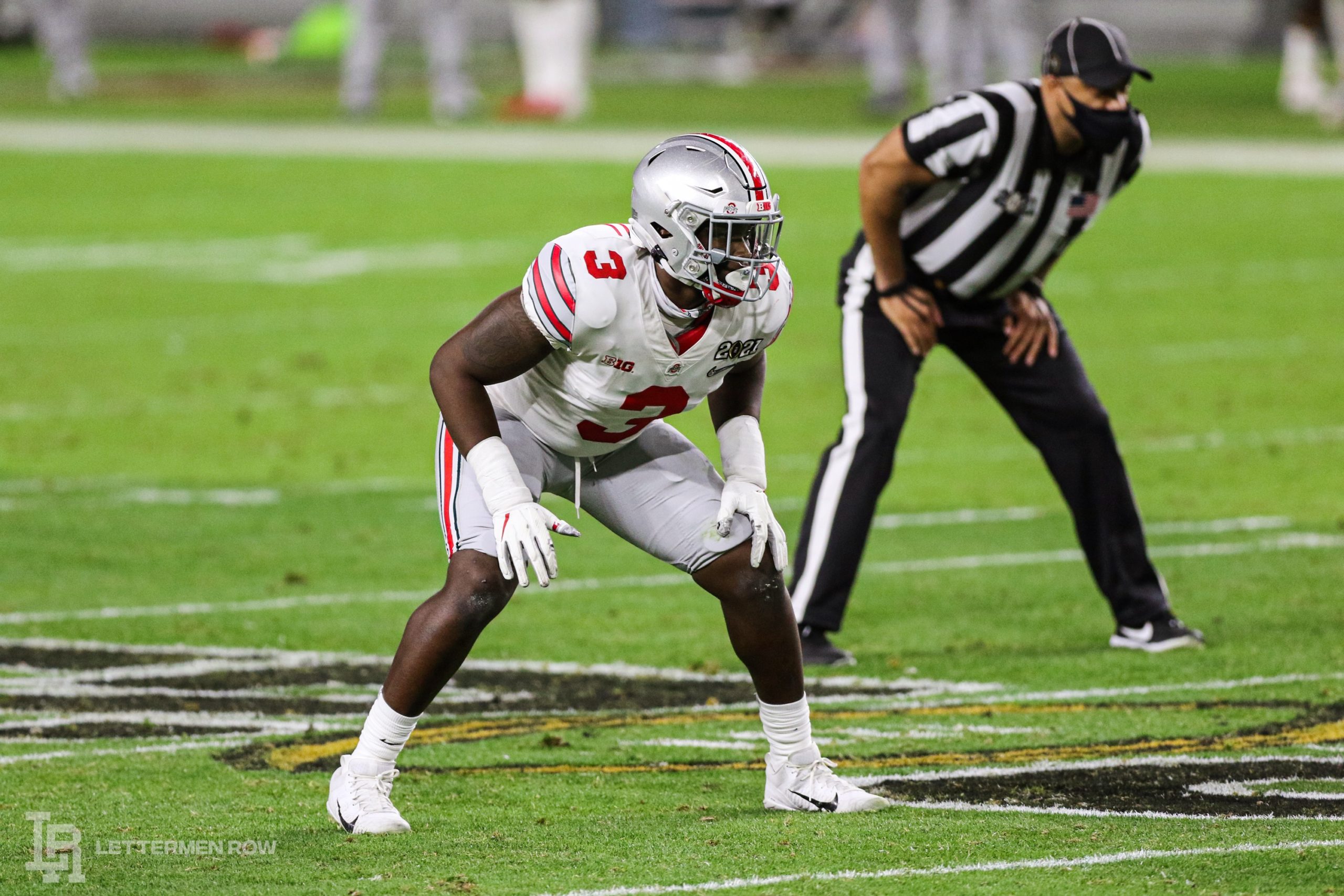 The vegan gospel is spreading at Ohio State. And while it might not have been a huge surprise for a quarterback to use that diet, the benefits espoused by Justin Fields last season caught the eye of a linebacker — and Teradja Mitchell is also now on board.

Always a thumper with a stout frame, Mitchell has dropped roughly 20 pounds from his heaviest point at Ohio State. So far, that appears to be giving him the desired results when it comes to both his athleticism and his energy on the practice field.

“I’m playing at a lighter weight,” Mitchell said. “Naturally I’m a big guy, I’ve always been that way and I’ve been as heavy as 255 [pounds]. But during the season I switched to a vegan diet, so that kind of helped me drop. I just added fish back into my diet, so I guess you could say I’m pescatarian now. It’s definitely helped me drop weight.

“It makes me feel a lot better. When I wake up in the morning, I feel good. Even on the field now, I’m really into it and feel much faster, feel quicker, I have a lot more energy than I’ve had in previous years. It makes me feel good.”

There is no time for Ohio State to feel sorry for itself about what its’s losing. Instead, the Buckeyes have to simply embrace the open opportunities afforded by a clean slate and a wide-open competition for the top-four spots on the depth chart.

Guys like Tommy Eichenberg, Cody Simon and Mitchell Melton all have legitimate paths to playing time this fall now. And strong camps in March and April have long been springboards to starting jobs in September — as long as that urgency to take the torch is there.

“The unit is looking very strong, their attitudes have been great and the best thing we have is competition,” Washington said. “I think everybody is competing, so when that happens, you get everybody’s best. We still have to improve every day. We’re only three practices in, but you can see the growth every day. Our goal is to be better at the end of the 15 practices in every way leading into the fall.

“It’s been a good thing, it’s been a positive thing so far.”