The speculation, debate and conversations about Ohio State never end, and Lettermen Row is always ready to dive into the discussions. All week long, senior writer Austin Ward will field topics about the Buckeyes submitted by readers and break down anything that’s on the minds of the Best Damn Fans in the Land. Have a question that needs to be tackled, like the one today about the Ohio State linebackers heading into the summer? Send it in right here — and check back daily for the answers.

Are the linebackers being grandfathered in or was it a real competition. It seems like the starters from last year were given the benefit of the doubt to be the starter.

The competition isn’t over for the Ohio State linebackers.

Really, spring was just a starting point since new position coach Al Washington was getting his first chance to evaluate the personnel, the Buckeyes were just beginning to learn a new scheme and there was no real urgency to establish a definitive depth chart.

So, it’s true that Malik Harrison and Pete Werner were given the first opportunities to hold on to their jobs as the starting outside linebackers. Returning captain Tuf Borland was still playing a prominent role for the Buckeyes when his health allowed it. And despite the impressive camps turned in by guys like Dallas Gant, Baron Browning or Teradja Mitchell, the younger guys still haven’t necessarily done enough to force Ohio State to shake up the pecking order.

That doesn’t mean anybody is just going to inherit their previous roles or that there is no room for movement if somebody like Mitchell makes it clear that he must be on the field in the middle. But there is absolutely value in having previous Big Ten experience, multiple years of strength development in the program — and previous glimpses at the upside all of those returning starters could bring to the Buckeyes when put in better position to succeed. 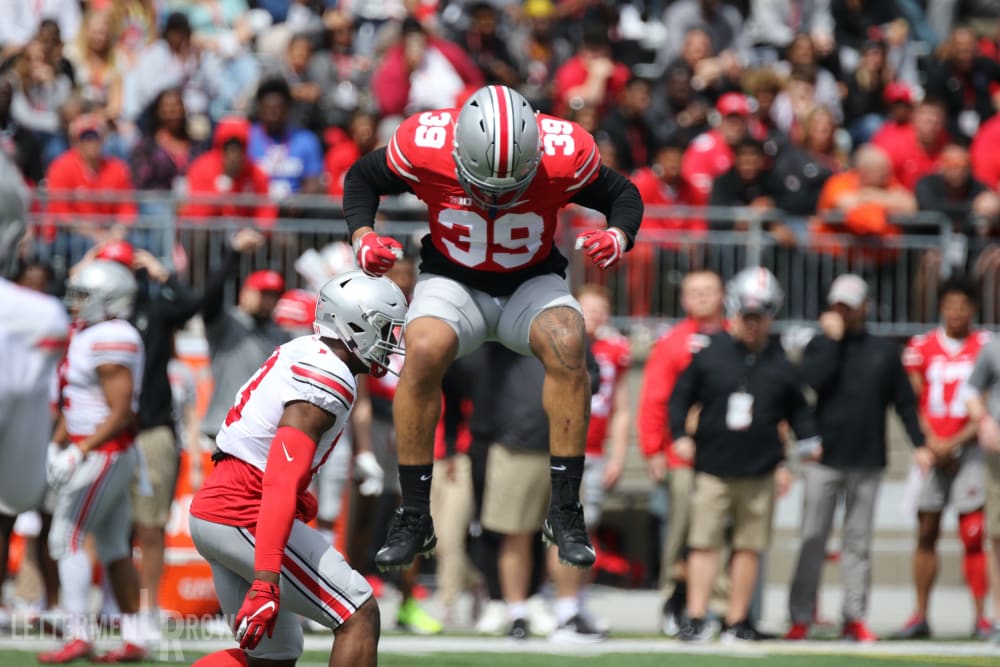 Ohio State linebacker Malik Harrison is a safe bet to stay in the starting lineup for the Buckeyes. (Birm/Lettermen Row)

The only truly safe bet at this point is that Harrison isn’t leaving the lineup anytime soon. But it’s worth a reminder that both Werner and Borland previously earned their jobs for a reason. The new coaching staff might be just as likely as the old one to be impressed with some of the athletic plays Werner can make in space and the toughness Borland provides as the quarterback of the unit.

Were there inconsistencies with all three returning starters last year? Of course. But there was no reason for Washington to come in and ignore what those guys have already given to the program during spring camp as he started the process of making up his own mind about who fits best with what the Buckeyes are trying to do.

Virtually every position is going to carry competitions over into training camp, and linebacker is certainly no exception. That’s both by design and perhaps necessity. Ohio State is still in the early stages of figuring out what all it will do in terms of scheme and personnel, and the math in both areas can get complicated when the Bullet position is factored into the equation — potentially taking one linebacker off the field.Â Beyond that, the Buckeyes will still want to see Mitchell and Gant keep improving physically over the summer and potentially into the first few weeks of the season before coming to a conclusion about whether they can do the jobs those other guys have already done.

The competition is real at linebacker, because the Buckeyes simply can’t afford not to explore every option in August. There might not have been many shakeups in the spring, but that doesn’t guarantee anything by the fall.