Just in time, Ohio State established itself again as a realistic title contender

Enjoy it, because itâ€™s not something that is permanent or guaranteed every week as November rolls along in the Big Ten. But the label was definitely well earned on Saturday at Spartan Stadium.

Itâ€™s been a rough few weeks for the Buckeyes, who were technically still in the mix to accomplish everything they wanted to this season but seemingly on the outside looking in among the programs chasing championships.

The College Football Playoff selection committee made it quite clear it hadnâ€™t been impressed with the recent efforts as it locked Ohio State into the No. 10 spot in the rankings. Portions of an uneasy, passionate fan base appeared to feel like the sun was about to fall out of the sky in Columbus. And even the Buckeyes werenâ€™t celebrating much when were grinding out wins — and they obviously werenâ€™t happy about the embarrassment at Purdue.

But Saturday should effectively erase all of that for Ohio State after it weathered tough shots from both Mother Nature and Michigan State and ultimately wound up with a 26-6 victory to show for it. There is absolutely nothing for the Buckeyes to apologize for when it comes to a performance like that, and they certainly didnâ€™t feel the need in the most juiced-up celebrations in weeks.

â€œIt was electric,â€ Ohio State quarterback Dwayne Haskins said. â€œThe atmosphere we had after a win like that, it meant a lot to people. We didnâ€™t play our best ball, but the good thing is we have another game to play and weâ€™ve got a lot of potential. We can keep getting better. Thatâ€™s a tough team, they always play us extremely hard, theyâ€™re the No. 1 rush defense in the country.

â€œThey gave us a tough time. But it wasnâ€™t supposed to be easy.â€ 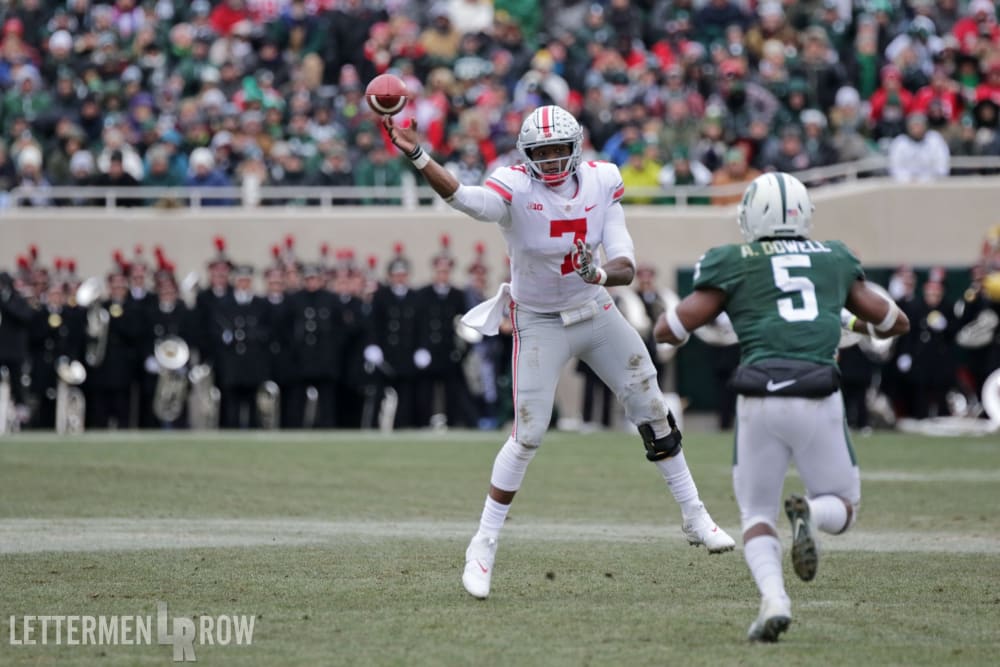 Nothing came easily for Dwayne Haskins and Ohio State, but it claimed a huge win at Michigan State. (Birm/Lettermen Row)

Just ask Michigan how hard it is to come to this building and deal with Mark Dantonioâ€™s team. Think the Wolverines feel like they needed more style points after their 21-7 win in the same building? Dream on.

So, sure, Ohio State struggled to generate much offense for a majority of the afternoon. No, the game film from the first half isnâ€™t going to be passed along to the Hall of Fame. Yes, Michigan State is almost comically inept with the football.

But the Buckeyes finished in the fourth quarter by proving their toughness on the ground with Mike Weber pounding away until he had a 104 yards and a touchdown. Michigan Stateâ€™s best hope was to muck stuff up and try to turn the matchup into a slugfest — and it wound up getting punched in the face. And after weeks of uncertainty for the Silver Bullets, they still had to execute time after time to hold the Spartans to a grand total of two field goals on the scoreboard.

Was that not stylish enough? How could it not be? The selection committee is the one that put Michigan State in its rankings, and watching Ohio State post a 20-point win on the road in the cold should carry a lot of weight if the members are actually paying attention.

â€œWe knew exactly what this would be, and thatâ€™s what it was,â€ Buckeyes coach Urban Meyer said. â€œNovember football at Michigan State. Everything about that was really hard against that team.

â€œThat was a big one, and weâ€™re very satisfied. The other ones people kind of didnâ€™t feel like they won. This was a great locker room, thatâ€™s the way itâ€™s supposed to be. Enjoy the win and get ready for the next one.â€

Itâ€™s the one after that which is going to be the focus of the entire college-football world when the best rivalry in the sport is likely going to have the maximum stakes on the line in the Big Ten and national-title race. 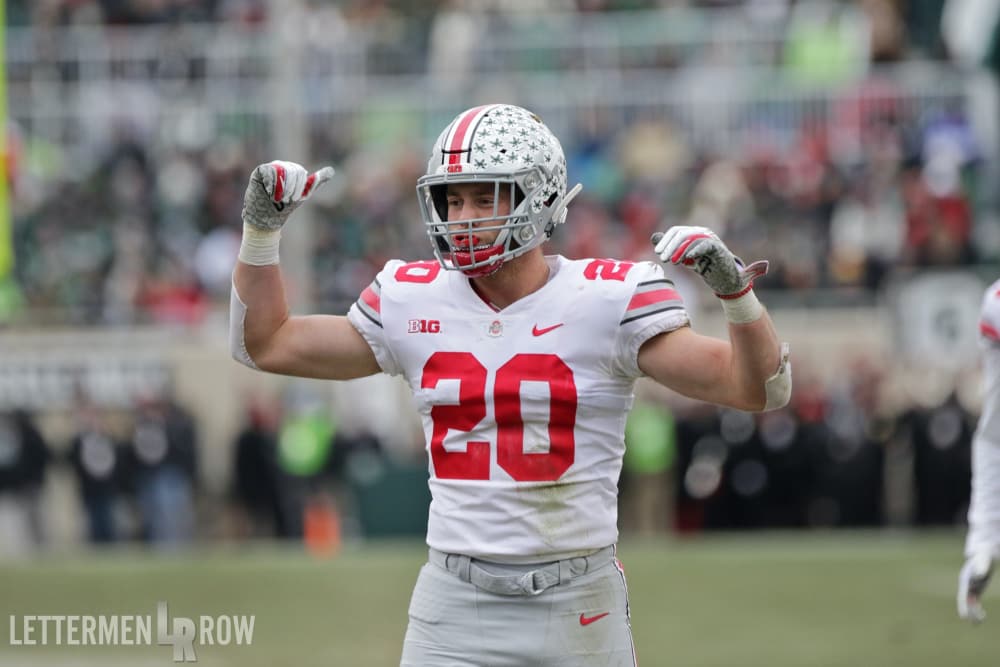 But after what it did against Michigan State, that should once again be a scary thought for opponents instead of a cause for concern in Columbus.

â€œWeâ€™re not where we need to be,â€ Meyer said. â€œDo we have conversations about whatâ€™s going on around the country? No, weâ€™re not there yet. We needed to play some really good defense, tackle well, create some turnovers and we did that. We need to continue to run the ball, and to have a tailback run for 100 yards against these guys is outstanding.

â€œWeâ€™re just driving the nail. Just keep hitting the nail as hard as you can.â€

For the first time in a while, the Buckeyes are again swinging a championship-caliber hammer.