The summer offseason is in full swing, and Lettermen Row is trying to survive it with our annual Position Week breakdowns. By the time all nine units at Ohio State have been covered, training camp and media days will nearly have arrived — and the return of football in the Horseshoe will be just around the corner. Let’s roll right along by turning the attention to the tight ends for the Buckeyes.

COLUMBUS — Mitch Rossi could only chuckle at the suggestion.

Doesn’t the Ohio State walk-on play a position that doesn’t actually exist in the offense anymore?

“I would like to be a fullback,” Rossi said with a smile during spring camp. “I think that’s a good fit for the job description for me.”

Rossi certainly has the skill set to play that throwback position. And once in a while the Buckeyes actually will shift the tight end into the backfield and let him do the kind of dirty work that check all the boxes of a traditional fullback.

Of course, the new-age, power-spread attack that Urban Meyer ushered into the program and Ryan Day has enhanced over the last few years doesn’t officially list that position. But if it did, Rossi’s rugged blocking, relentless motor and some athleticism that was perhaps overlooked when he was coming out of high school would be the ideal fit. 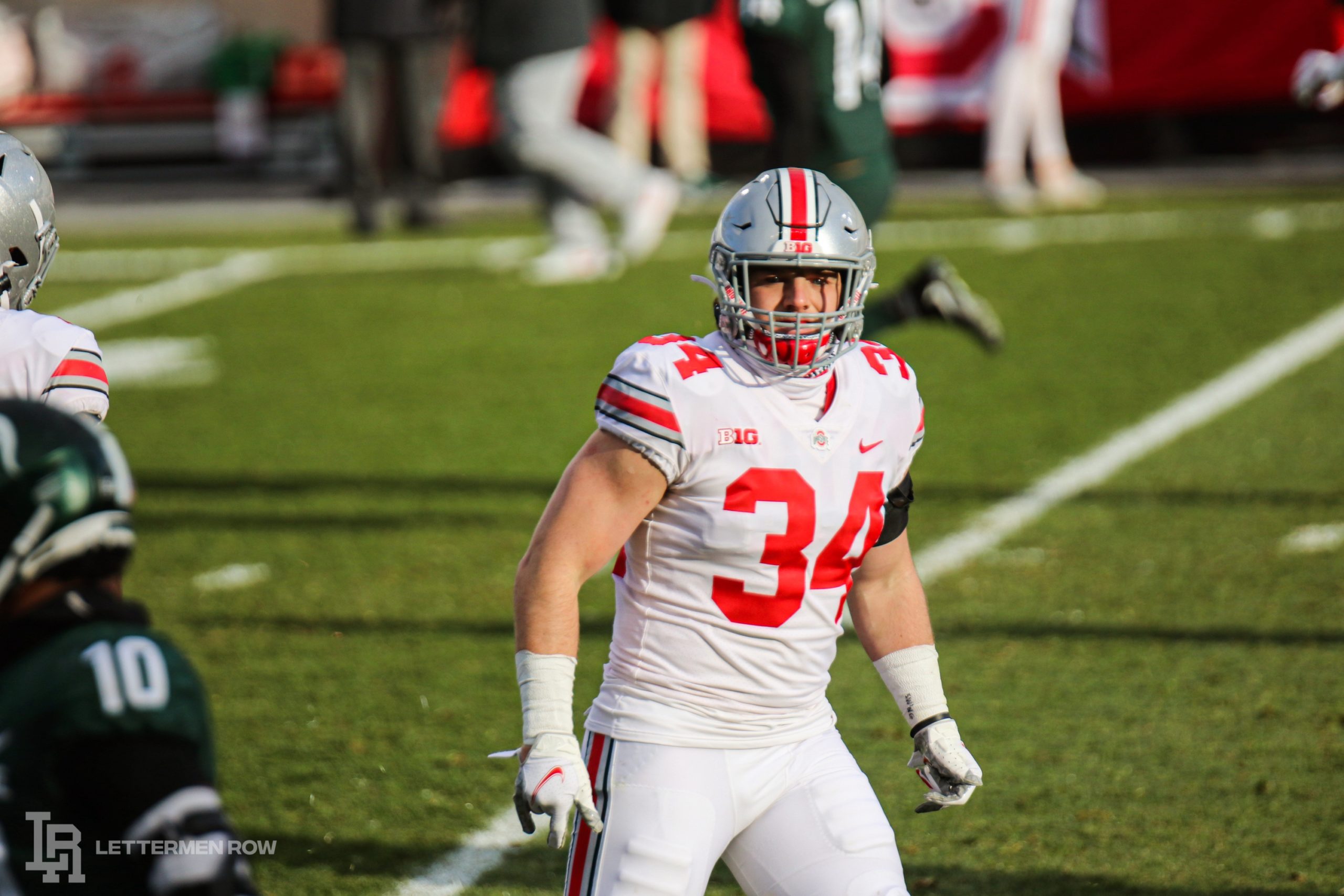 Ohio State walk-on Mitch Rossi has a chance to make an impact for the Buckeyes. (Birm/Lettermen Row)

Ohio State will certainly put those skills to use when the time is right. But it isn’t likely to officially give him the title that suits him best.

“[Offensive coordinator Kevin] Wilson really likes to utilize me as more of a fullback or the H position,” Rossi said. “So, it’s kind of more hand-in-the-ground, old-school kind of stuff that he used to do at Oklahoma with some of those guys. Kick-out blocks, power schemes and everything like that, pulling on counters — that all fits my skill set better, so that’s how they’ve been utilizing me.

“The thing that we value the most more than catches or touches is knockdown blocks. That’s the stat that we like to keep track of the most, so anytime we can put somebody on their back and move a grown man, that’s something we really enjoy. That’s what we pride ourselves on.”

It’s also the surest way to see the field for the Buckeyes coming out of the tight end unit, especially for a walk-on trying to carve out a role and find snaps for the reigning Big Ten champions.

Rossi wasn’t on the radar for Ohio State until tagging along with his high-profile teammate for a visit up from Tennessee, joining eventual signee Max Wray to check out the program. Wray has since moved on as a transfer, but Rossi is still going strong with the Buckeyes — and frequently comes up in conversation with coaches and teammates for his work ethic and the possible ways he could help on offense.

â€œItâ€™s definitely going to be an interesting conversation this year,â€ senior tight end Jeremy Ruckert said. â€œWeâ€™ve got a bunch of guys really coming on strong, developing with Cade [Stover], Joe [Royer] and Mitch [Rossi] really being those guys in there. They all can do all different things really well.

“The versatility of our position is going to be shown more than ever this year.”

In fact, it might even spill over to a position that doesn’t even technically exist on the Ohio State roster anymore.

But if Mitch Rossi gets his way, maybe he can change that.

“I was just kind of lucky to get the opportunity, honestly,” Rossi said. “Me and Max [Wray] went to high school together in Franklin, Tenn., and he got the opportunity to come for a visit — and I just came up with him. Things just kind of fell into place, and I’ve been keeping my head down and trying to take advantage of every opportunity since then.

“Whatever it takes, basically.”

As long as Ohio State calls his number, it can call the position anything it wants.