LINCOLN, Neb. — Ohio State might have consideredÂ it another test, and it clearly passed.

But maybe it’s time for a different grading scale for the Buckeyes. Right now, it’s almost too easy for them, and they’re shattering the bar for success even against Big Ten opponents on the road.

At some point, Ohio State is actually going to face a team where the talent disparity isn’t nearly as wide as the one on display at Nebraska on Saturday night. And obviously that will be a much better barometer of just how good Ryan Day’s program can be this season than the absolute obliteration of the Huskers at Memorial Stadium — whatever the final score ends up being in a game that was over at halftime.

But with the outcome not even close to in doubt after the first two quarters of the latest Big Red Beatdown, Lettermen Row is diving into the Snap Judgments early again with the fifth dominant victory of the season already secured. More coverage will follow throughout the evening and on Sunday, but let’s get it started now.

Justin Fields is ready to use legs for Ohio State

The Buckeyes are just about ready to remove the speed governor on Justin Fields, and that’s only going to make the offense more dangerous as the season progresses. Ohio State had urged caution and safety with the starting quarterback early in the season, and there were plenty of good reasons for that. Day wanted Fields to develop as a passer, the depth behind him is not great and Ohio State didn’t need him to use all of his tricks to get through the non-conference stretch to open the year. But on the road against a Big Ten opponent it respected, Fields was unleashed more and responded with 80 rushing yards in the first half against a shellshocked Nebraska defense. In turn, that opened up more passing windows for the receivers and huge holes for J.K. Dobbins and Master Teague as well, with Fields fueling all of that success. 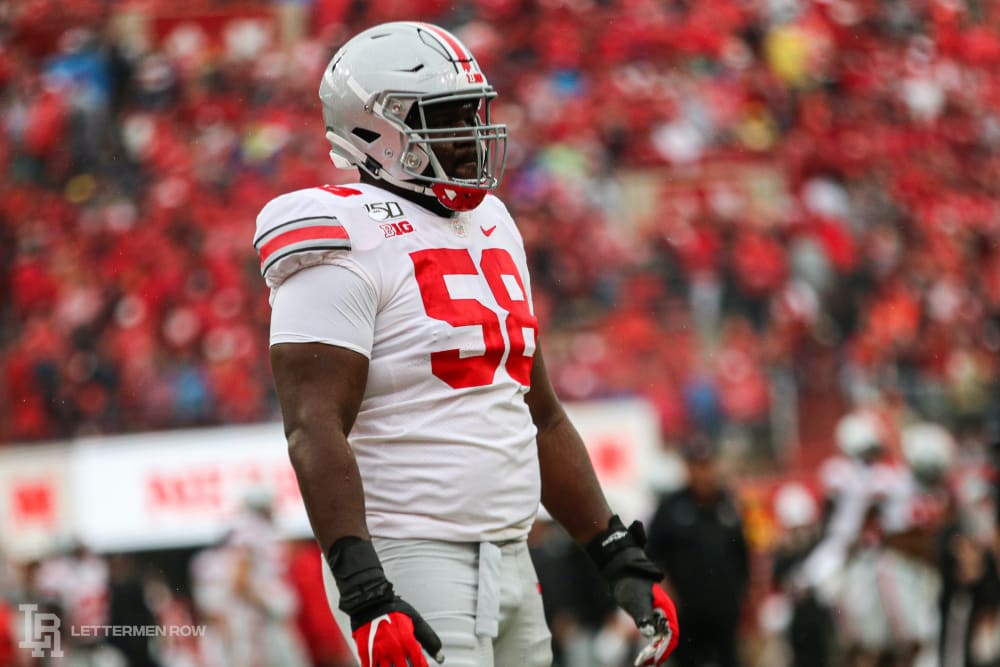 Joshua Alabi can get job done for Buckeyes

There was a time not too long ago when a single injury could have been a disaster for the Buckeyes on the offensive line. But the depth, flexibility and talent has clearly been upgraded up front, so Ohio State had no problem rolling right along when Branden Bowen was ruled out of the lineup on Saturday against Nebraska. Alabi has been called on to fill in for a starter at tackle before, and he responded with a solid outing in the Rose Bowl. Once again, he was the first guy off the bench for the Buckeyes, edging ahead of Nicholas Petit-Frere thanks in part to his veteran experience and a few extra seasons of physical development. It appears Ohio State is in good hands with all three of those tackles once Bowen returns.

Apparently all Jeff Okudah needed to do was get that interception burden off his shoulders. After grabbing the first pick of his career last week against Miami (Ohio) and talking openly about the importance of getting that monkey off his back, Okudah backed up that performance by doubling down with a couple nifty grabs at Nebraska. The first showed exactly why he’s being considered as a future first-round pick, cutting underneath a route with his top-end speed and securing the football on the way to the ground. The second was an example of his luck turning around a bit, but it still required great hands-eye coordination as a high throw from Adrian Martinez was deflected his way while he fell on his back. Look out for Okudah now that he’s bursting with confidence.

Picking just one standout on the Ohio State defense was a challenge given how completely dominant the Silver Bullets were early. And even if Baron Browning’s individual numbers might not have jumped off the stats sheet, the junior linebacker seemed to be popping up in all the right places for the Buckeyes as it bottled up Martinez and the Huskers. There are plenty of guys who have benefitted tremendously from the change in the defensive coaching staff, but Browning might have made the biggest leap of anybody on the roster after looking lost during his first two seasons with the program.