COLUMBUS — The endless speculation about Ohio State quarterback Justin Fields is finally coming to an end.

Whether the conversations were smokescreens, ill-informed opinions, bad-faith evaluations or even some rare positive feedback from people who used their eyes to see what Fields did with the Buckeyes, all of that is about to be over now.

After months under a microscope that is somehow even more powerful than the one he played under for the last two years as the face of a powerhouse program, Fields is going to be selected in the NFL Draft. That’s all that really matters for Fields and the rest of his Buckeyes teammates as scouts and general manages have to make real decisions with the chips finally, mercifully down.

“The crazy thing about Justin is that it doesnâ€™t bother him,” Ohio State coach Ryan Day said. “When I talked to him about it, he said: Let the people talk. He knows eventually somebody is going to draft him and heâ€™ll have to go play.

“All the talk goes away and you just go prove it on the field.”

Fields and the Buckeyes obviously did that plenty while winning Big Ten championships and claiming a Sugar Bowl trophy last season, and another huge influx of talent is on the way to the NFL level from the program.

Where will everybody land over the next three days? Lettermen Row doesn’t have all the answers, but is prepared to make a few Bold Predictions as the NFL Draft kicks off on Thursday night. 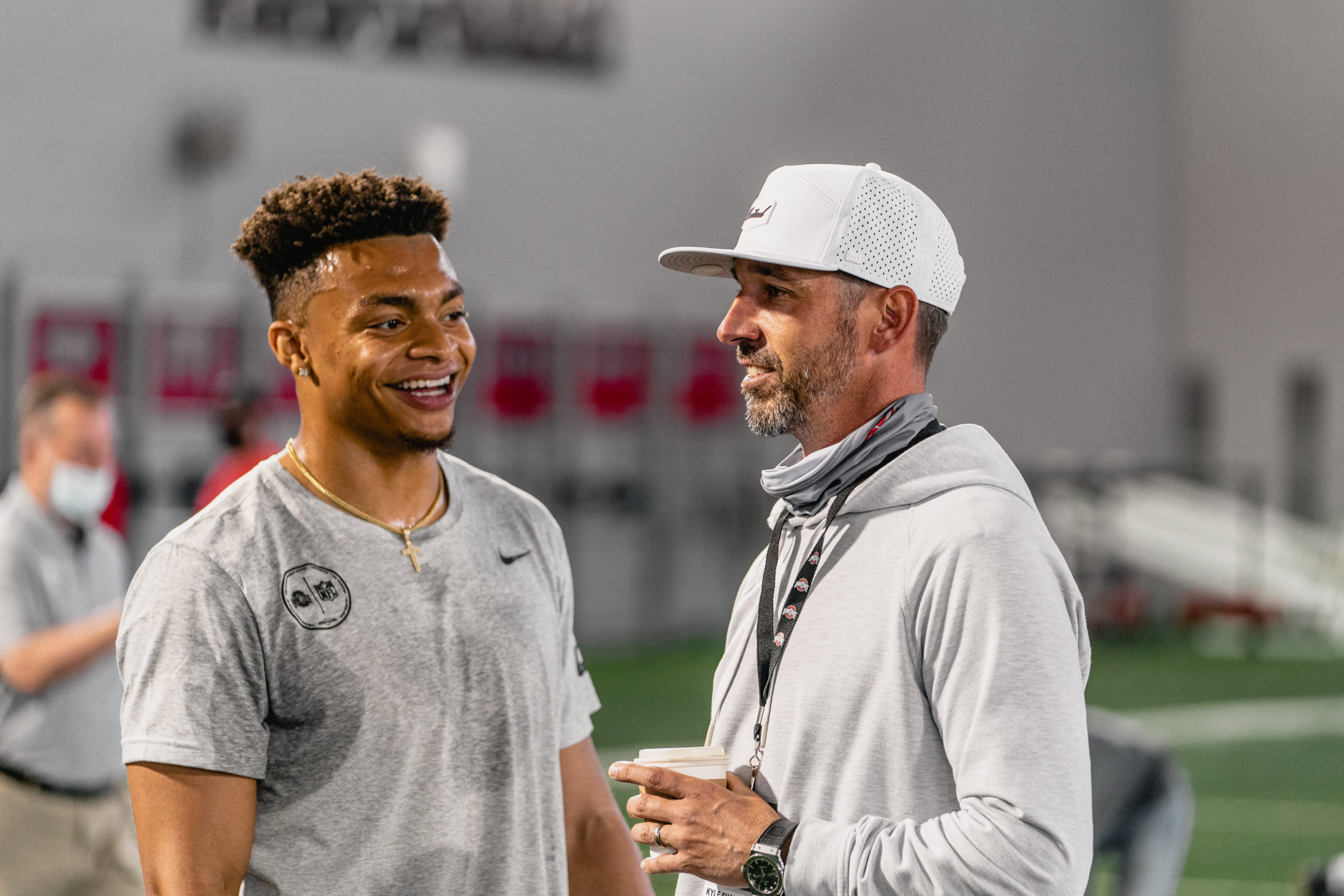 Honestly, the perceived slide of Justin Fields has been baffling and the scrutiny he’s faced over the last couple months has been downright unfair. The Ohio State product certainly hasn’t let it bother him, and all he’s really cared about during this process is getting an opportunity at the next level — no matter when his name is called. But it’s puzzling that somebody who has been viewed as the second-best quarterback in his classÂ at worst is now apparently slipping down draft boards after putting together a virtuoso two-year run with the Buckeyes that validated his lofty recruiting ranking. Focusing on his two worst games instead of the whole body of work is quite simply a stupid way of evaluating Fields, particularly because there are other small samples that show him out-dueling Trevor Lawrence and making a case to go No. 1 overall. Either way, his talent and potential as a franchise quarterback are eventually going to be too difficult to resist. The bet here is he sticks in the top-five picks.

Justin Fields will go in the first round, and Pete Werner may very well do the same. But the player who will surprise folks the most with where he gets picked is going to be linebacker Baron Browning. Size, speed, versatility, production and potential make Browning an intriguing NFL player because heâ€™s truly not come close yet to his ceiling as a football player. His testing numbers confirmed his elite athletic ability, and his willingness to consistently put team ahead of self in his four years in Columbus show why heâ€™ll serve as a consummate professional. Baron Browning will get his name called in Round Two and some NFL team is going to get a future superstar. 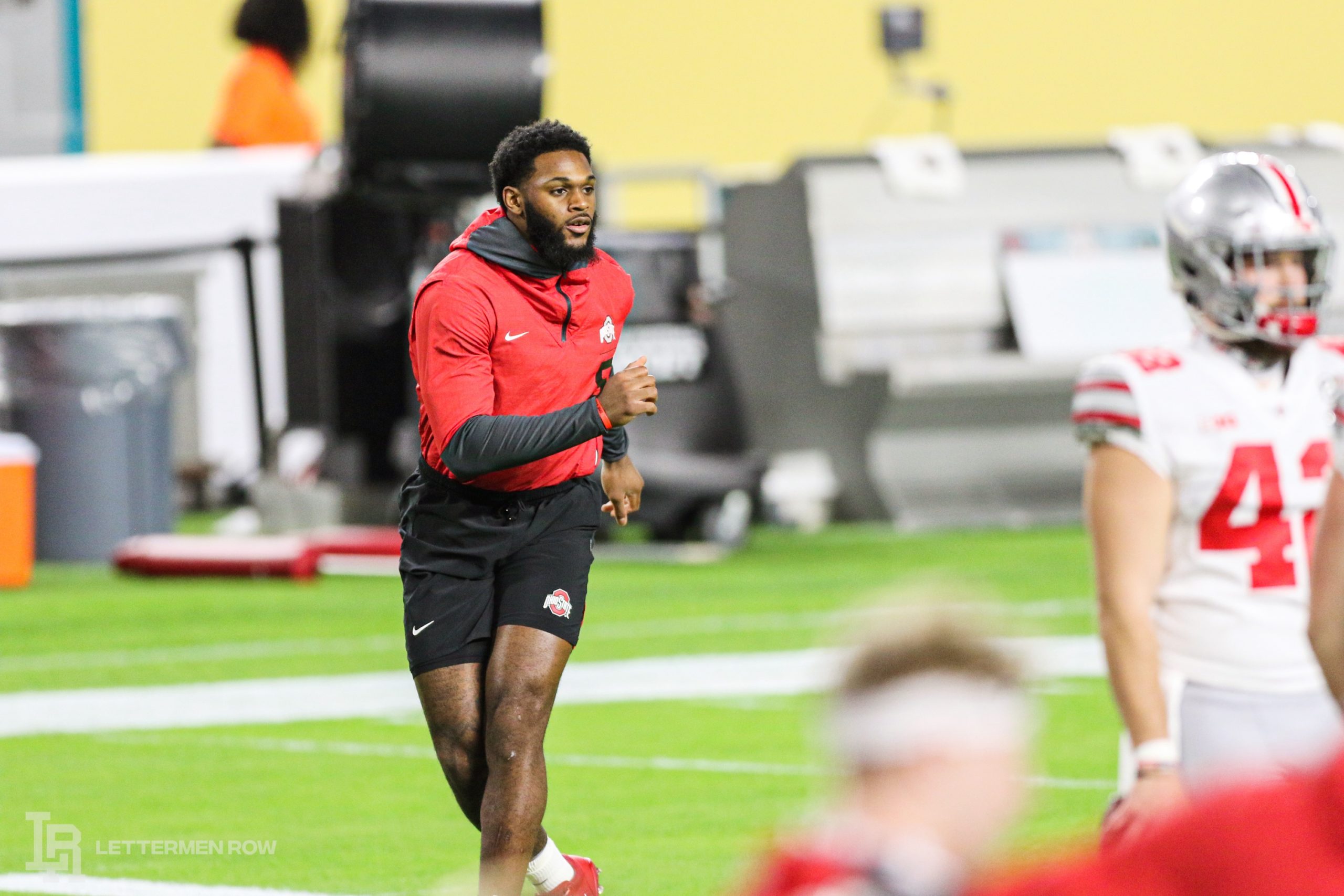 Spencer Holbrook: Josh Myers will be Day One starter

Josh Myers stepped into the starting center role two years ago for the Buckeyes and instantly became one of the best at his position in the country. Now two years later, the underrated Myers will have a chance to do the same in the NFL. I still can’t figure out how there are two (maybe three) centers projected to be selected in front of him, but that’s the draft process. Myers will be a starting NFL center by September, and he just might have the best career of any center in this draft.

Tim May: Wyatt Davis will be next Ohio State bargain pick

What’s always been a perplexing aspect of the NFL draft is quite often teams succumb to the allure of the fireworks that are the skill players in the first round and let slide a player or three who could form the bedrock for a franchise for years to come. That seems to be the case with Ohio State guard Wyatt Davis this year, for whom first-round talk has been intermittent at best. But the grandson of Willie Davis, one of Vince Lombardi’s favorite players on the dominant Green Bay Packers of the 1960s, Wyatt Davis went about his game knocking people out of the way with elite gusto the past three years at Ohio State. It says here that some franchise is going to get a 10-to-12 year stalwart for its offensive line, no matter when his name is called. But he deserves to go in at least the late-first round, even though the teams that really need him are on the higher end of the picking queue. Such is life in the NFL draft.

The New England Patriots need a franchise quarterback, and Cam Newton isnâ€™t the longterm answer. NFL teams are pointlessly overanalyzing Justin Fields, which is why the former Ohio State quarterback will slip out of the top three picks and later in the top 10. With Fields still on the board, Bill Belichick will trade up and grab the Buckeyes product. Not only will Fields be playing for Ryan Dayâ€™s hometown team, heâ€™ll have a successful career. Terrorizing AFC East defenses, he will emerge as the best quarterback in the division within the next five years. Developing and learning under a former NFL MVP will give him time to grow, while Josh McDaniels creates a system for Fields to thrive in.