The speculation, debate and conversations about Ohio State never end, and Lettermen Row is always ready to dive into the discussions. All week long, senior writer Austin Ward will field topics on the Buckeyes submitted by readers and break down anything that’s on the minds of the Best Damn Fans in the Land. Have a question that needs to be tackled, like the one today on Dwayne Haskins and potential first-round draft picks at Ohio State? Send it in right here — and check back daily for the answers.

@AWardSports Realistically, how many members of offense go in the 1st round of the draft after this year?

For an Ohio State offense that clearly has so much firepower and the potential to become one of the most explosive scoring machines in the country, the individual talent might not exactly be moving the needle for NFL scouts and general managers when it comes to first-round draft picks. In fact, looking solely at the crop of Buckeyes that will be available next spring, it’s possible that none of them will come off that board that early in 2019.

Of course, J.K. Dobbins is likely going to be worth a significant investment for an NFL franchise down the road. But the Ohio State tailback is only a sophomore now and won’t be eligible to make the professional leap, so it might be up to that loaded defense to keep the program’s first-round pipeline flowing this season. With Nick Bosa, Dre’Mont Jones, Jordan Fuller and Kendall Sheffield already drawing that sort of attention, that probably won’t be much of an issue.

But on offense, the most likely way to break into the first round will hinge on the development of Dwayne Haskins. If the new starting quarterback explodes the way many are anticipating at Ohio State this season following a productive training camp, Haskins could be in position to forego his final season of eligibility and cash in his professional stock. Considering his arm strength, impressive size and perhaps underrated mobility, there’s no question that Haskins would at least test well for NFL talent evaluators. So if Haskins shows command of the position and leads Ohio State to another Big Ten title, he might just wind up with a first-round grade by the end of the year. 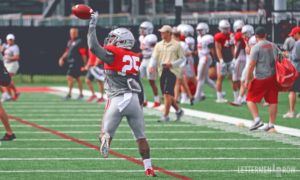 Another solid season for Isaiah Prince at right tackle might also improve his projection as an NFL lineman. And maybe after three seasons in the starting lineup, Michael Jordan might be ready to move on to the next level — especially if he does wind up sliding over to center and shining like the last two guys who made that transition. But it’s hard to find many other Buckeyes who will have that same sort of first-round buzz.

Mike Weber is going to be sharing time in the backfield and will still have doubts about his injury history. For all the depth and some jaw-dropping athleticism at wide receiver, at this point none of the members of Zone 6 have ever performed at a level that would suggest they could be selected that early. And right now, there just isn’t enough experience at the tight end position to even consider that a remote possibility.

That leaves the focus on the quarterback, like usual. And if anybody on the Ohio State offense is going to emerge as a first-round pick, odds are it will be Dwayne Haskins.