Inefficiencies might as well be the buzzword of the week for Ohio State inside the Woody Hayes Athletic Center.

Perhaps most important? Drastically cutting down the on-field laundry every outing.

Ohio State is averaging eight-plus penalties and 76 penalty yards per contest though eight games; thatâ€™s 17 yards and nearly three penalties more per game than the opposition.

This bye week arrives on the heels of the Buckeyesâ€™ first loss since last November — which also happened to be a 10-penalty outing, including a whopping eight first-half miscues as they trailed 14-3 at the intermission.

â€œThere were a couple penalties that were [costly],â€ Urban Meyer said this week on the Big Ten teleconference. â€œYou know, just bad penalties.â€

Too often this season, and magnified by the Boilermakers, those penalties extended possessions when the Buckeyesâ€™ stop-unit had positioned itself to get off the field and give back the ball to the offense. Twice in the second half as it was outscored 35-17, Ohio State committed drive-extending penalties that were transformed into Purdue touchdowns.

â€œWeâ€™re off the field on third down like we were three times on Saturday and you make a penalty, thatâ€™s a turnover if you really think about it,â€ Schiano said. â€œYouâ€™re off the field, weâ€™re getting the ball back. â€˜Oh no youâ€™re not.â€™

“So if you watch the video, third-down play, weâ€™re off and now we start 15 yards ahead [further downfield for the Boilermakers offense] and we never got the ball back. To me, thatâ€™s a turnover. Those mistakes are really critical.â€ 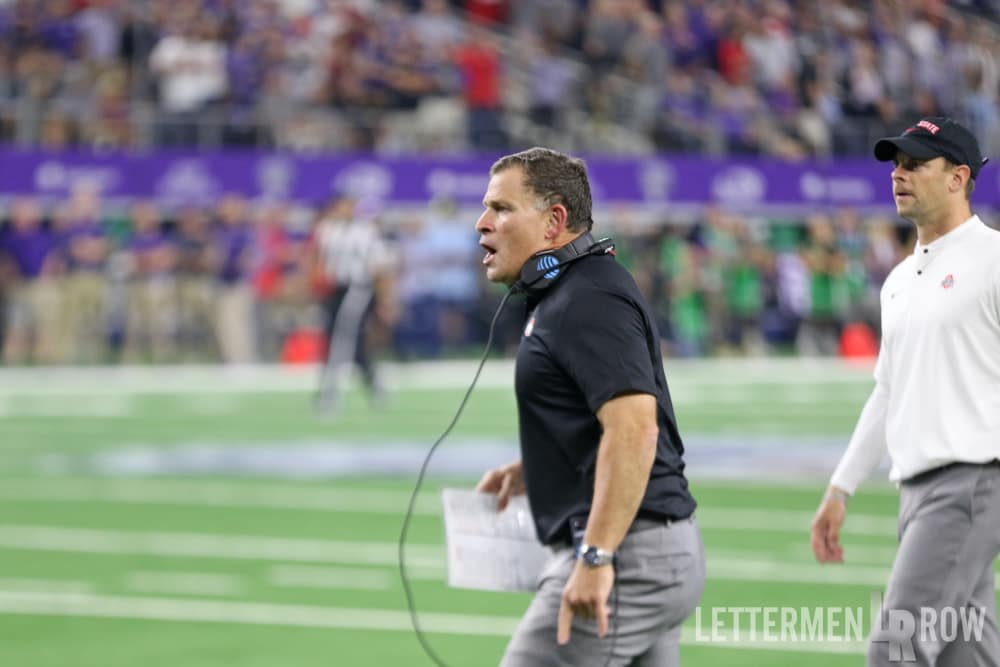 The flags are not an isolated phenomenon in this season. The game against Purdue marked the fifth time in eight games that Ohio State elicited at least nine penalties.

Meyer and his coaching staff never want their players throttling back. Thatâ€™s anathema to every foundational tenet in the program and something Schiano quickly dismissed midweek. Moreover, the Ohio State roster theyâ€™ve assembled usually is bigger, better and deeper than the opposition — at least until the postseason.

But injuries on both sides of the ball, especially with Nick Bosaâ€™s recent decision to focus entirely on his NFL future, are casting players into larger or almost unexpected roles. The experience and talent to overcome avoidable mistakes hardly resembles what it did in the seasonâ€™s opening month.

In the Buckeyesâ€™ most recent national championship season, their 14-1 2014 campaign, they ranked just 92nd nationally, per NCAA stats, in the FBS for penalties. But that ranking hardly matches the reality: Ohio State was penalized less than six times per game and barely 47 yards an outing — almost half their weekly average this season.

This group is on pace, if it produces another 13-, 14- or 15-game season, to shatter the programâ€™s single-season record for penalties under Meyer, which was set a year ago with 97 flags for 943 yards.

Meyer this week lamented the â€œdamn big playsâ€ to which his at-times-overpowering defense has succumbed.

But he might as well have been referring to all that dirty laundry just the same.