Believe it or not, Buckeyes head into off date with more room to grow

The speculation, debate and conversations about Ohio State never end, and Lettermen Row is always ready to dive into the discussions. All week long, senior writer Austin Ward will field topics about the Buckeyes submitted by readers and break down anything that’s on the minds of the Best Damn Fans in the Land. Have a question that needs to be tackled, like the one today about the Ohio State and theÂ potential for the two-time Big Ten champions? Send it in right here — and check back daily for the answers.

Ohio State can still get better, but it’s probably not because there are a bunch of secrets stored up in the playbook.

There are certainly a few more wrinkles left in reserve for Ryan Day on both sides of the ball, it’s true. But the Buckeyes have already started unveiling a couple new packages on defense, unleashing different concepts on offense — and perhaps most intriguing, adding to the playing time for some guys on the rise.

Once Ohio State got into Big Ten play with the road trip to Nebraska and then what was undoubtedly a physical affair with Michigan State on Saturday in the Horseshoe, there was no longer any incentive to hold anything back. Especially when it came time to battle with the Spartans, Day couldn’t coach that even remotely thinking about leaving any part of the arsenal unused. That doesn’t mean there aren’t more options for the Buckeyes still unseen, because they can still do more and certainly will when the stakes are at their highest against Wisconsin, Penn State, Michigan and whatever might come after that.

The real key to the equation, though, is for Ohio State to understand exactly what it needs to win each week. And the reason there are still tweaks that can be made is because the Buckeyes have the personnel to do just about anything it can think of depending on the opponent and the game plan. 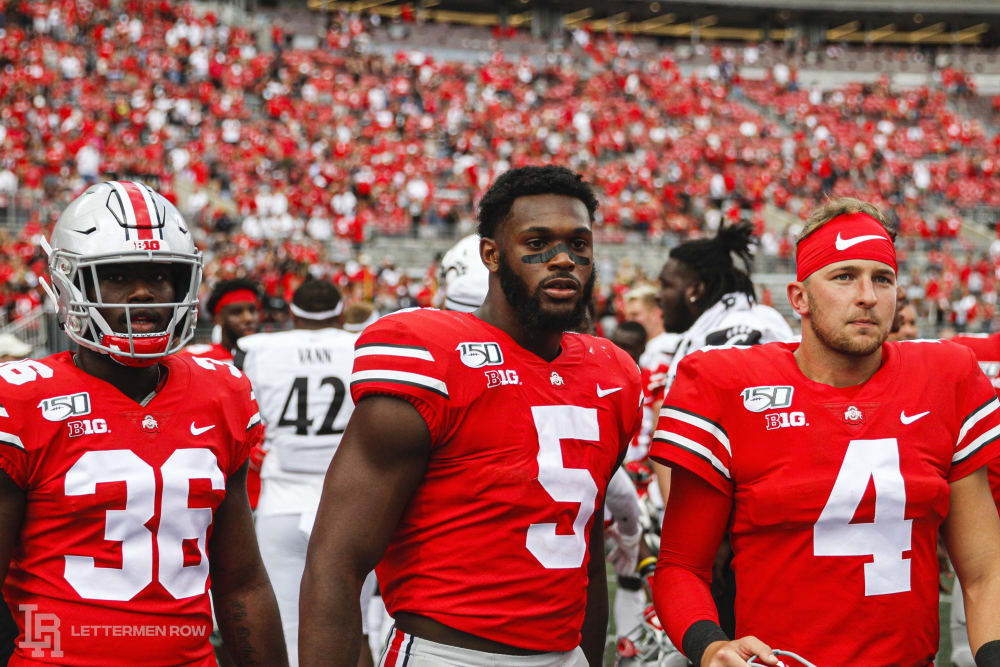 Ohio State linebacker Baron Browning is gaining momentum with every game for the Buckeyes. (Birm/Lettermen Row)

On defense, for example, Ohio State has shown the ability to morph into everything from a loaded-box, 4-linebacker scheme to one that can deploy five or six defensive backs — or a package with Josh Proctor on the field alongside Jordan Fuller at safety like it used last weekend against Michigan State. The Buckeyes can tweak the rotation at linebacker when they are anticipating heavy-run attacks, often electing to go with Tuf Borland in those situations. Or if they expect that position might have to defend the pass or blitz more often, Baron Browning can get the nod.

Offensively, it’s the same deal with using Justin Fields and the threat of the quarterback rush or electing to let him pass more. The Buckeyes can then target the tight ends more than they have so far, or a talented group of wide receivers still could get more involved than they really have been during the first half of the season. There is a seemingly endless list of options for Day when it comes to the play-calling there, but that all boils down to whether or not the revamped offensive line and a first-year starter at quarterback are comfortable doing the basics. Plus, with the way the ground game has been rolling, there’s really not been a need to overthink the approach.

On both sides of the ball, Ohio State appears to be fully at ease with the system and playing fast, free and with confidence. And thanks to the ridiculous amount of talent on hand, most teams are going to struggle to keep up with the Buckeyes as long as they are executing. That’s one area coming out of the Michigan State game where there are signs the offense can be even more dangerous, because there was at least one drop, one high throw and one interception that easily could have turned that easy win into a massive blowout.

That improvement is only going to come with more reps and experience, and that doesn’t just apply to Fields. Wide receiver Garrett Wilson is pushing his way into the lineup more often, Proctor is proving he can help expand the depth and flexibility at safety and guys like Master Teague, Zach Harrison and Jeremy Ruckert are all building on their opportunities to get playing time as the season progresses.

The Buckeyes aren’t showing any signs of slowing down. And that has to be a scary thought around the Big Ten, because they’re already plenty dangerous.