The speculation, debate and conversations about Ohio State never end, and Lettermen Row is always ready to dive into the discussions. All week long, senior writer Austin Ward will field topics about the Buckeyes submitted by readers and break down anything that’s on the minds of the Best Damn Fans in the Land. Have a question that needs to be tackled, like the one today about short-yardage success for Ohio State? Send it in right here — and check back daily for the answers.

And how are they going to run the ball they had trouble last year with that Especially on the short yardage.

The fact that there is room to grow on offense at Ohio State should be a terrifying thought to opponents. The Buckeyes are already far and away the most explosive attack in the Big Ten, they have an embarrassment of riches at the skill positions returning and Ryan Day has already proven himself to be one of the most innovative minds in the game. So, it’s important to keep in mind that almost any team in the country would trade places with the Buckeyes and accept that there were a couple minor flaws in an otherwise dominant attack.

When it comes to the nitpicking, though, the short-yardage and red-zone troubles that popped up occasionally last season are the logical place to start. They’re also a problem that should be relatively easy to fix for the Buckeyes — much more so than when they realized the passing game was in disarray a few years ago and brought in Day to help solve that issue. There are some ready-made solutions already apparent even after just four practices in spring ball, and plenty of reason for optimism as Ohio State keeps striving for perfection and an unstoppable juggernaut on offense.

Before getting to that, there is one caveat. Obviously the offensive line is going to have to play a significant role in the process, and there is a lot of work ahead for that unit even if it looks to have the potential to get back to the program’s high standard. With Thayer Munford sidelined for the spring due to injury, the Buckeyes are essentially working without any full-time starters on the field right now. That’s certainly a positive for getting some young guys reps, but it’s also a reminder that there will be a lot of pressure on relatively inexperienced blockers to produce in the fall.

Now, why is there reason to expect results from Ohio State in short-yardage situations? 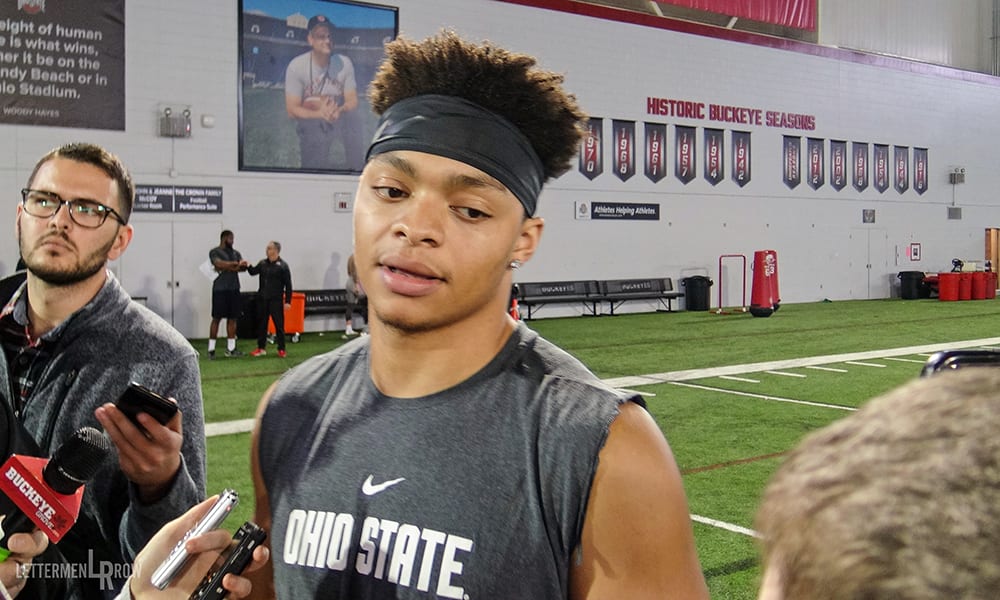 Ohio State quarterback Justin Fields is a threat to run for the Buckeyes. (Birm/Lettermen Row)

Ohio State is working with an under-center package

There was plenty of clamoring last season for the Buckeyes to simply put a big, physical quarterback like Dwayne Haskins under center and let him push the pile to sneak for a first down. That doesn’t sound that complicated, but Urban Meyer had his reasons for not doing it — and they made sense. But Day is already getting his quarterbacks some reps under center, which not only puts the straight-ahead approach in play, it also might allow the running backs to get downhill and build some momentum at the line of scrimmage. How often will the Buckeyes actually skip the shotgun snaps this season?That remains to be seen, but they are at least making sure they have other options.

Justin Fields can use his legs

Ohio State almost certainly doesn’t want to go back to the days of Quarterback Power and piling up carries the way J.T. Barrett or Braxton Miller did. Dwayne Haskins was capable of picking up the tough yards on the ground when needed, most notably last year against Maryland. But he much preferred to throw, and that took away one element of the playbook that had been wildly successful in tight situations for the Buckeyes. Matthew Baldwin is a legitimate competitor in the quarterback battle this spring, and he can’t be ruled out as an option for Ohio State. But Justin Fields is taking the first-team reps at this point and arrived as the most decorated recruit in school history — thanks in part to his dual-threat ability. If Fields does wind up being the starter, he can bring back some of the threat on the ground from the quarterback position and potentially boost that critical success rate in short-yardage scenarios.

Ohio State has a bruiser in the backfield

The Buckeyes have seen J.K. Dobbins fight for the extra yards plenty of times already in his career, and he is certainly capable of converting between the tackles. But if Ohio State wants to carve out a role for a designated short-yardage tailback, Master Teague has the powerful frame to make that job his and help take some of the pressure off Dobbins this season. In limited opportunities last season, Teague showed the awareness, physicality and drive to get those hard first downs against loaded defensive boxes. And he represents one more reason that Ohio State should feel pretty good about its chances of improving yet again on offense.