The speculation, debate and conversations about Ohio State never end, and Lettermen Row is always ready to dive into the discussions. All week long, senior writer Austin Ward will field topics on Ryan Day and the Buckeyes submitted by readers and break down anything that’s on the minds of the Best Damn Fans in the Land. Have a question that needs to be tackled, like the one today about the offensive line? Send it in right here — and check back daily for the answers.

How bad is the depth on offensive line?

Ohio State isn’t comfortable with the depth on the offensive line, that’s no secret since it continues to search for additional options on the graduate-transfer market. It also isn’t panicked, because the program is aware that it already has enough pieces on hand to put together a stellar starting group of blockers. So, the Buckeyes sit somewhere in the middle: Call them cautiously optimistic.

If Ryan Day decided to simply stand pat, the Ohio State coach would have a first-string unit with the potential to be one of the best in the Big Ten and a couple versatile guys who could provide something of a safety net for an injury or two. But there would be a real risk of a drop-off beyond that if health issues pop up — or the likely starters don’t develop as projected.

That’s why the Buckeyes are pursuing Rutgers transfer Jonah Jackson to play either guard or center, and it’s also why new names continue to emerge as visitors this spring. Despite checking in at the maximum amount of scholarships on National Signing Day, a couple spots are bound to open through attrition by the end of spring practice, which would clear the deck for Ohio State to bring in veteran help from outside the program. 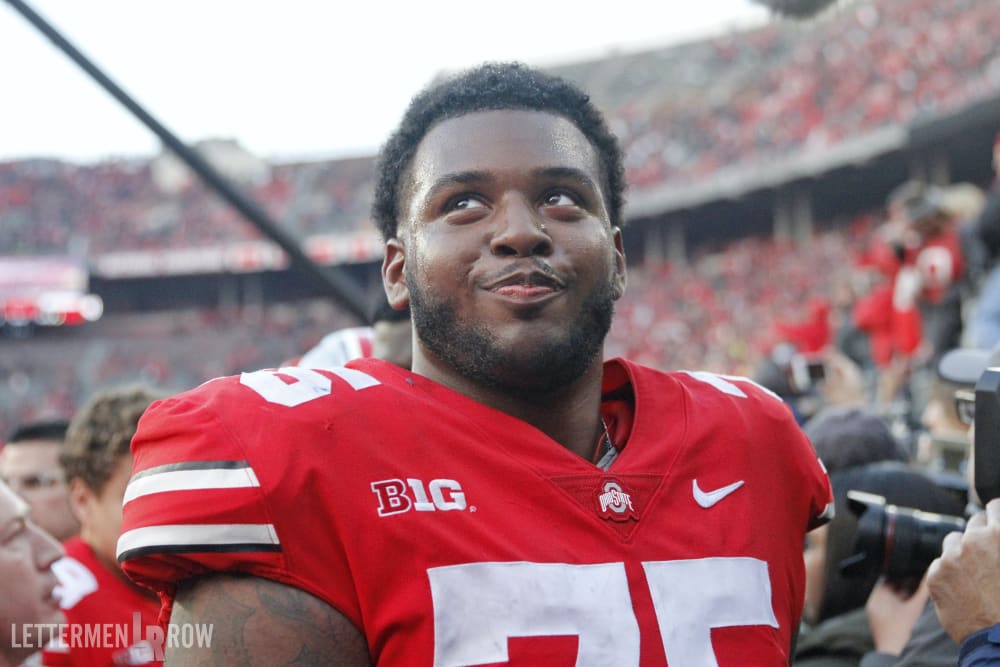 Jackson is the leading candidate for that at the moment, and he could potentially become a starter in training camp given his previous experience in the Big Ten and for an offensive line that was probably the brightest spot for another otherwise disappointing Rutgers squad. But if Jackson doesn’t join the Buckeyes, position coach Greg Studrawa still has enough talent on hand to put together a solid group heading into a key year in his career.

With an offseason to get healthy again, Thayer Munford can be safety slotted back into his spot at left tackle. After emerging down the stretch and making starts in both postseason games, Wyatt Davis isn’t going anywhere at guard. And no matter what happened with Michael Jordan’s NFL decision, Ohio State was expecting Josh Myers to enter spring practice as the top option at center. From there it will get interesting for the Buckeyes, of course, as they head into camp with a position battle at right tackle between Joshua Alabi, Nicholas Petit-Frere and Branden Bowen. How that shakes out could have an impact on the other open spot, particularly since Bowen has already proven in his career that he can be plugged in at guard and thrive.

From that mix of guys, Ohio State can build a formidable offensive line — but there’s not a lot of room for error, and ideally it doesn’t want to dip into the freshman class to play right way. There is plenty of upside with Ryan Jacoby, Harry Miller and Enokk Vimahi on the interior, but that would be asking a lot of them to get ready so early in their careers.Â That’s exactly why the Buckeyes are trying to fill the gap right now with a graduate transfer like Jackson.

If Ohio State can land another Big Ten-ready linemen, the program will start breathing a little easier. And then it can shed the cautiousness and just fully embrace the confidence with a unit that could become one of the league’s best.