COLUMBUS — Usually a major college football team knows it has something special with its offensive line about this time of the year if it has five fellows who feel theyâ€™re as tight as a glove.

But to hear head coach Ryan Day tell it, and even right tackle Branden Bowen second the notion, Ohio State is headed toward its season opener Saturday with nine or more players capable of stepping in up front against Florida Atlantic. It is difficult to remember the last time the Buckeyes felt that way about their credible depth on the line.

â€œWeâ€™ll have our starting guys go out there, and Iâ€™ve said from the beginning, the guys who deserve to play in the game are going to have an opportunity to play,â€ Day said.

Though the first depth chart of the season wonâ€™t be released until Friday, itâ€™s believed the first-team line will include the only returning full-time starter from last year, Thayer Munford, at left tackle. But even his situation speaks to the depth, because when he couldnâ€™t play in the Rose Bowl, Joshua Alabi subbed capably. And Alabi has gotten much of the work in preseason since Munford was restricted as he continued to rebound from the unspecified injury. 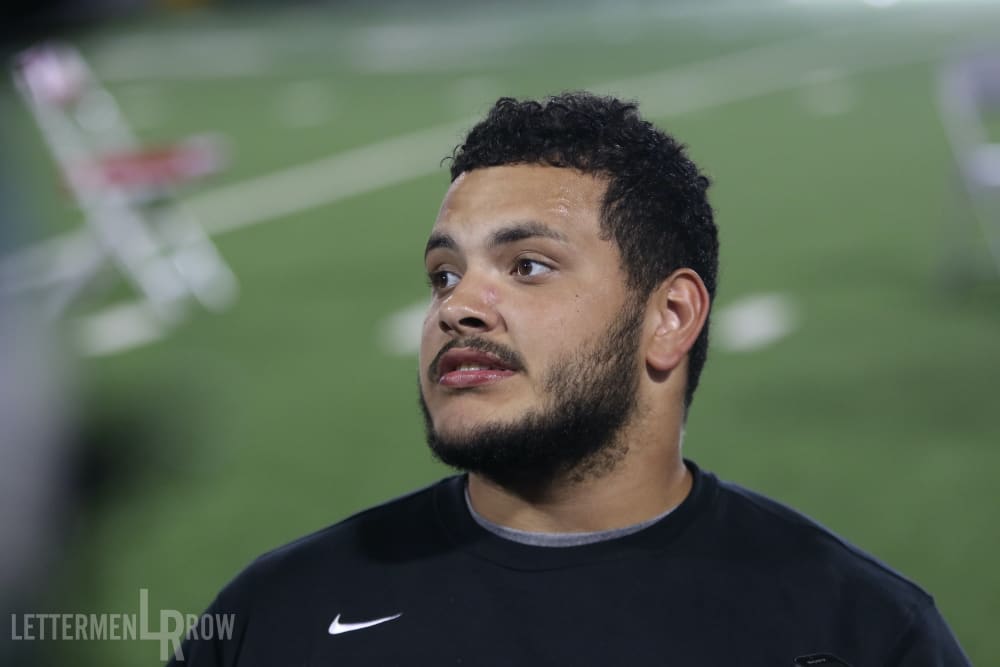 Ohio State guard Jonah Jackson is expected to start on the left side for the Buckeyes. (Birm/Lettermen Row)

At left guard likely will be Jonah Jackson, who transferred in from Rutgers after starting there at guard or center the past several years. Josh Myers appears to have held sway at center despite the charge of prized freshman Harry Miller this preseason. Wyatt Davis has claimed right guard, but both he and Jackson will be backed up by journeyman Gavin Cupp, who has been on a rise since late last season.

And thereâ€™s Bowen. A starter at guard as the 2017 season began, he is coming off a couple of leg injuries that kept him benched most of the past two years. Yet he learned just this week he will get the start at right tackle over sophomore Nicholas Petit-Frere after winning a pitched preseason competition thatâ€™s likely not over.

â€œThereâ€™s some depth there,â€ Day said of the tackle spots in particular, the line in general. â€œItâ€™s hard to find that many linemen who we think have the ability to start and play in the Big Ten. We do. Weâ€™re lucky enough to have that.

â€œI think Josh Alabi and Nick have both proven through practice that they deserve reps, so theyâ€™re going to [roll into the lineup]. Thereâ€™s a chemistry that comes with that. But the calls are the calls. They know each other. Theyâ€™re in meetings every day. Theyâ€™re around each other every day. They communicate.â€

He expects the chemistry to work, regardless the ingredients.

â€œSo whether a guy jumps in or not â€” Jonah Jackson is going to be able to communicate with Josh just like he does Thayer, and vice versa on the right side,â€ Day said. â€œHarry Miller, donâ€™t be surprised if you see him in there as well.

“Those guys, I think when you play to a certain level, you deserve to play. Now when, how, all those things, that depends on the game plan, depends on how the game is being played out.â€

That makes for an odd-shaped glove, but Bowen said it has been one that fits the makeup of the Ohio State group.

â€œWhat I think is going to make us best as a group is our chemistry,â€ Bowen said. â€œThe o-line room this year has a really different feel that I havenâ€™t been around. Weâ€™re all really good friends. We all hang out. We all get together at, say, Josh Myersâ€™ house or something like that.

â€œWeâ€™re all really close. We have been close in the past [in previous seasons], but I donâ€™t think we had it to this level.â€

Which is interesting, since at first glance Jackson had the capability of being an interloper who could sour some of that years-earned chemistry, transferring in as he did for his final in the hopes of playing for a contender.

â€œIâ€™m absolutely surprised,â€ Bowen said of the way Jackson fit in immediately for Ohio State. â€œComing in, I donâ€™t think I could have realized how much or how well he would have gelled into the group as he does now.

â€œItâ€™s really for him to gel into the group because of his maturity, his leadership level. Obviously he was a captain at Rutgers, everything like that. So having someone like that on the o-line is very beneficial.â€

In fact, Bowen said, Jackson has helped bring the younger players along, as have Bowen and Myers.

â€œItâ€™s really bringing along those guys and getting them up to our level of play,â€ Bowen said, â€œso they can go in the game and not just be â€¦â€

Out of their element, ready to fit right into the glove.