The speculation, debate and conversations about Ohio State never end, and Lettermen Row is always ready to dive into the discussions. All week long, senior writer Austin Ward will field topics about the Buckeyes submitted by readers and break down anything that’s on the minds of the Best Damn Fans in the Land. Have a question that needs to be tackled, like the one today about Ohio State and the starting lineup on the offensive line as part of Position Week? Send it in right here — and check back daily for the answers.

1. What do project the starting 5 will be for the opening game? 2. Do you think Dawand Jones will get any meaningful snaps this year?

Ohio State simply wants the best five guys on the field, and it’s safe to assume the offensive line is already 80 percent of the way there.

Finding that last guy isn’t going to be easy. But it’s certainly not for a lack of options — and it definitely eases some of the pressure for the Buckeyes knowing there might not be a wrong answer.

Position coach Greg Studrawa is eventually going to have to make a tough decision, though. Because no matter how much Ohio State might want to rotate all of the talented options vying for the last spot, the importance of chemistry and consistency for that unit almost always trumps any desire to spread around snaps. And that will make what is shaping up as at least a four-man battle royale one of the most fascinating subplots of training camp for Ohio State, particularly since protecting a new quarterback will be critical for the reigning Big Ten champs.

(The assumption here is that a healthy Harry Miller will solidify his role with the first unit and take over the center role that has long been projected for the former five-star recruit.Â Nothing is ever guaranteed at Ohio State, and there are aÂ coupleÂ viable candidates behind the junior pushing for the job. But for the sake of this conversation, the projection is Miller at center, Thayer Munford and Nicholas Petit-Frere at tackle and Paris Johnson at right guard.) 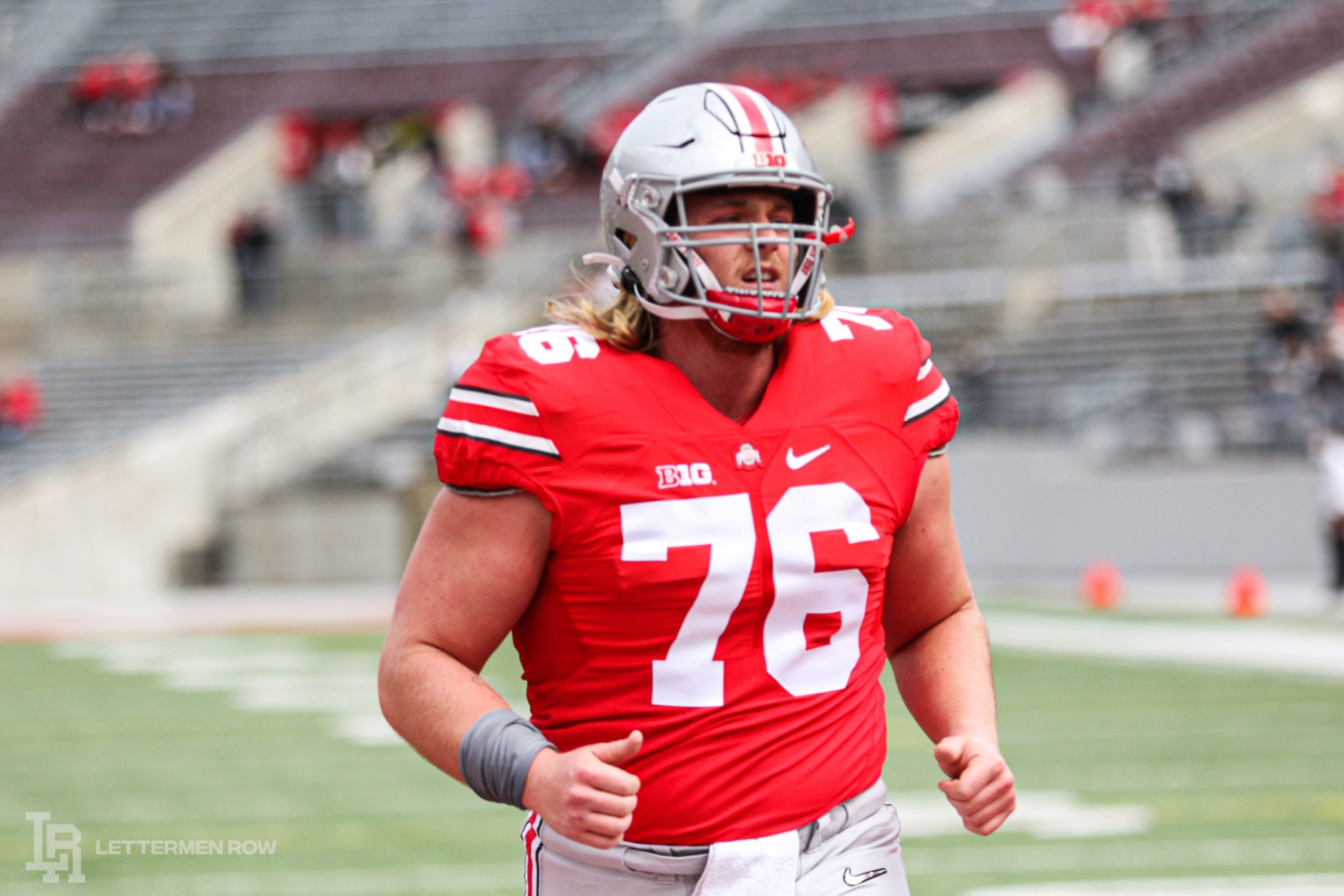 Ohio State junior Harry Miller can be an anchor for the offensive line. (Birm/Lettermen Row)

“Absolutely, thereâ€™s no question â€” I would assume [Miller] is going to be one of the best five,” offensive line coach Greg Studrawa said in the spring. “These young guys are getting the reps and getting the work. But when the preseason comes, Harry is going right back into that mix — whether that be at center or at guard. Weâ€™re working on the best five, and I would assume he will be one of them. But weâ€™ll see.”

The first decision will be whether Miller is ready to anchor the unit in the middle, because that would obviously change the dynamic at guard if the returning starter is suddenly an option to stay put. Luke Wypler put together an impressive spring and has all the tools needed at the position to give Ohio State something to think about, but Miller is a heavy odds-on favorite for a reason.

That likely leaves Wypler in the pool with Matthew Jones, surging Josh Fryar and potentially true freshman Donovan Jackson as the five-star recruit tries to make up ground in a hurry. From that bunch, it’s relatively safe to assume that experience will be a trump card — but Jackson is a wild card given his undeniable potential. He didn’t have the benefit of enrolling early and it’s exceedingly rare for even the most touted offensive-line prospects to show up physically and mentally ready for the position, which probably means a development year is looming for Jackson.

The fact that Ohio State still has three high-level options to choose from ahead of one of the nation’s most decorated recruits is another reminder of the remarkable depth and versatility it has built up front. No matter who ultimately emerges at guard, the Buckeyes will still have the kind of ceiling that would give them the nation’s best offensive line.

Jones has been in the program the longest, boasts the most experience and showed in a couple spot starts last season that he could grade as a champion. If the race was being handicapped heading into August, Jones would probably have the best odds thanks in large part to the way he performed when Ohio State needed him the most a year ago.

But the strong spring from Fryar and Wypler make them both intriguing options heading into training camp. Fryar probably makes more sense as a true guard with a nasty attitude and ample athleticism for the position, and it won’t be a surprise at all if he’s on the field against Minnesota when the season kicks off. Wypler can easily handle that role as well and could set himself up as the next in line for Ohio State’s patented guard-to-center transition plan — though Studrawa might want to let him focus on snapping in August just as a safety net behind a new starter at the position.

That’s just one of the tricky decisions that Ohio State will have to make when it comes to nailing down a lineup with the five-best blockers. But considering the candidates, the Buckeyes are pretty much guaranteed to get it right one way or another.