The speculation, debate and conversations about Ohio State never end, and Lettermen Row is always ready to dive into the discussions. All week long, senior writer Austin Ward will field topics on Urban Meyer and the Buckeyes submitted by readers and break down anything that’s on the minds of the Best Damn Fans in the Land. Have a question that needs to be tackled, like the one today about Michael Jordan and the offensive line? Send it in right here — and check back daily for the answers.

The last couple games certainly haven’t been kind to a unit that was grading out consistently with champion performances across the board, but there’s absolutely no reason for Ohio State to panic up front. The Buckeyes do have some young depth that might be starting to push for playing time, and Joshua Alabi in particular has proven effective coming off the bench at tackle. But when it comes to the apex of the offense, moving Michael Jordan again would only create problems for the Buckeyes, not solve them.

For starters, the guy Jordan beat out for the center job has been injured, and Brady Taylor isn’t expected back until after the off date next week. So, that’s one issue right off the bat, and Ohio State wouldn’t want to throw a first-time starter like Josh Myers into the fire in the thick of a Big Ten race without any previous experience.

The trickle-down effect from there, then, would leave either Malcolm Pridgeon or Demetrius Knox heading to the bench. And both of those guards have posted high marks throughout the season, with Pridgeon joining Jordan as the two Buckeyes who earned champion status in last week’s win over Minnesota. Branden Bowen is reportedly making progress as he continues to rehab from complications stemming from last year’s fractured leg and has a chance to return, but it seems like a stretch to think he’d be able to make much of an impact at this point in the season. 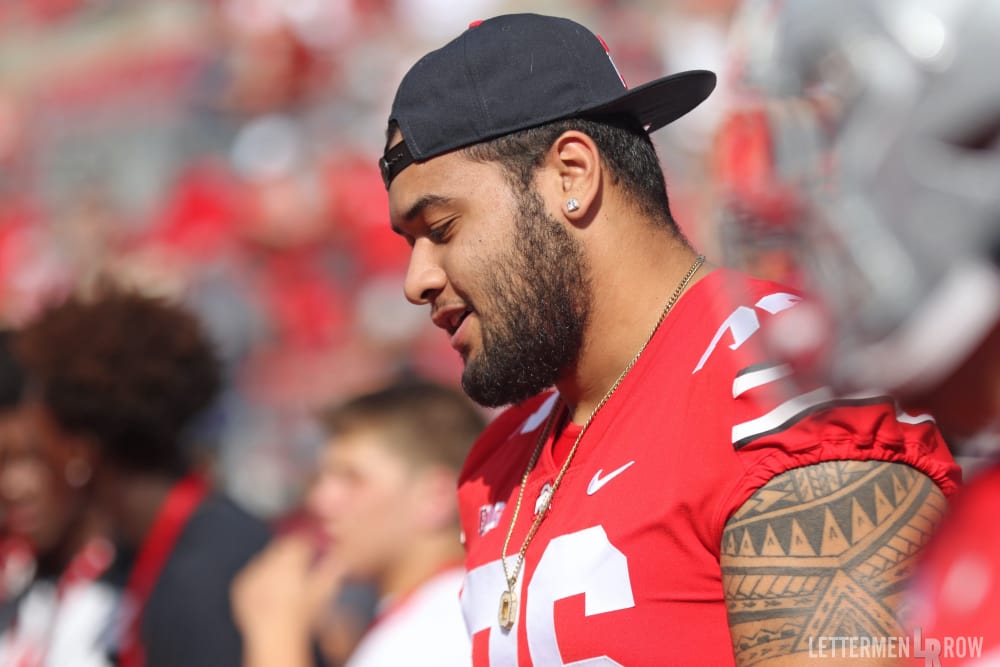 Ohio State guard Branden Bowen has a chance to return for the Buckeyes this season. (Birm/Lettermen Row)

And then there’s this to consider: Ohio State’s offense is absolutely not broken by any stretch of the imagination, and tinkering with the lineup seems unnecessary. Yes, the Buckeyes could improve in short-yardage situations. No, Urban Meyer wasn’t happy with the three sacks allowed last week. But Ohio State is second in the country in yardage and averaging more than 46 points per game, and that’s just not possible without the big guys up front doing something right — even if they’ve hit something of a recent rough patch.

It’s also worth noting that the influx of run-pass options in the playbook this week can skew the numbers. Would the perception of the offense change if Dwayne Haskins had been given different looks on the 10 or 12 plays last week that forced him to throw instead of hand off the football? It shouldn’t, because making the correct decisions behind those blocks allowed the Buckeyes to rack up another 500-yard outing.

Urban Meyer is always going to consider every option to make sure Ohio State is growing, developing and on pace to compete for championships. But right now, shaking up the offensive line is only likely to create a problem where there really isn’t one.