The speculation, debate and conversations about Ohio State never end, and Lettermen Row is always ready to dive into the discussions. All week long, senior writer Austin Ward will field topics about the Buckeyes submitted by readers and break down anything that’s on the minds of the Best Damn Fans in the Land. Have a question that needs to be tackled, like the one today about the Ohio State and theÂ score prediction for the Big Ten East Division title game against Penn State? Send it in right here — and check back daily for the answers.

Ohio State is a double-digit favorite across the board against Penn State. (VegasInsider/Courtesy)

COLUMBUS — The next time Ryan Day sees that fiery look in the eye of his star tailback, he probably won’t have to douse the flames and tell J.K. Dobbins his game is over.

The halftime conversations moving forward shouldn’t revolve around the right time to take quarterback Justin Fields out of the lineup to protect him for the stretch run.

Unless Chase Young needs a breather, the odds of Ohio State making him just another member of the Rushmen rotation are about to drop considerably.

Championship Season has officially arrived for the Buckeyes, and the competition level is about to ramp up starting on Saturday in the Horseshoe with a division title on the line against Penn State. And when the stakes are highest, that’s when the superstars need to take over for No. 2 Ohio State — and they’ve been waiting somewhat patiently for moments like this to finally arrive. 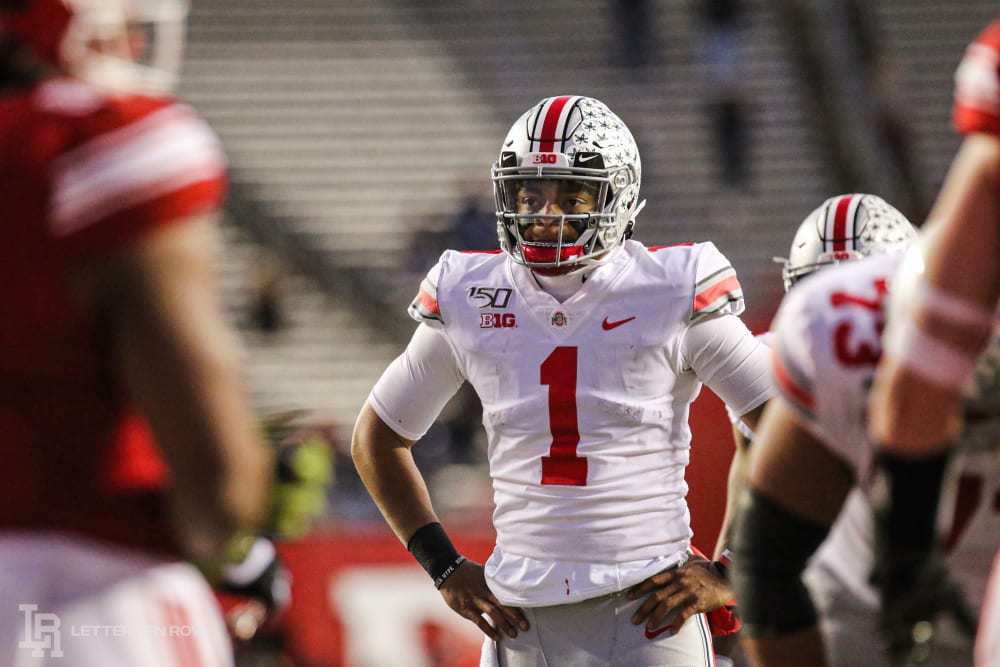 Ohio State quarterback Justin Fields should be ready for a four-quarter battle — if needed. (Birm/Lettermen Row)

“Then we got down to the field, he’s stretching out and moving. Before the ball got kicked I said: You’re out. He looked down on the ground, and I told him I was only doing it because I love him. He said: ‘I love you too, Coach, appreciate it.’ And then he went on and cheered for his teammates. But that’s the competitor to him, and I told him there’s a lot of football to be played.”

Dobbins has had those conversations regularly this season for the Buckeyes, and he’s heading into the final two games of the regular season with only 42 total second-half carries — a number that’s almost impossible to believe considering his skill, importance to the Buckeyes and the fact that he’s still fourth in the nation in rushing yardage.

But the fact that Ohio State has been so dominant without needing to grind down Dobbins, without having to rely on Fields to take every snap this season and even going through a couple games without Young available at all should only bode well down the stretch for the program. The Buckeyes have rarely needed to break a four-quarter sweat while rolling to 10 consecutive blowout victories, which means there might still be another gear left for the superstars when it comes time to prove what they can really do.

Ohio State is again a comfortable, double-digit favorite against Penn State, and the elite talent on the roster is a major reason why. Now it’s up to them to make a difference when titles are actually on the line, and the Buckeyes have done everything they can to make sure the tanks are full for the championship drive.