The speculation, debate and conversations about Ohio State never end, and Lettermen Row is always ready to dive into the discussions. All week long, senior writer Austin Ward will field topics on Ryan Day and the Buckeyes submitted by readers and break down anything that’s on the minds of the Best Damn Fans in the Land. Have a question that needs to be tackled, like the one today about possible position changes? Send it in right here — and check back daily for the answers.

Hypothetically, Who is one defensive player you think would be fun to see on offense and vice versa?

The days of the two-way star are basically long gone, and the evolution of offenses and the number of plays in a game are probably the main culprits right along with the need for specialization. But that doesn’t mean Ohio State wouldn’t have options for players who could line up on both sides of the ball if it wanted to, which is another perk of recruiting the best athletes in the country year after year.

Who could do it on the current roster? Let’s start with somebody who might actually be an option to switch from offense to defense — after already making the opposite move previously in his career.

Rashod Berry was certainly solid at tight end last season, although he wasn’t the breakout star that was projected at least in this space during the preseason. His rare combination of strength, mobility and versatility made him an ideal candidate to help at a position that was short on depth, and his nine catches and a couple touchdowns were a nice benefit for the Buckeyes — who also wound up needing his score in the Rose Bowl to close the season with a victory.

Ohio State obviously envisioned success for Berry in that role when it moved him over from the defensive line, and he’s done nothing but embrace his opportunity since the switch. But could he actually be better off helping the pass rush moving forward? Berry at least dropped a social-media hint that it might be up for consideration, and it would make sense with Jeremy Ruckert poised to take a major step forward into the rotation at tight end alongside the returning unit leader Luke Farrell. While Ohio State isn’t short on depth with the Rushmen either, it’s possible that working into the mix with Chase Young, Jonathon Cooper and Tyreke Smith might be a better opportunity to unleash Berry’s athleticism — or maybe he could even dabble on both sides depending on the situations. 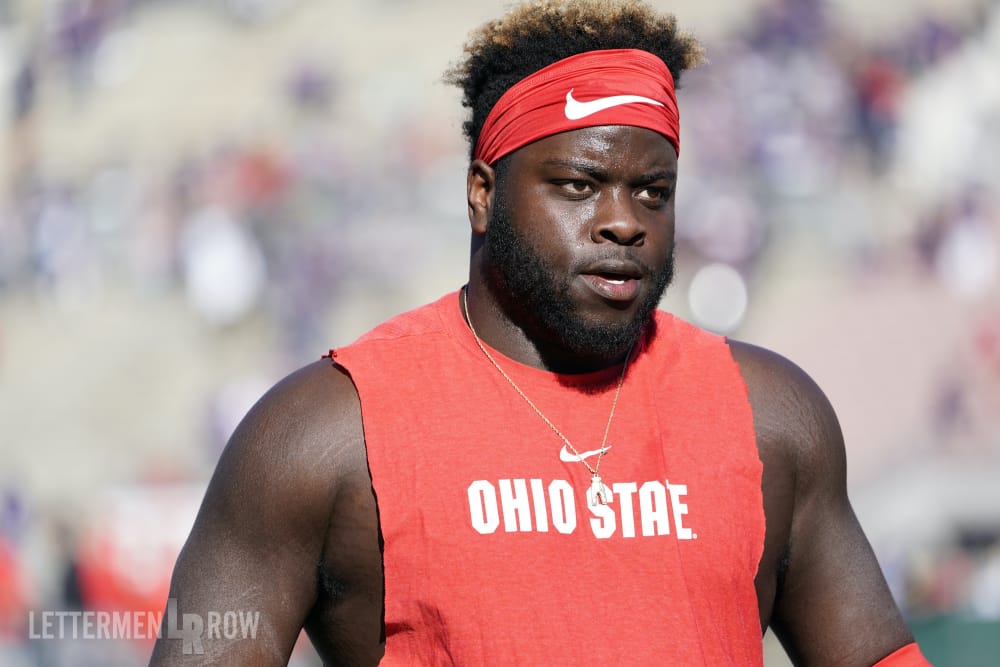 Ohio State also has a couple signees who could fit on either side of the ball, perhaps most notably with running back/linebacker Steele Chambers and do-it-all weapon Craig Young. The Buckeyes don’t have to rush to any decisions with those incoming freshmen, of course, but what they eventually decide will be fascinating to watch once the newcomers really get started with the program. Since they haven’t initially played anywhere yet, they don’t exactly count as options to switch.

So, as for a purely hypothetical option: Who didn’t love watching Robert Landers scoop up that loose ball and rumble to the end zone two years ago at Indiana? The rising senior defensive tackle is a handful at his natural position, of course, and his unique size and quickness helps set him apart and allow him to knife into opposing backfields so consistently. But what if he started a play in the Ohio State backfield? The Buckeyes have looked for creative options in short-yardage situations in the past, so maybe it should hand it to the big fella when he’s clearly tough to bring down, knows how to secure the football — and even flashed a couple subtle moves in the open field.

Plus, any chance to add to the possibility of one of the most entertaining guys on the roster being invited to the postgame press conference is a win for everybody around the program.

Maybe that’s still a little far-fetched compared to the possibility with Rashod Berry. But the Buckeyes are never short on options just in case the two-way craze returns to college football.