MIAMI — All Ohio State wanted was a chance.

The Buckeyes always believed they had the talent to get back to the College Football Playoff and compete for a national championship. But all that ability didn’t make any difference in August when the Big Ten abruptly canceled its season and left the program desperately searching for answers and an opportunity to get back on the field.

Even once that was reinstated, the journey hasn’t been easy for Ohio State. And yet after everything they have been through, the Big Ten champions find themselves one win away from a national title on Monday night against Alabama.

“When you think about that, it just kind of emphasizes the point of just how chaotic this past three, four, five months have been,” Ohio State coach Ryan Day said. “Some days you woke up, you didn’t know which direction you were going in.Â Yeah, certainly there was a time where we didn’t think we’d have a season, when we weren’t sure if we were going to restart a season. I think thatÂ goes to show you how strong our guys have been. Every program has gone through some different version of it.”

“At some point we’re going to sit back and go through all this stuff, but now is not the time.Â All the focus is on playing in this game. But it certainly has been a strange road to get here.”

Win or lose, South Florida is the final stop for the Buckeyes and Crimson Tide and the book will be closed on perhaps the strangest season college football has ever seen. What’s going to happen at Hard Rock Stadium? The Lettermen Row staff is ready to make some Bold Predictions ahead of the titanic title-game clash. 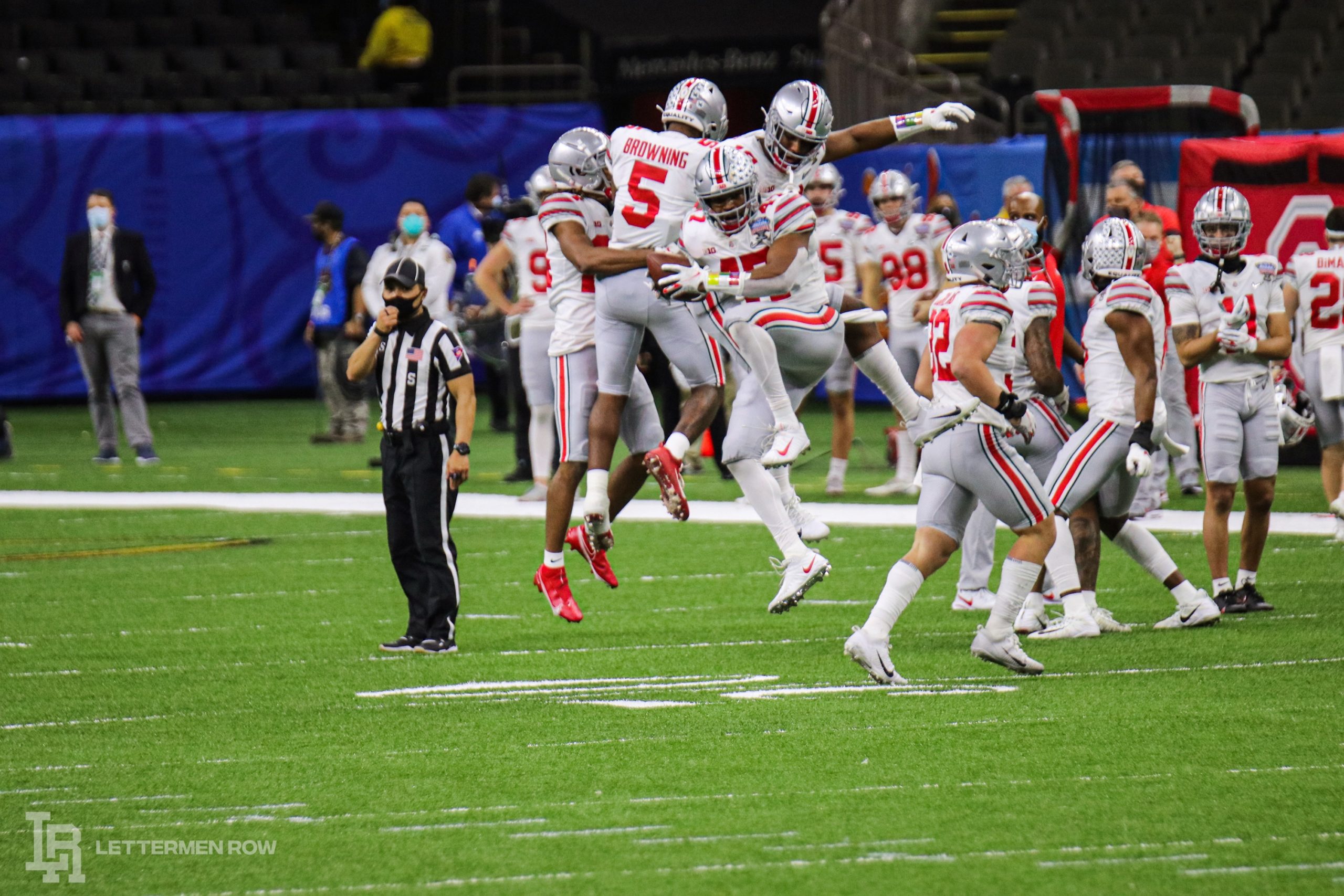 The Ohio State defense made some huge plays in the Sugar Bowl win. (Birm/Lettermen Row)

Austin Ward: Baron Browning will have two sacks for Buckeyes

Ohio State has had to get creative on the defensive line over the last couple games, and that is likely to be the case again as this bizarre season concludes with the title matchup against Alabama. There is a ready-made solution if the Buckeyes need a boost with the pass rush, and Baron Browning has all the physical tools and enough experience coming off the edge to be a major factor in that role. Browning has quick-twitch reflexes, he’s got a rare combination of size and speed and he’s worked with defensive line coach Larry Johnson on his technique off and on over the last two seasons. Thanks to the rise of Justin Hilliard at linebacker, Ohio State has the freedom and flexibility now to move Browning around wherever he’s needed. Expect that to be near the line of scrimmage on Monday night — and for the senior to put on a show.

Birm: Jonathon Cooper will score on defense for Ohio State

Back in January of 2015, a defensive touchdown from senior defensive end Steve Miller changed the direction and momentum of the Ohio State upset win over Alabama in the College Football Playoff semifinal. This time around, itâ€™s going to be Jonathon Cooper who makes the play that turns the Tide for Ohio State. After a career of always being â€œThe Otherâ€ defensive end for the Buckeyes, Monday night will be Cooperâ€™s swan song — and heâ€™ll end it with a huge defensive touchdown against the countryâ€™s best offense.

Ohio State has been running the ball — and stopping the run — better than anyone in the country during the last three games, and that won’t change against the stout Alabama front. The Crimson Tide offensive line won the Joe Moore Award as the nation’s best offensive line unit, but the Ohio State blockers up front will have the better night in the title game. Trey Sermon will put on another rushing clinic and outrush Heisman Trophy finalist Najee Harris to lead the Buckeyes offense to a dominant performance on the ground — and maybe even a national title.

Tim May: Josh Proctor will nab interception for Ohio State

Josh Proctor prides himself as the “Swiss Army knife” of the Ohio State defense: Ready, willing and able to take on a variety of roles in the revamped secondary. He has been just that in the Kerry Coombs-inspired scheme, which occasionally has put him in position for game-changing plays. So it will be in the season finale, the College Football Playoff national title game against Alabama and its scarily efficient, wide-open offense which includes Heisman Trophy-winning receiver Devonta Smith. Proctor, playing anywhere from up near the line to back at a safety spot as a coverage augmenter, will have chances to get the ball in his hands. It says here he will hang on to one or two of them as the Buckeyes hold sway at key moments in what promises to be a serve-and-volley affair.

Will Crall: Pete Werner will force key fumble for Buckeyes

Ohio State senior linebacker Pete Werner has a knack for making big plays in big games. They don’t get any bigger than the national championship, and Werner will make his presence felt by forcing a fumble against Alabama. Heâ€™s already done it twice for Ohio State in two key moments this season against Indiana and Northwestern. Whenever the Buckeyes need a big third-down stop or a key play to swing the momentum, Werner is usually the guy. Werner will rise to the occasion once more against Alabama and will have a huge title game for the Buckeyes.