COLUMBUS — A handful of viewing sessions and an abbreviated spring game only paint so much of the Ohio State quarterback-battle picture.

Yes, it’s enough to understand where C.J. Stroud, Kyle McCord and Jack Miller stand heading into the summer. But with so little to judge, it leads to some hot takes and overreactions. More importantly,Â it doesn’t quite cover the 15 practices worth of film Ryan Day and the Ohio State staff have at their disposal as they begin to sit down and evaluate where the competition stands.

In his spring game press conference, Day admitted the media has only seen so much of the three quarterbacks. But he also emphasized howÂ the Buckeyes will take the entire body of work into consideration when making a decision, not just make judgments from the scrimmage inside the Horseshoe because some players flashed.Â

With the spotlight on the quarterbacks this spring, nearly every Ohio State position coach and player made available in interviews were asked about the competition. Anything to get a nugget of information or update on where things stand. Some chose to give in-depth answers on how it impacted their position, others gave the simple walk-around answer that all three quarterbacks are capable.Â

Lettermen Row has compiled all the quotes in one place to try and give a better picture of the quarterback situation from the eyes of those inside the Ohio State program.

Tony Alford: â€œExtremely talented guys.Â They all have big arms and can throw it and are great kids. I know theyâ€™re not steeped in experience, but what I have seen from them, from outside the room watching them, they are all highly competitive guys. â€¦ They seem really good together, and they help one another out.” 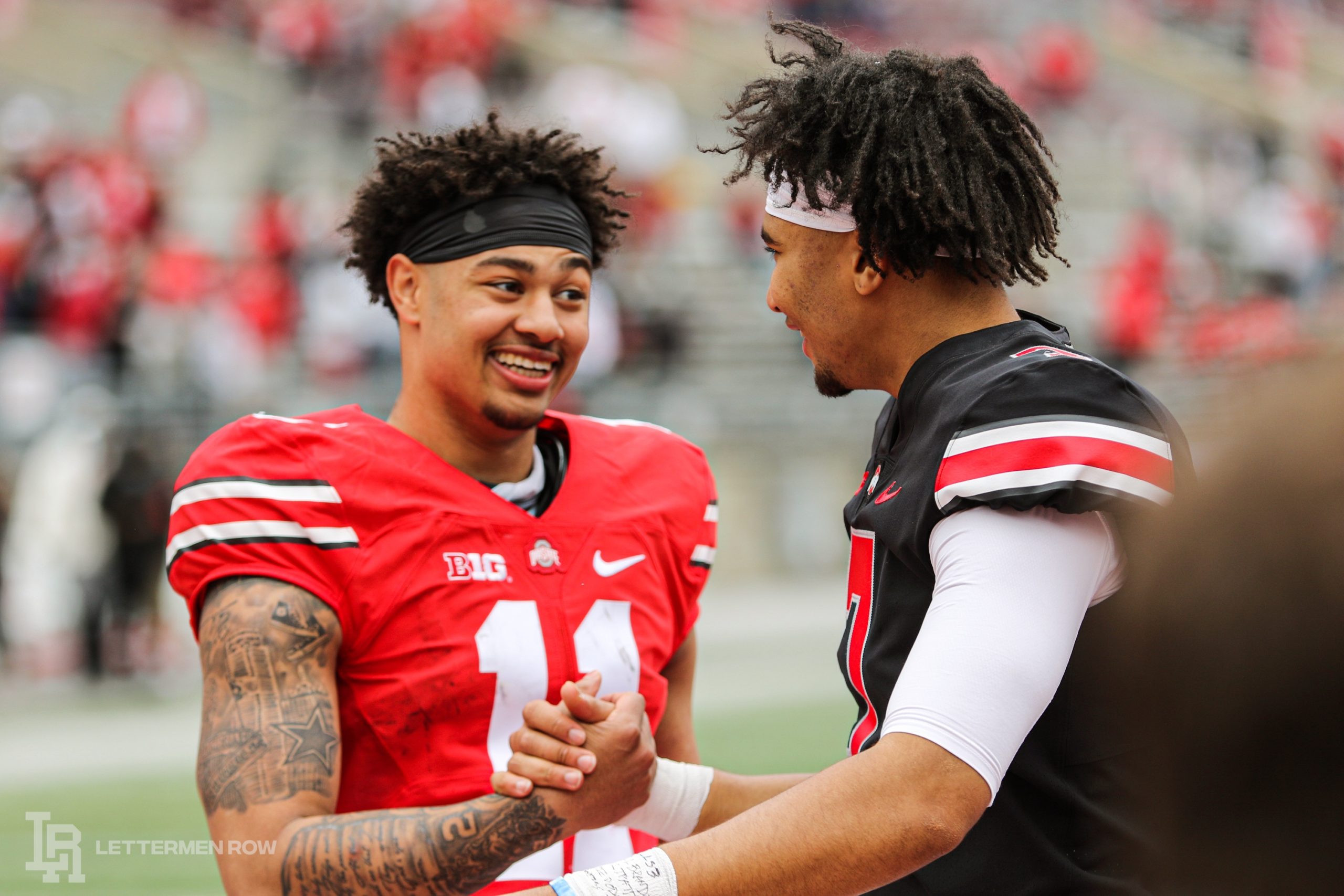 Jaxon Smith-Njigba and C.J. Stroud could connect quite a few times for Ohio State. (Birm/Lettermen Row)

Brian Hartline: “I love it. I love the situation with a young quarterback. It just asks us and demands us to be more detailed than ever. I mean, not that these guys can’t bail us out at times, but to be exact with landmarks, be very clean with body language to not confuse people. Having a younger quarterback that is maybe not learning it all for the first time, but they also don’t have a large body of work.

“I think it’s awesome, I think it provides a lot of clear direction on what’s expected, are we doing it, are we not and then we don’t have the cloudiness all the time of maybe quarterbacks making us right. They obviously do, but anytime quarterbacks make you right, it kind of covers up the real problem, the real inefficiency. … I love the situation right now. Obviously we get through spring we don’t have any young quarterbacks anymore. We’ll carry that tag probably for the spring practice. Once you clear that, man, there’s no rookie mentality anymore. We got to go.”

Chris Olave: “They’re all good in their own way. Kyle’s really good, Jack’s really good, C.J.’s really good. I believe coach Day is going to make the best decision. He’s one of the best coaches in the country, so as receivers we try to make it easier on the quarterbacks. We try to get open for them and communicate with them at all times. Whoever’s the quarterback, we’re gonna feel good about it.”

Garrett Wilson: “Every year, we recruit the top dudes and this has been going on forever. Coach Day is one of the best in his job in the country. So, I’m very confident in everyone on the team, confident whoever slinging the ball back there is going to be ready to go ad be able to take us wherever we’re built to go. I’m very confident in that.”

Greg Studrawa: “I don’t think they [offensive line] have a clue about the quarterback battle. I think they’re so focused on trying to get better.”

Thayer Munford: “To be honest, I’ll block for whoever. It doesn’t matter whose back there at all, we got three amazing quarterbacks.

“To be honest, it wonâ€™t take that long. I believe whoever is going to be behind me or the starting offensive linemen when we play Minnesota of course, everybody knows itâ€™s going to be that guy. As of right now, Iâ€™m just happy where our quarterbacks are at right now.” 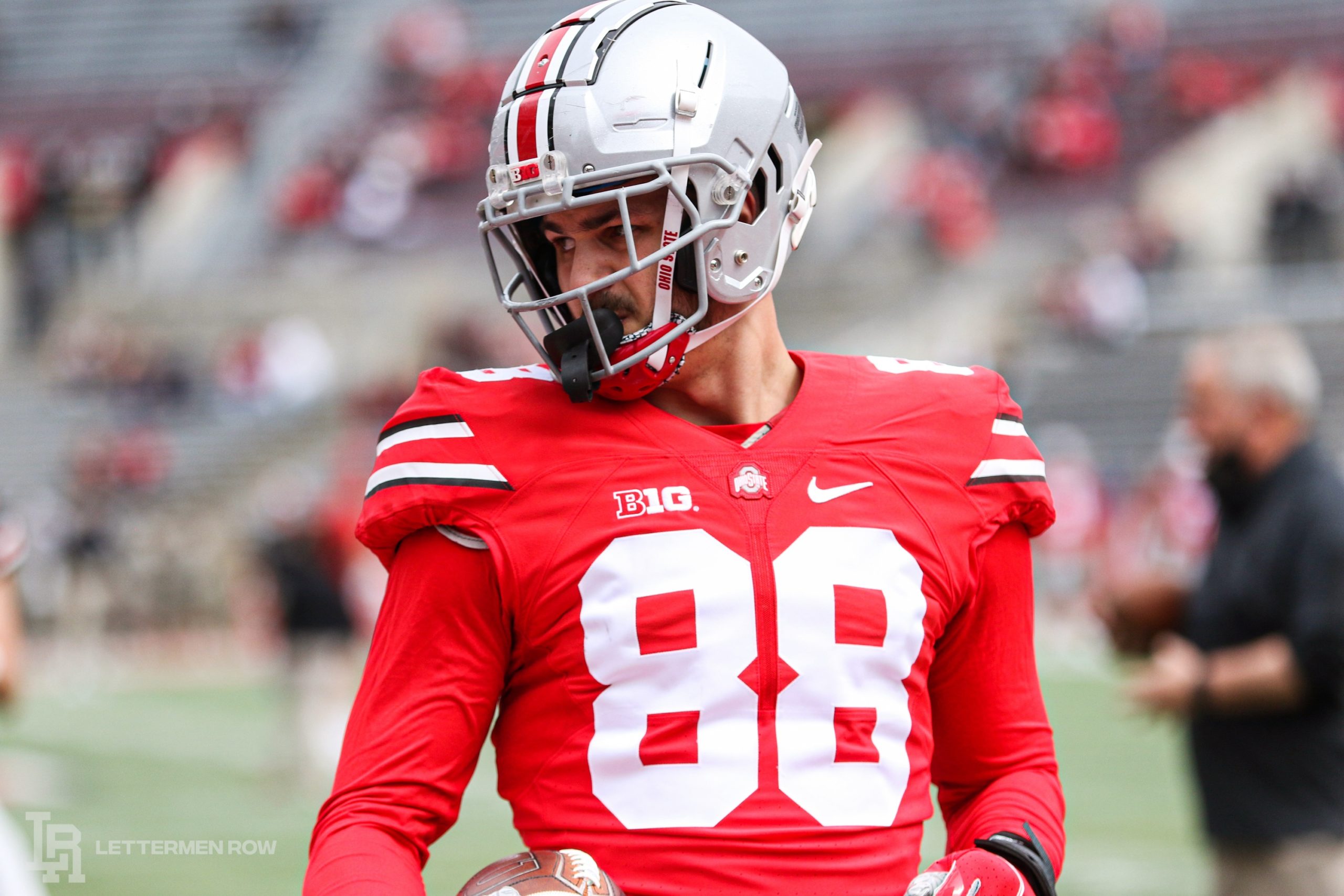 Jeremy Ruckert will be have a larger role in the Ohio State offense this fall. (Birm/Lettermen Row)

Kevin Wilson: “I think we need a lot of time. You go through what we [did] — we had, I thought, a really strong winter session. Even with that couple day pause, we had some great workouts. Leadership development, all that. We’re not allowed to be around them when they’re throwing the ball and stuff like that. So, you know, you got one practice. Fortunately, what’s unusual with those 15 early graduates, we had so many numbers, that sometimes you get a little tight with your numbers and maybe can’t do as many reps. We have enough numbers that’ll help these young guys get reps because you can practice a hair longer and get a few more plays of 7-on-7 and team. Because to me, they just need time.

“I know Coach [Ryan] Day and Coach [Corey] Dennis, we’ll always play to their strengths. I don’t think the offense changes, but you play to what the offensive line can do and what the quarterback can do. I think in time, we got plenty of time this spring and then the summer workouts, to figure that out. They look good through winter, we’ve just had one practice with a few throws to say the strengths.”

Jeremy Ruckert: “Mostly, it’s just putting in the time with the quarterbacks. Getting on the same page as them and really working on timing and the trust aspect of it. … Just telling them that whenever you need us we got you, we’ll be your security blanket. Whatever you want us to do, we’ll do. The biggest thing going into this spring and offseason is being there for them and really showing them that they can trust us.”

Zach Harrison: “To be honest, the quarterback really doesnâ€™t affect me. Once the ballâ€™s snapped and I start my rush, what they worry about is behind me. I donâ€™t really know whose making the best throws and the best reads, I just got to get to them. In terms of the quarterbacks, I believe in all three of them. Whenever, whoever Coach Day says: â€˜Youâ€™re the guy,â€™ I got all the faith in him.”

Dallas Gant: “Yeah, those guys are slinging it. I mean I wouldn’t say one in particular or anything like that, they can all sling the ball. Seeing them, you know, get to see more of them as the spring goes on with pads and how they react to pressure and certain stuff like that because I think we’re in good hands, we’re in really good hands.” 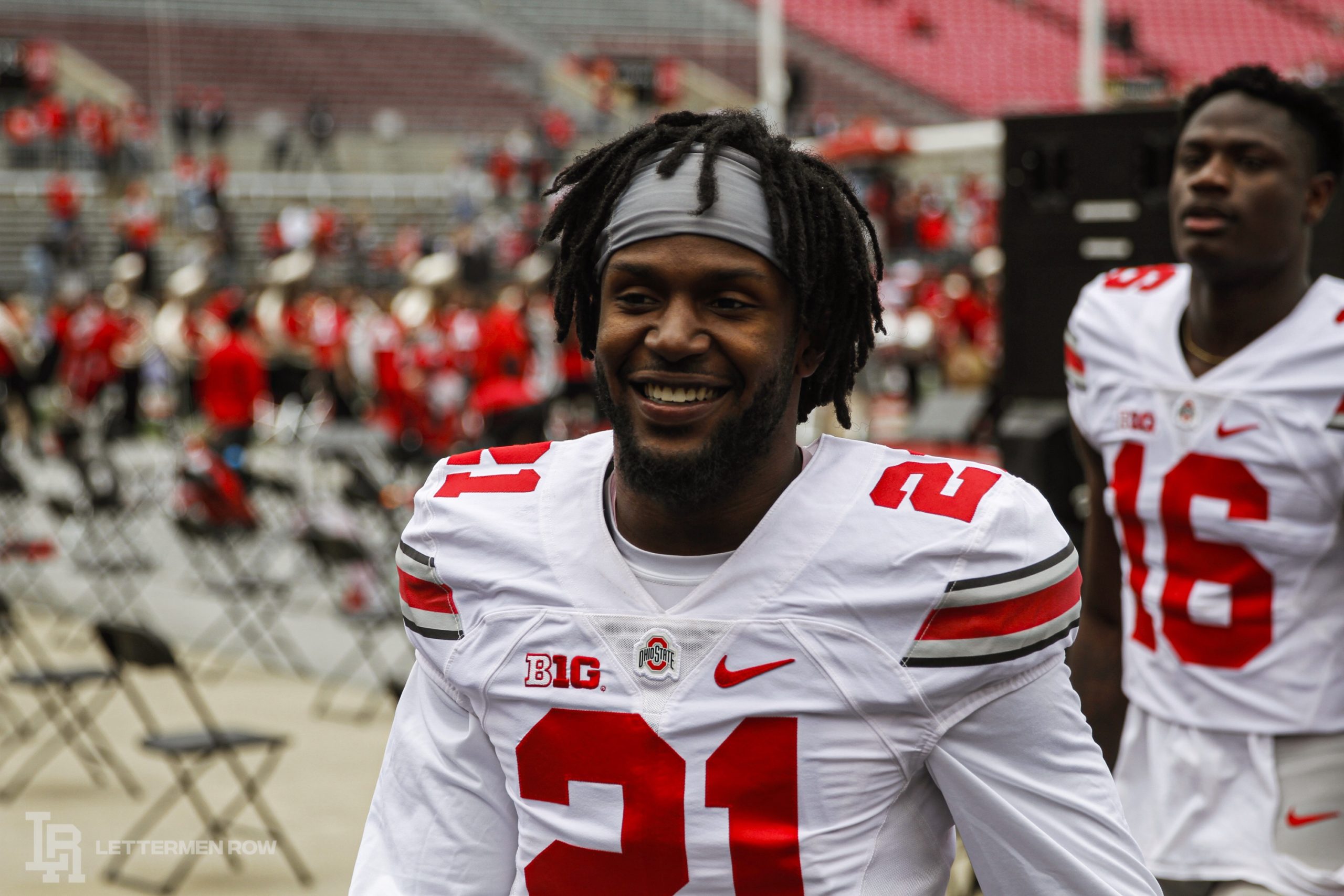 Marcus Williamson: “You look across the board, these coaches are recruiting their ass off, man. So you look over there and the way these quarterbacks sling the ball, just seeing their improvement day-to-day, it’s really exciting. I’m sure I can’t give any specifics, but I’ve been really impressed by the growth of these young guys, especially without them having any game experience. And just taking that step every day, man, just every day working to get better.”