The summer offseason is in full swing, and Lettermen Row is trying to survive it with our annual Position Week breakdowns. By the time all nine units at Ohio State have been covered, training camp and media days will nearly have arrived — and the return of football in the Horseshoe will be just around the corner. Let’s kick it all off with the Buckeyes quarterbacks.

COLUMBUS — Ryan Day is plenty used to dealing with quarterback battles by now.

Last year was supposed to be the smoothest ride of his coaching career, incredibly marking the first time he was going to have a second-year starter to work with at the most important position on the field. Obviously that wound up being even more valuable due to the challenges of the pandemic, setting aside just how ridiculously talented Justin Fields was in the first place.

But now Day is right back to those familiar feeling of starting over — a mix of uncertainty and excitement as the Ohio State weighs its options during a three-man competition to take the torch from arguably the best passer the program has ever seen. C.J. Stroud, Jack Miller and Kyle McCord are all plenty talented in their own right, and that’s exactly why Day wasn’t in a rush during spring practice to end the battle and name his next starter.

“This was just a very small glimpse at a bunch of guys taking some reps,â€ Ohio State coach Ryan Day said after the spring game. â€œThereâ€™s a body of work that needs to be built from that first spring practice all the way through the first game thatâ€™s still yet to be written.

â€œTheyâ€™ve learned a lot, but now the race is on over the next few months to see who can make the next stride so theyâ€™re further along. Spring has been good, but thereâ€™s still a long way to go before Minnesota.â€

The Buckeyes still have two full months to go even before putting the pads back on for training camp, so clearly there is a lot of work to be done. What will be the keys for Day and Ohio State to sort through, and what has already been learned about those three candidates? Lettermen Row is kicking off the week with Five Questions for the quarterbacks. 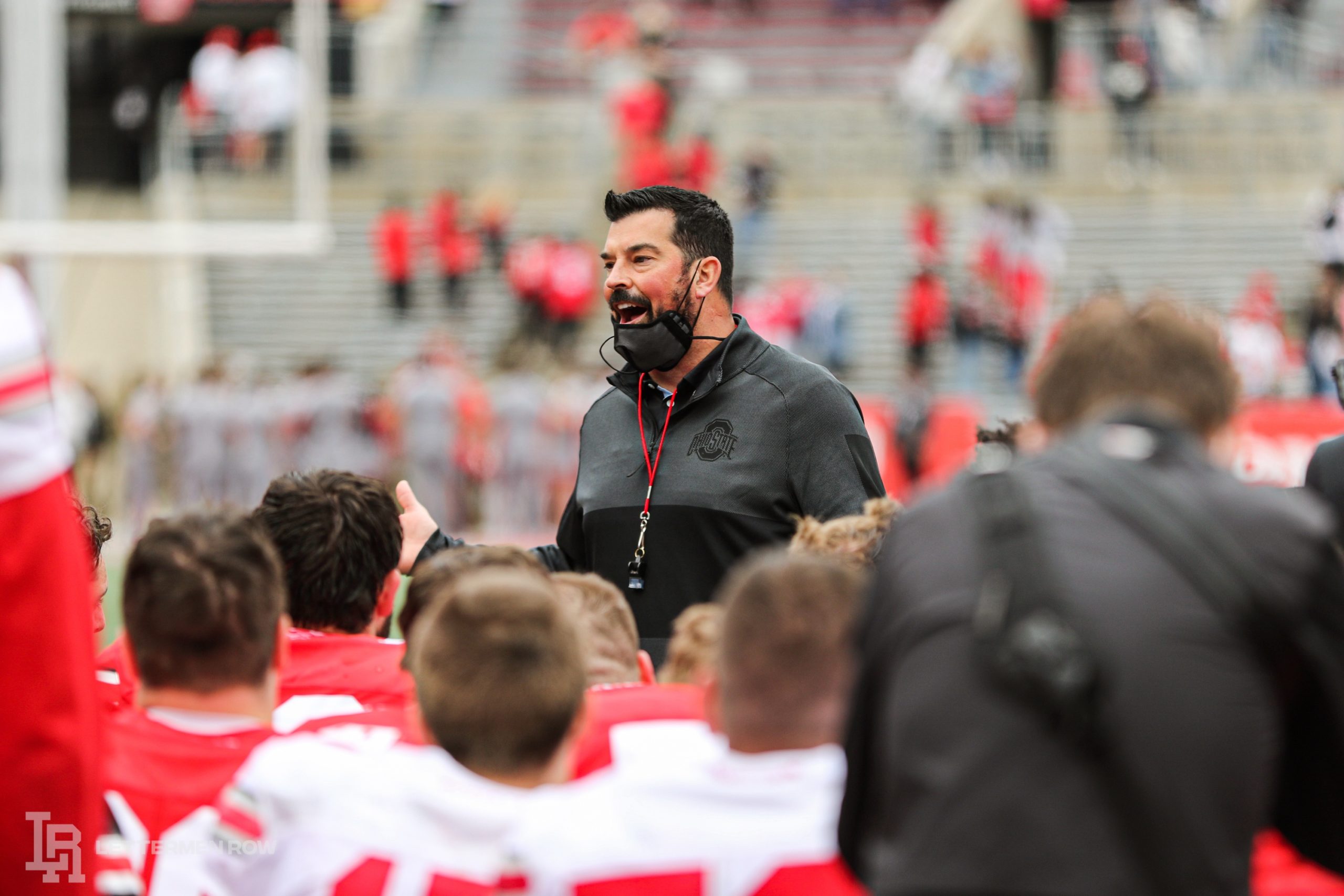 Ryan Day has never rushed a decision at quarterback. If he was patient enough to let the race carry over into August when Justin Fields was involved, clearly he was going to be comfortable doing the same with the talented trio on the roster now. But at some point the Buckeyes are going to have to make a decision, and it’s hard to imagine Day will leave the depth chart unsettled past the midway mark in training camp. Ohio State has to open the season with a Big Ten road game, and it follows that up with a top-10 showdown against Oregon. The sooner the Buckeyes are able to narrow the focus and give one guy the first-team reps, the better off they will be. Ohio State is a legitimate national-title contender considering just how much elite skill litters the lineup elsewhere, and it can’t afford to get bogged down with uncertainty at quarterback.

The Buckeyes have been careful not to publicly reveal a depth chart, and Day is well practiced at deflecting questions about who might be leading the race at quarterback. But it hasn’t been that difficult to see that C.J. Stroud is the odds-on favorite for the job. For one thing, the sophomore was at the front of the line for reps during ever open viewing period in March and April, which obviously isn’t a mere coincidence. Stroud earned the backup job last fall and was the guy the Buckeyes turned to when Justin Fields had to leave the field, and he didn’t do anything to give up that lead during the key workouts earlier this year. The Spring Game must always be taken with a grain of salt, but he was rock-solid throughout that afternoon and delivered a few strikes that even brought back some Fields deja vu. All indications point to Stroud as the guy for the Buckeyes, but he’s not officially done earning that role yet. 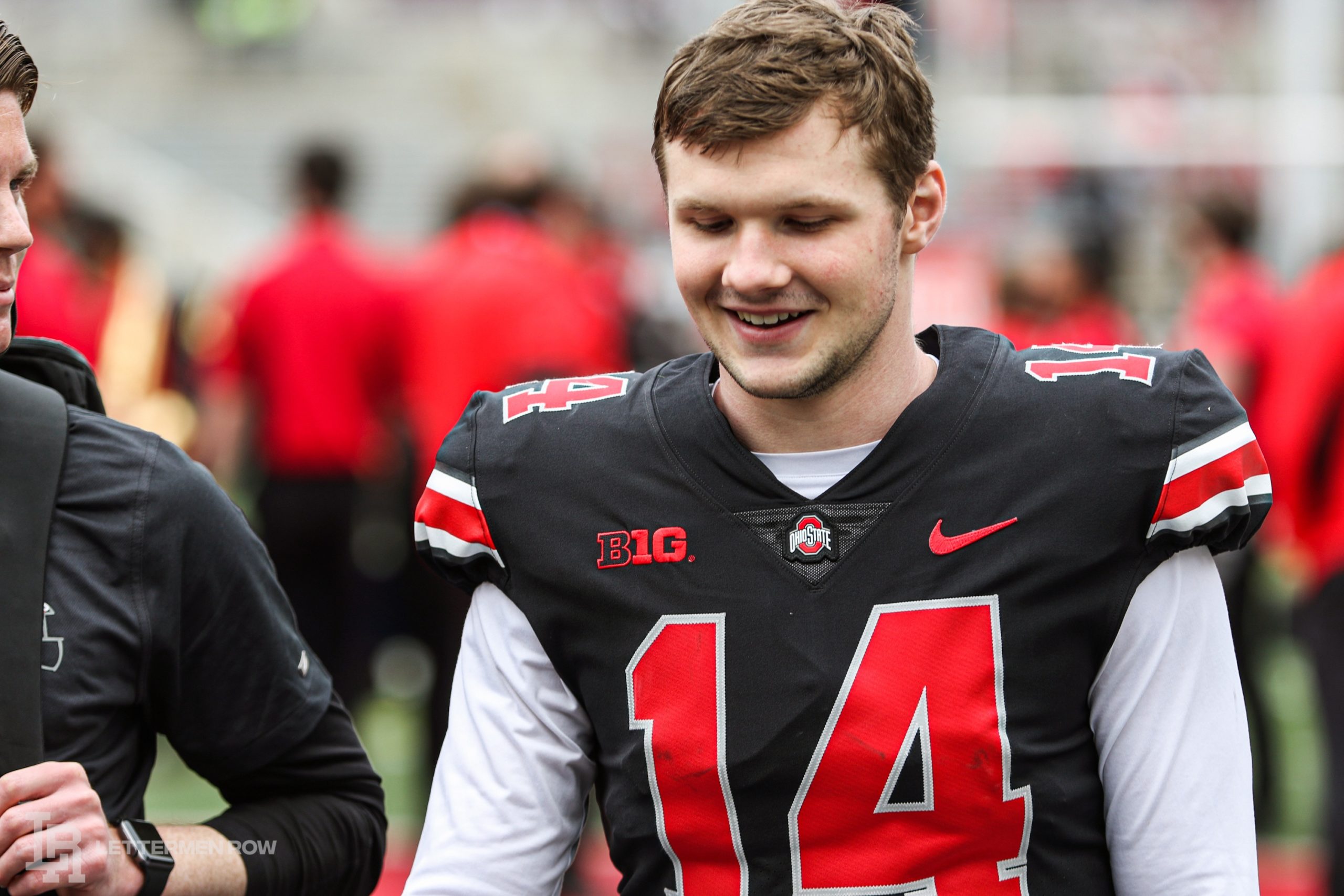 Can Kyle McCord sneak into lineup for Ohio State?

Perhaps nobody left the Horseshoe in April with more buzz than Kyle McCord, and his physical tools certainly look far more polished than most early-enrollee quarterbacks. The freshman was a five-star recruit for a reason, and the way he fired off deep balls and the confidence he showed with his decision making was certainly impressive even in a scrimmage setting. The general expectation coming into spring was that even that one year of experience in the program for both C.J. Stroud and Jack Miller would make it a challenge for McCord to climb the depth chart, and that may still be the case given how much of the playbook there still is for him to learn. But McCord made it clear that he can be a major factor in the race, and he is doing everything he can to climb up the depth chart in a hurry.

How will Jack Miller respond to challenge?

Mistakes in a spring game aren’t the biggest deal to coaches, and Ryan Day spent all of spring hoping that his young quarterbacks would make some in practice. There is no way to learn without dealing with adversity, and the key is simply correcting any errors and turning that into growth. So, from that perspective the early interception Jack Miller threw and another throw that probably should have been a turnover offer him potentially valuable lessons — particularly since they came in a public setting. Miller has big-time ability and brings all the physical tools needed to guide the Ohio State offense, and he had shown that to the coaching staff during the previous 14 practices. But with most of the outside attention now shifting to C.J. Stroud as the projected starter and Kyle McCord turning heads in the Horseshoe, Miller has a chance to show how he can respond to a challenge.

How will Ohio State offense change?

Both Ryan Day and Kevin Wilson have proven repeatedly that they can mold an offense to the strengths of their quarterback and won’t just stubbornly stick to one system. So, with all due respect to Stroud, Miller and McCord — how will the Buckeyes adjust without the otherworldly athleticism of Justin Fields? Both Stroud and Miller have already shown in games for Ohio State that they are mobile than perhaps they get credit for. And honestly the Buckeyes tried hard not to simply rely on the legs of Fields anyway, which was helped by the fact that he played as more of a pass-first quarterback anyway. If any tweaks are made, there has been some interest by the Buckeyes to incorporate more Run-Pass Options into the playbook, something that both Day and Wilson have toyed with in the past. The benefit for the Buckeyes right now as they look to continually evolve is that all three quarterbacks on the roster have roughly the same skillset, which means it could be a bit straightforward to build a playbook that doesn’t require many tweaks depending on who wins the job.