The speculation, debate and conversations about Ohio State never end, and Lettermen Row is always ready to dive into the discussions. All week long, senior writer Austin Ward will field topics on the Buckeyes submitted by readers and break down anything that’s on the minds of the Best Damn Fans in the Land. Have a question that needs to be tackled, like the one today on Urban Meyer not using quarterback sneaks? Send it in right here — and check back daily for the answers.

Why don’t we ever use the QB sneak

There has been no hotter topic around Ohio State than how this version of the offense is going to handle short-yardage situations after failing to convert once on Saturday against Penn State and just barely moving the chains on another occasion. For a program that has been perhaps the most successful in the country with leaving the offense on the field to convert in those pressurized situations, it feels a bit odd to be questioning whether or not the Buckeyes have the right approach when it comes down to those crucial fourth-and-1 scenarios.

So, why won’t Urban Meyer just put his quarterback under center and plow him ahead to get the necessary yardage? After all, it should be easy enough with a 6-foot-3, 218-pounder taking the snap, right?

“Lot of different reasons,” Meyer said on Monday. ” … We’ve had those conversations over and over again. We did that a little bit with Cardale Jones in 2014. Those are conversations we have had, and I’m not saying we won’t.”

Odds are, though, that the Buckeyes will stick with what they normally do in the shotgun formation with their power-spread offense. And here are three of those primary reasons why that’s what Meyer will stick with moving forward. 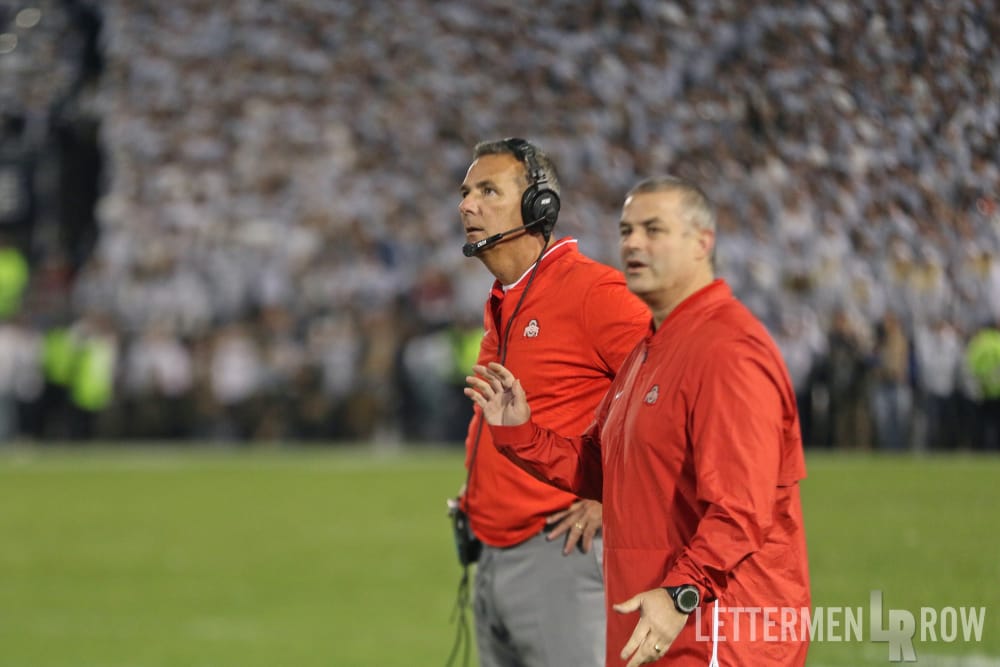 Urban Meyer isn’t likely going to change his ways much with Ohio State and the short-yardage offense. (Birm/Lettermen Row)

Put the fact that Ohio State operates its offense almost exclusively with shotgun snaps as the primary reason quarterback sneaks are out of favor for the program. It’s a different technique for the center, the unfamiliarity can cause issues with the exchange and there is still pressure on the quarterback to secure the snap. Yes, it’s possible that the Buckeyes could add that to the practice routine. But would carving out time to work on those snaps be worth it for one play? Probably not, especially when Ohio State is still trying to make sure that converted guard Michael Jordan is on point with his snaps to run the rest of the playbook.

Quarterback sneaks are an effective way to move the chains, there is no doubt about that. But it’s not unstoppable, and even the guy considered the all-time master of moving that pile at quarterback gets stuffed from time to time, with New England quarterback Tom Brady coming up short on around 10 percent of his attempts. While that’s an extremely high success rate, that’s above average — and it helps a defense when it can be reasonably certain that a sneak is coming. There are only so many places the quarterback can go with the football if he’s keeping it. That allows for a loaded box and not many options with a lot of beefy, strong dudes looking to collide with the most important player on the roster.

Plenty of short-yardage success over the last couple years did come with the quarterback still keeping the football, and J.T. Barrett’s ability to pick up those tough yards helped him win a bunch of games. In some respects, the QB Power was almost as predictable as a Sneak, but more often than not it still couldn’t be stopped thanks to Barrett’s toughness, a powerful offensive line — and the fact that defenses still had to account for other threats. Think back to another key fourth-and-1 in 2014 with the stakes at their highest in The Game with a national-title run on the line. Ohio State at least wanted Michigan to have to think about defending the entire field when it snapped the ball to Cardale Jones, which helped Ezekiel Elliott bust loose for a 44-yard touchdown that effectively sealed the win. There are risks that come from being more aggressive with the play-calling, but those can come with far greater rewards than just extending a drive by diving into a pile.

Maybe Urban Meyer will change his mind and start working on quarterback sneaks. But there’s enough evidence by now to assume that’s highly unlikely — and if his team can’t get a yard with the normal offense, not using that basic play is the least of his concerns.