COLUMBUS — There wasn’t a neat, tidy solution for Ohio State at quarterback.

Ryan Day probably wasn’t ever expecting one in the first place heading into the summer.

Whatever preconceived notions might have already been in place leading into the spring game on a gorgeous Saturday at the Horseshoe surely didn’t change based on what was on display in a scrimmage that officially will go down as a 35-17 win for the Gray over the Scarlet.

Justin Fields is a dynamic athlete, and he delivered a deep ball that is almost certainly going to stand in the exhibition record books for years to come. Matthew Baldwin forced a couple throws and was picked off twice, and he doesn’t have the flashy speed to give the Buckeyes a rushing threat at quarterback.

Or flip the script another way and Baldwin showed more zip on the football and combined for arguably the most impressive play of the game when he hooked up with his old buddy Garrett Wilson for a jaw-dropping touchdown. For all of the dual-threat potential in Fields, he looked uncertain at times in the pocket and only completed 4 of his 13 passing attempts. 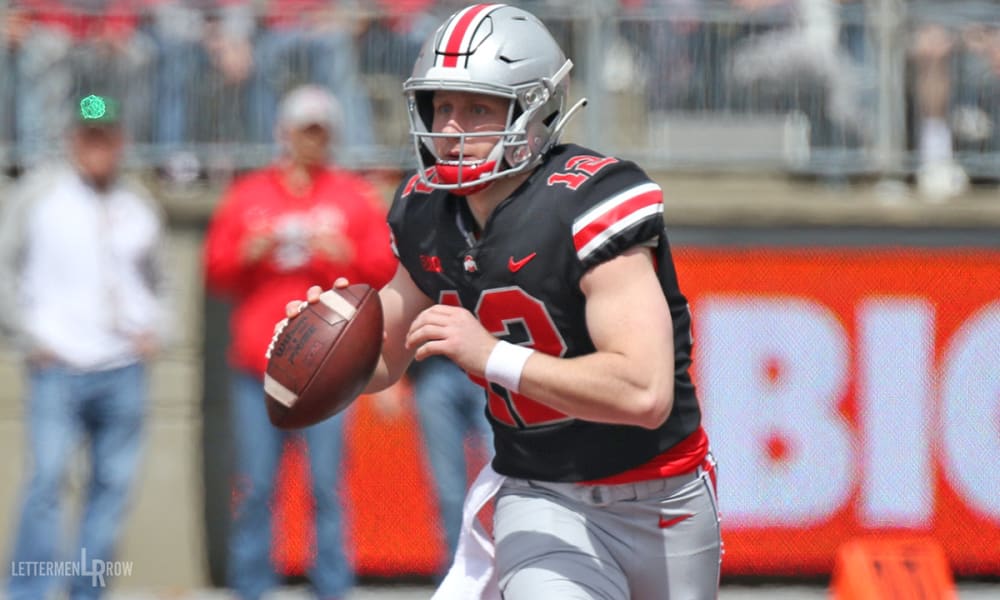 Either way, the reality is the public showcase of Ohio State’s two top options at quarterback was never going to be a deciding factor in the long run. But it was a clear reminder that both of them still have a long way to go as the Buckeyes try to replace a Heisman Trophy finalist at the most important position on the roster.

“I think they both did a good job today, they both flashed at times,” Day said. “Still a work in progress, still have work to do. But I thought they gave some of the receivers a chance at times, and sometimes it’s hard when you’re not in a tackle situation — is it a sack, is it not? Justin can kind of create on the edge a little bit, and we didn’t get a chance to see that as much. I thought Matthew made a couple really nice throws down the field, but we turned it over a couple times and threw it to them.

“We’ll keep looking at it, but I thought both of them had positive days.”

The Buckeyes were always going to have to grade on a scale thanks to the absence of key contributors that limited just how much work could get done, most notably with a short-handed offensive line that kept both Fields and Baldwin under a lot of pressure. And to be fair to both guys, Ohio State already had 14 previous workouts to evaluate them that should all carry more weight when it comes to a decision about the next starter to lead the attack.

But there is also still value in seeing what those passers can do in front of a crowd in the Horseshoe. Those were real plays being called, a real defense was on the field and it was a real chance to make a strong impression on a big stage. And even if it’s wise to take those reps with a heavy pinch of salt, both Fields and Baldwin were clearly hoping to make the most of the opportunity.

“Overall, this spring there were ups and downs,” Fields said. “That just comes with the growing pains, like coach says. I just have to keep improving, keep working and I think we’ll be good come the season.

“I feel like I’ve only scratched the surface. If I had to grade myself out today, I feel like it would be like a C-plus. I’m very hard on myself, so I’m kind of a perfectionist. But I just see us scratching the surface, and I definitely see us having a bright future.”

That was on display at times with both of them, and there were certainly enough encouraging moments for Fields and Baldwin to see how much potential the Buckeyes have moving forward. By no means was the inconsistency on Saturday a cause for concern for the Buckeyes.

Fields can go into the offseason with the good vibes that come from a 98-yard touchdown toss. Baldwin has 20 completions in Ohio Stadium now under his belt and that touchdown toss to Wilson as signs of his progress coming off a season on the sideline thanks to a knee injury. Day isn’t going to turn a blind eye to any of the struggles, obviously, but they also shouldn’t come as a surprise with a pair of guys who should have been going to prom at this time a year ago.

“When you had Joe [Burrow] and Dwayne [Haskins] here, they didn’t have a body of work on the field, but they had a body of work practicing,” Day said. “For the coaches and myself, we had gone through it and kind of knew what we had and had seen them in the game, so we had to kind of make a decision who was ahead. The guys we have here, these guys should have been in high school at this time last year.

“They don’t have that body of work, they’re still a work in progress, they’re still growing, they’re still making mistakes. So, to say we know where they are in terms of a finished product, it’s hard to tell. They still have a long way to go.”

The Buckeyes still have plenty of time to get there, obviously. But the first phase of the process is now over at Ohio State, and the spring game can serve as a useful reminder that nothing about it is going to be easy.