Have a question about Ohio State recruiting? This is the place for you, five days a week. Submit your questions on Twitter or on the Lettermen Row forums. Check-in daily to see what’s on the mind of Buckeyes fans all over the country. Today’s question is about the receiver position as the Buckeyes look to recover from unexpected roster changes.

With the Kaleb Brown crystal ball, whats your best guess on the final WR to join the class assuming we take 3 total. (Burton, Grayes, ??)

While I don’t usually indulge too much in the crystal-ball world and the trappings therein, there is some real momentum developing in the Buckeyes recruitment of Chicago’s Kaleb Brown. The country’s No. 6-ranked receiver plays his cards close to the vest, but he’ll make an important two-day unofficial visit to Ohio State in early June. If that goes well, I think his recruitment could accelerate quickly toward an official visit later in the month and perhaps then a commitment becomes likely.

Brown has been on the periphery of the receiver conversation for much of the last year, though. We’ve written about Kojo Antwi and C.J. Williams a lot, and that duo has been near the top of the list. Antwi will make his official visit in June, whileÂ Williams had to cancel his with an eye toward a reschedule during the season. With Caleb Burton and Kyion Grayes committed, there’s been some belief that the final piece could be a who-wants-in-first situation. Maybe that was the case for a while, but that could be changing.

There’s a lot of talent in the Buckeyes receiver room, obviously. Jameson Williams transferring unexpectedly and another injury for Kamryn Babb have hurt the numbers for the future. Plus, it’s an almost ironclad guarantee that Garrett Wilson will head off to the NFL after this season, so the 2022 roster will be down at least one more body. Then there’s the chance that Jaxon Smith-Njigba and Julian Fleming make the same NFL decision after next season. The deep and talented room will need a restock — and that means signing four receivers in 2022 is now a possibility. 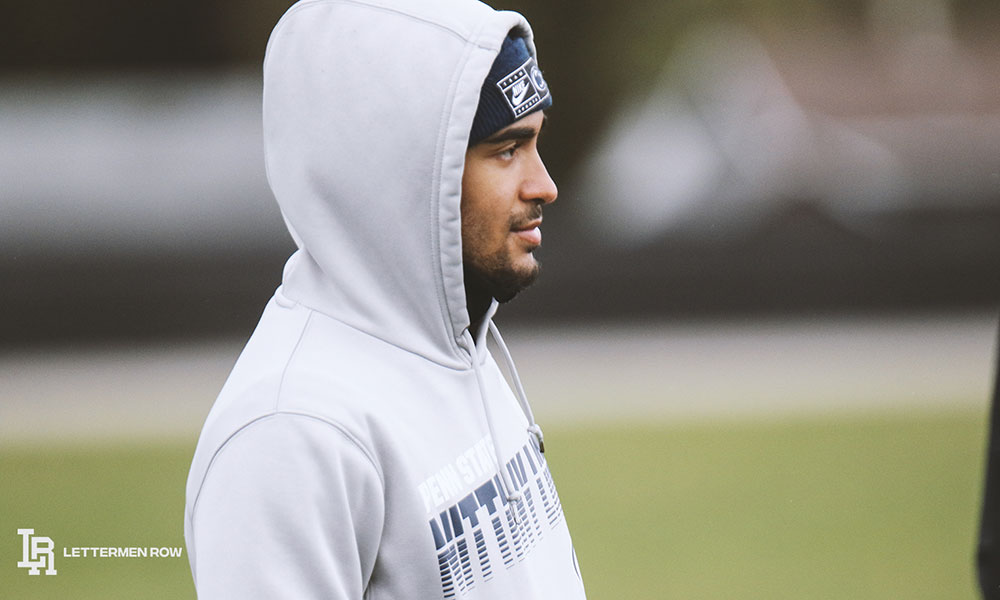 Kaden Saunders lives down the road from Ohio State and is one of the country’s fastest 2022 prospects. (Birm/Lettermen Row)

We’ve already talked about some of the names that people should know. The big three of Antwi, Brown and Williams remain top-of-the-list priorities. If it’s possible, the Buckeyes would love for the two additional receivers to come from that trio. That seems unlikely. It was also unlikely that Mookie Cooper, Gee Scott, Fleming and Smith-Njigba all ended up in the same recruiting class in 2020 and that happened, so it’s silly to rule anything out.

But the more likely scenario is that one of those three end up committing to Ohio State. Then Ryan Day and Brian Hartline will sift through a number of other options as receiver No. 4. Who gets the attention of the staff? The guys that show up and prove they’re a Buckeyes-caliber athlete and receiver this summer can stake their claims early.

We know that explosive athlete Landon Samson will camp in Columbus, but for a handful of potential targets that remains undetermined. There’s been a recent reconnection with Darrius Clemons, but he’s not sure if he will come work out or if he’ll focus on the schools that have offered. Andre Green, a 4-star receiver from Virginia, is in the same boat. Penn State commitment Kaden Saunders remains an interesting option as well. But he’d likely have to show up at Ohio State to work out. Doing that would almost certainly require him reopening his recruitment as James Franklin isn’t keen on his commits trying out for other programs.

In short, if any players around the country want to be the final piece of Brian Hartline’s 2022 class, they’ll have to earn it in Columbus. That’s worked out for guys like Terry McLaurin, Denzel Ward, Darron Lee and Evan Pryor in recent years.

Much has changed about recruiting in the last year but normalcy is returning. That means the old way — live evaluation of a prospect — can once again take precedent for Ohio State.