COLUMBUS — The battle for 5-star 2023 cornerback A.J. Harris looks like it could be a three-team race.

Ohio State, Notre Dame and Clemson each took a massive swing at the Glenwood School (Phenix City, Ala.) standout in the last week.Â The Buckeyes got their chance on Wednesday, making the most of it and leaving a major impression on the 6-foot-2, 180-pound rising-junior.

“I expected Ohio State to be a really good visit,” Harris told Lettermen Row. “But it was better than I thought it’d be. Everything about it.”

More than anything, Harris had been looking forward to connecting with Kerry Coombs. The Buckeyes defensive coordinator has clicked with the country’s No. 2-ranked cornerback since offering in March. That carried over into this visit and onto the field.

“Like I said, I expected it to be like this in some ways,” Harris told Lettermen Row. “You really have to meet people to see if they’re genuine, but with Coach Coombs, I could tell how he was on the phone. I really didn’t have to meet him in person to understand that he was a genuine person, and he’s someone that I trust.

“We definitely built the bond over the phone, which is crazy. I trust him, and I trust what he was telling me was the truth. So when I came here, I just believe this could be the place to be.”

Coombs worked out Harris for a bit in front of a large media gathering. The fleet-footed cornerback and the venerable defensive coach laughed, joked and competed, with Coombs sprinting around the turf with Harris. The 59-year-old former NFL cornerbacks coach resonated with the current 17-year-old. 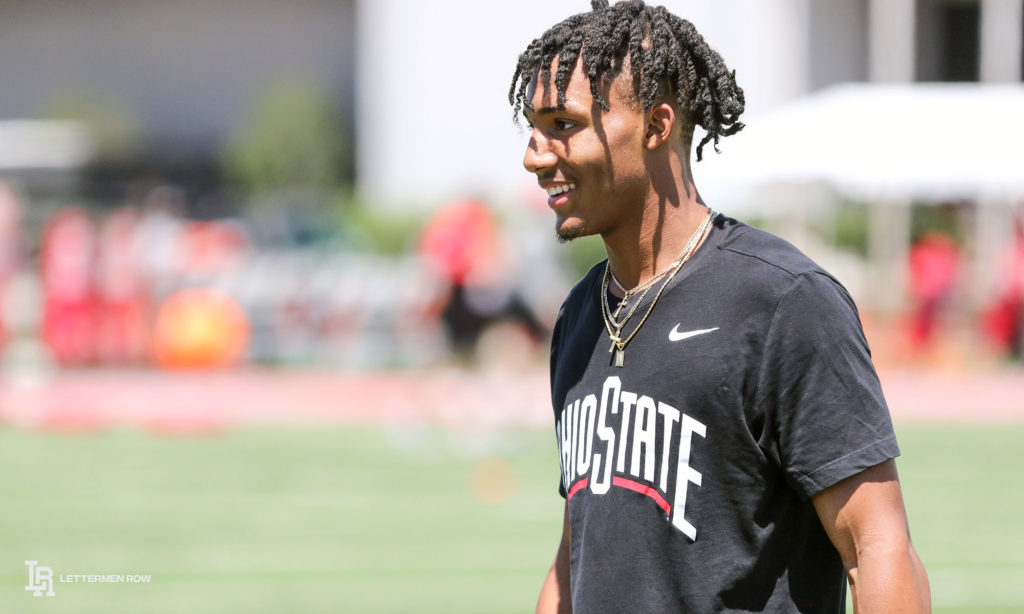 A.J. Harris was all smiles during his first visit to Ohio State. (Birm/Lettermen Row)

“For him to be the age he is and still relate and get to know his recruits and all of his players is just amazing, because you don’t get that everywhere. Someone his age is running around and still connecting with kids our age, that was big for me.”

It’s not just about energy, of course. Coombs history as a defensive backs coach matters. Not in development even, but teaching.

“He taught me a lot of new things today, things that I learned that I can take with me back to high school and go do in the season,” Harris said. “I just learned so much from him, man.”

Buckeyes coach Ryan Day had not been too involved in the recruitment of A.J. Harris before Wednesday. Expect that to change as the 5-star cornerback really hit it off with the Ohio State leader.

“I learned a lot of new things when I was talking to him, which is that’s something that I like to look for. I want to be around someone I could learn from daily and things like that. There was nothing forced about anything, just good conversation. He was very genuine.”

As a big-time prospect from Alabama and Georgia border, there’s been an early expectation that his recruitment would end up being an SEC battle. After a week that saw trips to Clemson, Notre Dame and Ohio State, that doesn’t entirely appear to be the case. There’s a bigger picture for Harris, and he seems to be narrowing in on a three-team battle. 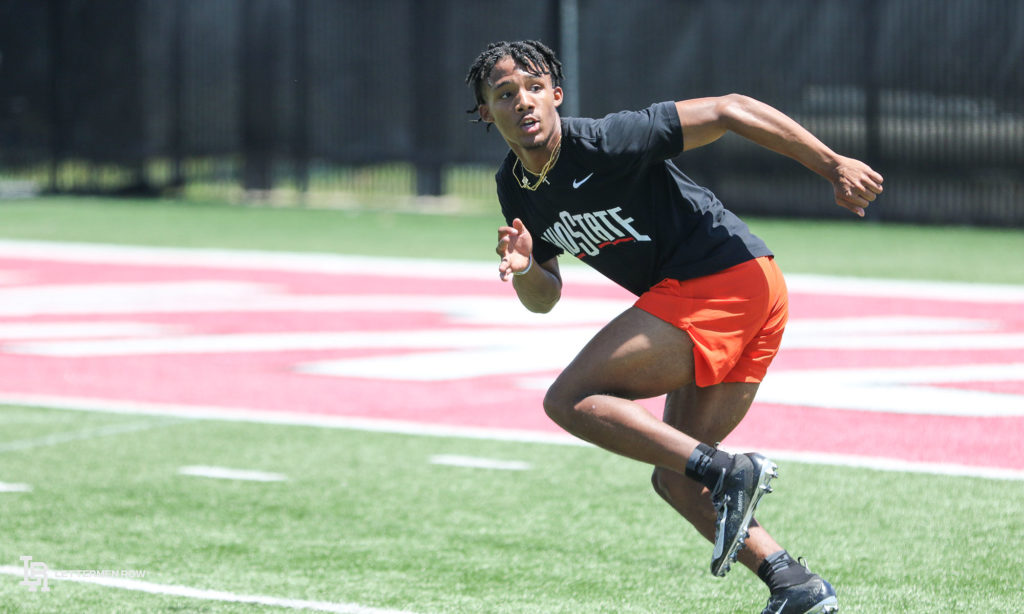 “What has made those visits different for me was just recognizing what they can do for me off the field as well as on,” Harris said. “Those schools, if I ended up there, I know my academics are being taken care. I know I’d be in an environment to be set up for the rest of my life, academic wise, because football doesn’t last forever. So just the thing that definitely makes them all different is the atmosphere. The coaching staffs being genuine with me and my family and just showing us love because I couldn’t say I got that everywhere. That was big for me and my family.

“When I got to meet a few of the players, they all welcomed me and my family instantly. There weren’t any kind of weird feelings or nothing like that. It all felt really genuine when I talked to the players as well. I will have to be with these guys 24/7, so that was a big thing to me.”

Harris has suggested in the past that a decision could come before his junior season. That is still a possibility. There is no decision date, but there’s likely to be decision discussion. He doesn’t want to commit somewhere and then look around, he wants to lead.

“I’m very close, and I plan to definitely talk to my parents about it,” he said. “We’ll be talking about a commitment. But it is definitely just something that that we want to get out the way. Once I’m locked in, I’m locked in. I’m just going ahead and being a leader of recruitment — like just go ahead and start recruiting the other 2023 players that can help us go win a national championship..

“Whatever school I go to, I’m going to be an elite recruiter and do the best to help my program win a [national championship].”

Maybe that program will be Ohio State. The Buckeyes left him with a lot to think about.

“The whole coaching staff, the running backs coach to the tight ends coach and wide receivers coach to the head coach — they were all there for me and got to know us,” A.J. Harris said. “You can’t really make a decision based off of your position coach, because it’s business right? You never know when he’s going to leave. So you got to know that wherever you go, you’re comfortable.

“That was what I saw. It’s a genuine family feel from the whole coaching staff and the people around were nice as well. That’s what Ohio State meant to me.”