COLUMBUS — Anthony Brown came back to Ohio State with a purpose.

He camped with the Buckeyes earlier in the month, flashing his speed and potential. But it wasn’t enough to secure an offer from his dream school.

A Springfield native and the fifth-ranked player in Ohio’s class, Brown hasÂ picked up offers from Michigan and Penn State in the last two weeks. Neither are the offer he is looking for. His 5-foot-10, 160-pound frame have kept the Buckeyes away from extending an offer, even though he’s nearly impossible to cover in one-on-one drills.

But that hard reality hasn’t deterred the wide receiver from earningÂ the Buckeyes offer he is looking for.

Brown returned to Ohio State for his second camp this month on Tuesday, working out with Brian Hartline and returning punts in front of the Buckeyes coaching staff. His game-changing speed has the Buckeyes thinking he can be a weapon in the special teams game

“I wanted to accomplish like, catching punts,” he said. “They told me to come back to catch some punts.

“I think I perform well, showcasing my hands. Last time, I really didn’t get to catch how I wanted to. So this time I came back to show off my hands.” 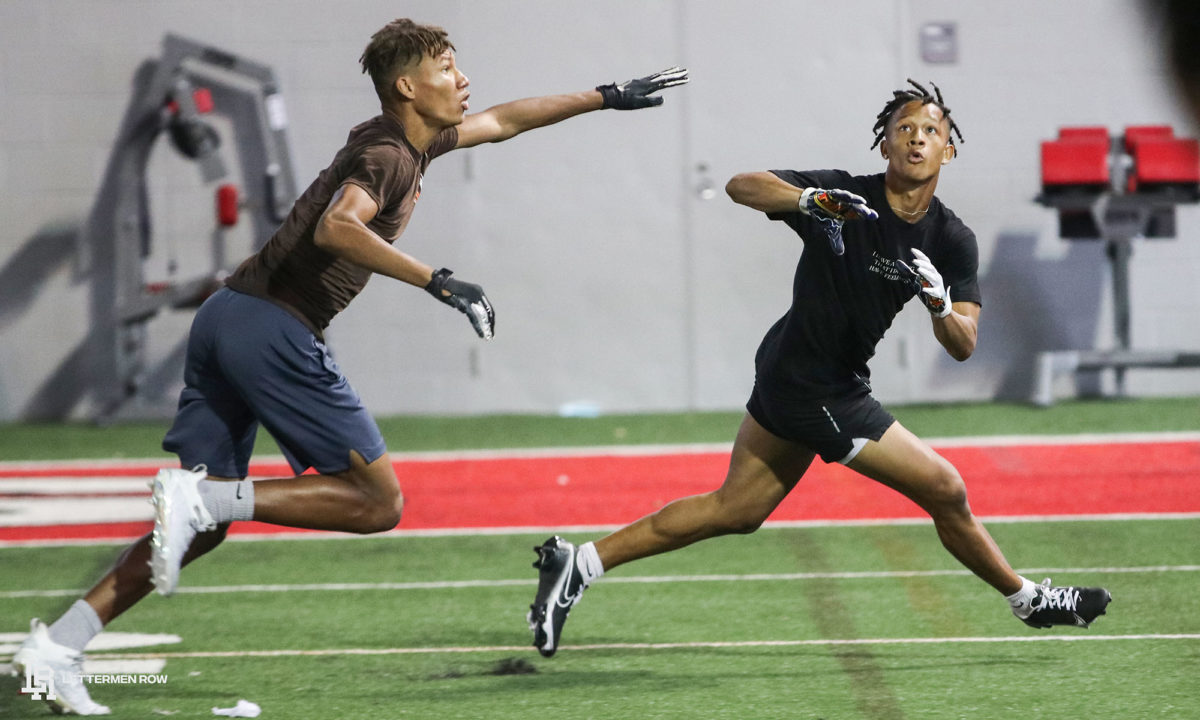 Anthony Brown came back to Ohio State for his second camp in the month of June. (Birm/Lettermen Row)

Along with his session catching punts, heÂ joined a cast of the top receiver recruits in the 2023 class. Brown went through workouts with Carnell Tate, Santana Fleming and Brandon Inniss, standing his ground and proving he belongs next to some of the best in his class.

Currently a top-200 recruit and the No. 21 overall receiver in the country, he has the skills to be an elite wideout. He has the frame to be a threat inside at the slot, and his speed makes him a nightmare to defend. And as he showed off in his second Ohio State camp, his ball-catching abilities are impressive.

“Yeah, I feed off of it,” he said. “All the time, you know, because they’re one of the best in the nation. So me going against them, I mean, hanging with them, learning from them making us all great.”

The other byproduct of Brown’s second trip to Columbus was more time around Hartline. As a in-state recruit, Brown doesn’t need much persuading to come to Ohio State. But with more time around the wide receivers coach, he has quickly picked up plenty of little things to improve on — and seen up close why Hartline is considered one of the top in the country.

“I think Coach Hartline, the first time I came in, he didn’t really get a one-on-one with me — but this camp kind of got like, a one-on-one together,” Brown said.Â “He was great. He knows what it takes to get there [NFL]. And he knows you have got to be one of the fastest. His technique is really there, so that’s one thing we kind of worked on today.”

Ohio State has recognized the talent Anthony Brown brings, but the Buckeyes are still weary of his height. They had him catch punts because they know he could be a weapon for them at some point.

With 15 offers and counting, Brown’s stock is only rising. But he knows where he wants to play, and he is content grinding away until his dream school finally offers.

“This being my hometown, it’s a blessing because as a kid from Ohio and an Ohio State offer, that’s a big dream,” Brown said. “So if I get this offer, then I don’t know what to say.

“All this hard work I’m putting in finally is paying off. So we’re gonna keep working.”