Stay in touch or be left out because Ohio State recruiting is a 24-hour, seven-day-per-week obsession. What’s the latest news as the Buckeyes build for the future? Get that and more Sunday through Thursday on Lettermen Row. Sunday’s notebook goes in-depth on a handful of the most important players that visited Ohio State for the Buckeyes home game against Michigan State.

C.J. Stroud trending up and toward Ohio State

Ohio State welcomed in Rancho Cucamonga (Calif.) 4-star quarterback C.J. Stroud for his first visit to Columbus, a trip that was pivotal for both sides as the country’s fourth-ranked pro-style quarterback advances toward a college decision.

Stroud has handled his recruitment very privately but it’s clear that the relationship between him and Ohio State has grown quite a bit since Ryan Day began reaching out in June because the momentum has been building toward this visit for a while.

The Buckeyes obviously have a quarterback commitment but Jack Miller is aware they’re going to try and complement him in the class and that’s why it was so valuable for Ohio State to have its full roster of commitments on hand to try and make him feel at home. The relationships between Miller and guys like Lejond Cavazos, Gee Scott, Jaxon Smith-Njigba, Julian Fleming and others are long-term and well-documented. That is not the case with Stroud but it was pretty clear watching him stroll around the field at Ohio State on Saturday evening that he was feeling comfortable in Columbus and that the Buckeyes commitments on hand were well aware of who he was and why he’s important to the class of 2020. 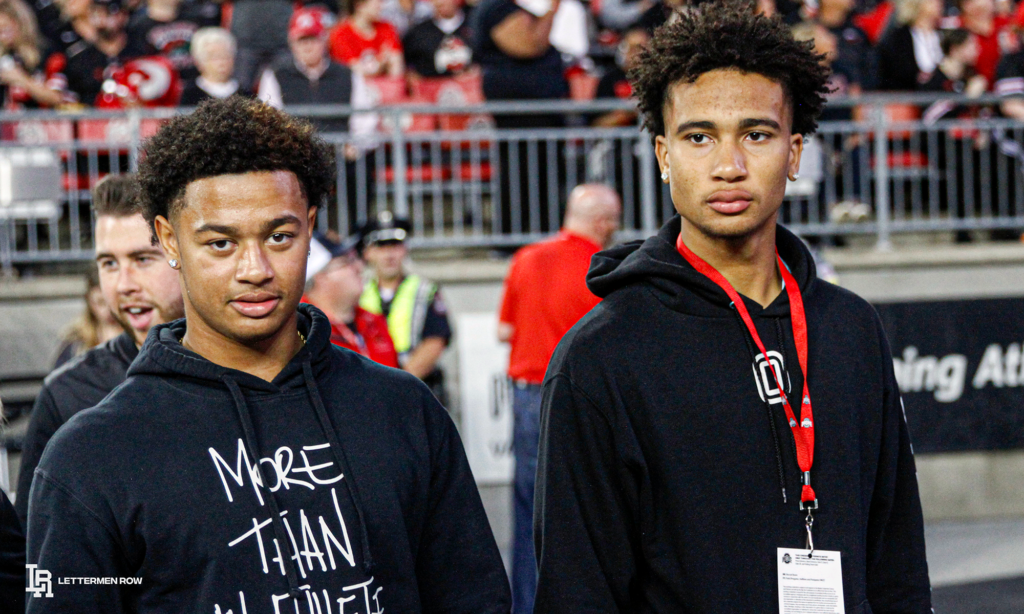 There are a lot of things that could happen from here at the quarterback position for Ohio State but at the moment the vibes coming from the Buckeyes program and the people who spent time with Stroud on his visit are very positive.

The expectation is that Stroud will still take a few other visits and will return to Ohio State in November for an official visit with the Buckeyes, a trip that will include his mother, who did not make this trip.

One additional positive working in the Buckeyes favor? Stroud was on campus with his personal quarterback trainer, Quincy Avery, who is also the trainer for Dwayne Haskins and Justin Fields.

Long way to go probably, but things are looking very good for Ohio State when it comes to the pursuit of C.J. Stroud.

There’s not a single position we’ve talked about more in the 2020 cycle than the running back position and as we said a few days ago, the battle to add a tailback this year had its first real push since July over the weekend. Ohio State had Lancaster (Texas) 4-star Kevontre “Tre” Bradford in town for his official visit after offering him a scholarship in early August.

The visit for Bradford was similar to the visit for Stroud in that it was his first visit to the school and in a lot of ways, it was more of an “interview.” The Buckeyes are trying to get a better read on who he is and how he’d fit in their program.

It’s easy to see the talent on tape but it’s not always as easy to see how guys mesh personality-wise and in a place like Ohio State that is as important as anything else during a player’s recruitment. There remains work to be done in this regard for the Buckeyes and Bradford.

Right now, the relationship is still being cultivated and there will be no slowdown from Ohio State in getting more familiar with Bradford or any other interested running back but if you were expecting an answer this weekend that’s not coming. The Buckeyes will still have Miyan Williams, the Iowa State commitment, get on campus soon in Columbus and continue their pursuit of Georgia Tech verbal Jahmyr Gibbs as well.

Are the Buckeyes team to beat for defensive end Tyler Baron?

One of the three official visitors to Ohio State to this weekend was Knoxville (Tenn.) Catholic 4-star defensive end Tyler Baron. The country’s third-ranked strongside defensive end left Columbus just after 4:00 p.m. on Sunday and let Lettermen Row know things went as expected and that the Buckeyes are sure to remain in the conversation for his services moving forward.

“It was a great visit,” Baron told Lettermen Row on Sunday. “It’s just how close the team was and how prepared the team was going into the game.

The top schools for the 6-foot-5, 255-pound Baron are known, beyond that everything else seems to still be up in the air. He had planned a decision for the end of October but said that’s no longer likely to happen.

“It’s Tennessee, Ohio State and Kentucky, in no order,” he added. “I’ll probably postpone my decision. I’m just not ready yet.”

The Buckeyes are still looking for another defensive lineman and Baron is up near the top of the current list.

There success that Brian Hartline has had on the recruiting trail since taking over the role of full-time receivers coach at Ohio State has been talked about at length. Ohio State has landed a majority of its top targets at the position since then but the mettle for Hartline as a recruiter is going to be tested again in the Class of 2021.

How will the Buckeyes convince big-time junior talents to come to Columbus knowing that four of the country’s Top 10 seniors receivers are committed in the Class of 2020?

Relationships win in most cases and that’s why Hartline appears to have narrowed down his personal list in 2021 already and he and the Buckeyes welcomed in a major priority on Saturday. 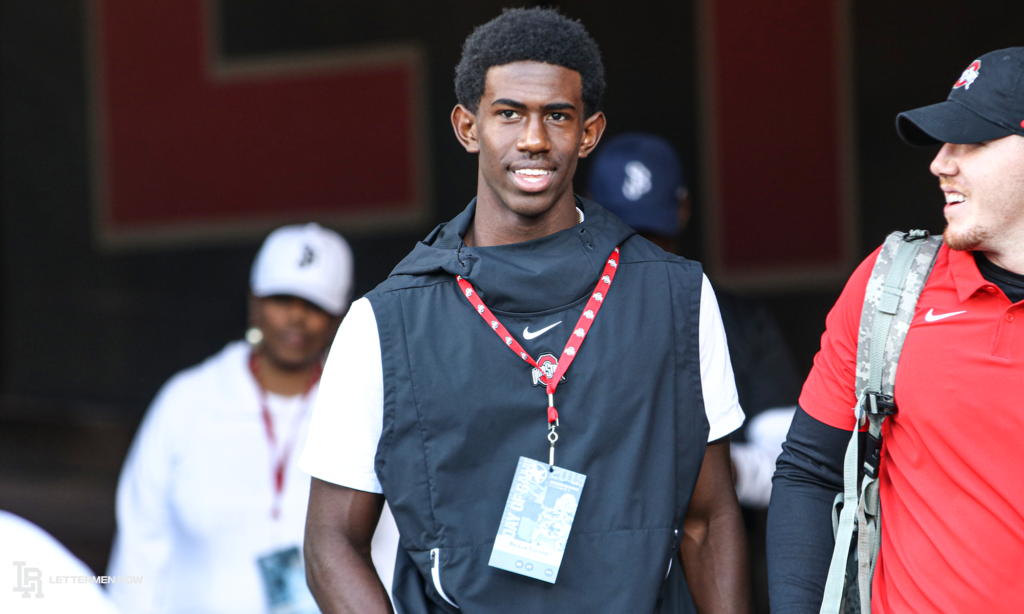 Beaux Collins during his unofficial visit to Ohio State on Oct. 5, 2019. (Birm/Lettermen Row)

Beaux Collins was scheduled to visit Ohio State in November but instead made the trip for the Michigan State game and was the first player on the field among the near 50-some recruits who attended the game. He was comfortable, making his way between Jeff Hafley and Hartline and players and his peers. He and his family spent a lot of time talking with Kyle McCord and his family on the sidelines pregame.

A trip to Clemson is likely soon for Collins and it seems almost a foregone conclusion that the battle for his commitment will be a two-team race between the Buckeyes and Tigers.