Have a question about Ohio State recruiting? This is the place for you, five days a week. Submit your questions on Twitter or on the Lettermen Row forums. Check in daily to see what’s on the mind of Buckeyes fans all over the country. Friday’s discussion is about the defensive line and where Larry Johnson and Ohio State will focus to fill out the 2020 class.

If Coach Johnson reshuffles the D-line recruiting board and goes “big game hunting” for some big name recruits, who are the top 5 (committed or not) he might go after?

It’s always interesting to watch Larry Johnson on the recruiting trail. The Ohio State defensive line coach is not only one of the more successful recruiters in the country and has been for a while — but he’s also one of the more methodical.

Johnson doesn’t usually offer a player until he’s seen that player in person, usually at an Ohio State camp. And even then works at a much slower pace than most of his peers as he builds rapport with the player, his family and his coaches. It’s a welcomed departure from the sped-up nature of recruiting everywhere else, but it also sometimes presents this notion that Johnson is lagging behind when he’s doing nothing of the sort.

Ohio State has two defensive line commitments in 2020. Each player is one that Johnson and the Buckeyes coaching staff has known for years: Ty Hamilton, the younger brother of current Ohio State defensive tackle Davon, and Darrion Henry, a player Johnson has worked with and recruited during multiple summers.

Those relationships are solid and strong. And though each player is ranked lower than might be expected based on their Ohio State offers and commitments, Johnson took them both for a reason. And he isn’t done at the position for 2020 and will continue to look from coast-to-coast for a player or two to complement the home-state verbals.

There are names that we’ve mentioned in the past who still warrant watching as the summer gives way to the fall, and I’m not even referencing guys like Kedrick Bingley-Jones or Jacolbe Cowan, who made official visits in June. We’re talking big fish today, and yes, there are guys out there who the Buckeyes will try and reel in — though the fight may be decidedly uphill in a number of these cases. 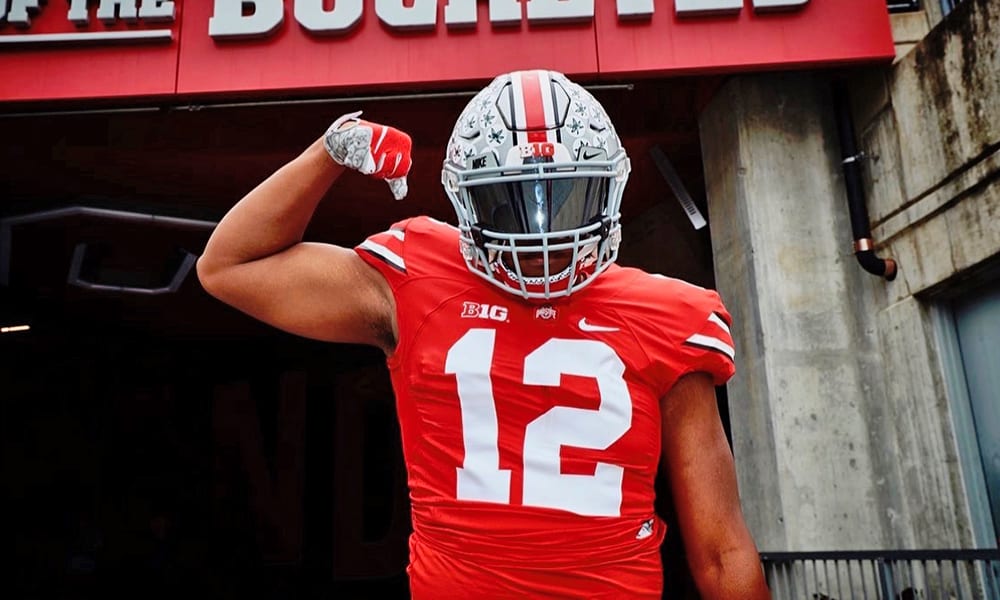 Jacolbe Cowan is still worth paying attention to if you’re a Buckeyes fan. (Jacolbe Cowan/Courtesy)

The country’s top-ranked overall player is from Hammond (Columbia, S.C.) High School, and the odds are that Jordan Burch will end up staying in the Palmetto State for college. But Johnson is hoping to build a bond with him. He’s already done a remarkable job getting familiar and comfortable with 5-star North Carolina standout Desmond Evans, who is expected to make an official visit to Columbus in September.

Do not expect the Buckeyes to have any chance of flipping a player like Bryan Bresee, despite early interest in Ohio State from him. Ohio State is one of a handful of schools paying close attention to young Miami-area defensive end Donell Harris, who recently reclassified into the Class of 2020 from the 2021 group. But there’s not going to be much of a push yet from the Buckeyes if there is one at all. Tennessee standout Tyler Baron seems likely to stay close to home, and it doesn’t appear there’s much of a chance he ends up in Columbus, either.

There are others out there though, guys like Texas A&M commit Fadil Diggs who has always had Ohio State’s attention. I wouldn’t be shocked if he ends up visiting Columbus at some point this fall. 4-star Tennessee prospect Jay Hardy is another name that continues to be worth watching, especially after his June unofficial visit with the Buckeyes.

If you move out west a bit where Ohio State has had a good run of success in the 2020 cycle, keep an eye on a pair of Utah prospects: 4-star lineman Xavier Carlton and 3-star prospect Van Fillinger.

There are so many names to watch around the country. It’s important to keep in mind that Johnson recruits differently than a lot of other guys out there. He’s looking for people who fit his system, can be developed and coached and who will welcome his style.