Have a question about Ohio State recruiting? This is the place for you. Check-in daily to see what’s on the mind of Buckeyes fans all over the country. Today’s question is about the defensive line in the Class of 2022 as Larry Johnson and the Buckeyes look to restock the Rushmen.

What are your predictions for the DL recruits for 2022? Who do you think we land? Who and how many must we land?

June was very important for Larry Johnson and Ohio State as it looks to address some real defensive line needs on the recruiting trail.

Every key target in the Class of 2022 came to Columbus at some point. And though the Buckeyes are still waiting for the first commitment at the position, the month was a success. There were relationships solidified — and in some cases created. Johnson has made progress in each of his biggest recruiting battles.

A couple of regular opponents have also been emerging: Primarily Alabama and Oklahoma.

For Ohio State to reel in the defensive line haul it wants in 2022, it’s going to require Johnson being at his best and capitalizing on his reputation and relationships against two of the country’s very best programs.

At defensive end, the Buckeyes are tussling with the Crimson Tide and the Sooners for 5-star Omari Abor. Alabama is a top choice for top-40 prospect Enai White. Oklahoma is considered the primary opposition for Kenyatta Jackson and Gabriel Brownlow-Dindy, who went from no-shot to some shot for Ohio State last weekend. The Sooners were also a long-time favorite for Abor, who grew up rooting for Oklahoma.

On the interior line, Johnson made a major connection with Chris McClellan on his official visit. McClellan has one crystal ball prediction right now, and that’s to Oklahoma. He’s a good candidate to be the Buckeyes first addition along the defensive line in 2022, and the Buckeyes defensive line coach wants him to be the leader of the group. 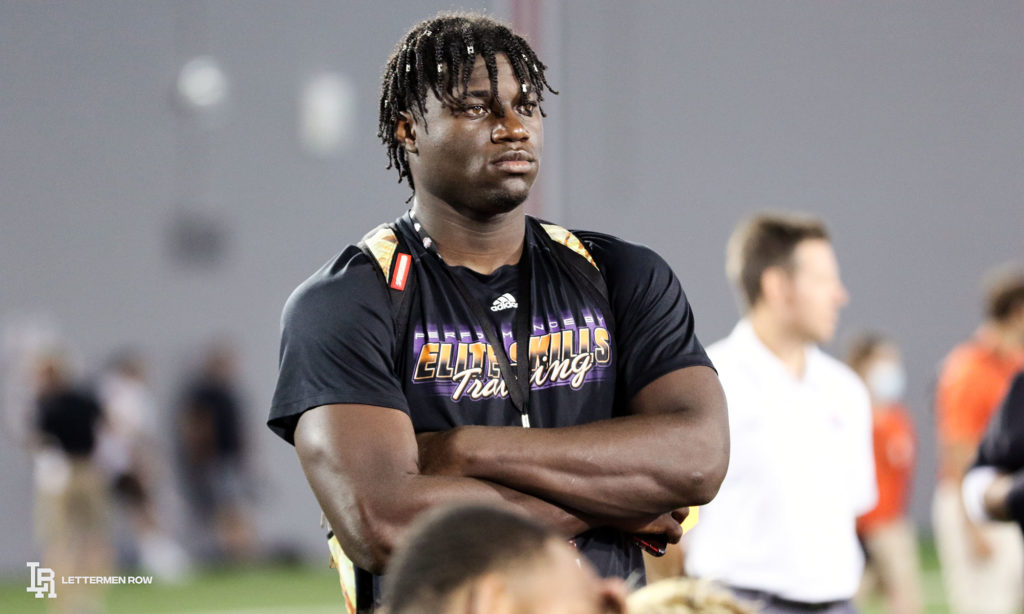 “Coach J was saying that he wants me to lead that defensive line class,” McClellan told Lettermen Row. “I told him Iâ€™d be putting that into consideration and call him with an update in a few days.â€

If McClellan picks the Buckeyes, then he’ll be tasked with recruiting Caden Curry, who is very high on Ohio State, Alabama, Clemson and Indiana. Curry has been priority No. 1 for Ohio State for more than a year, and that’s not changing anytime soon.

Those are the names we’ve heard all along. June was eye-opening for the Buckeyes with respect to Hero Kanu, the big-time German prospect playing in California. He’s a player Ohio State believes is as good as anyone in the country and is absolutely a 5-star player in the opinion of the coaching staff. Indiana’s Kenneth Grant also popped on the radar and is a good player to watch as he heads into his senior season at Merrillville (Ind.)

Plus there’s the random unicorn like Florida’s Shemar Stewart, who the Buckeyes would always find room for.

Ohio State needs at leastÂ five defensive linemen in the Class of 2022. The Buckeyes will lose Haskell Garrett, Antwuan Jackson, Jerron Cage, Tyler Friday and Tyreke Smith for sure. There’s a concern that Zach Harrison and even Javontae Jean-Baptiste could depart early for the NFL. It’s imperative to bring in a big-time class in 2022.

Either way, the targets are right there for the Buckeyes. Ohio State just has to win the battle against two of the country’s best teams, repeatedly.