Have a question about Ohio State recruiting? This is the place for you, five days a week. Submit your questions on Twitter or on the Lettermen Row forums. Check-in daily to see what’s on the mind of Buckeyes fans all over the country. Today we try and sort out the biggest remaining needs for the Buckeyes in the Class of 2021.

Who is the most important recruit in the 2021 class?

Ohio State has the country’s top-ranked recruiting class, the most commitments of any program in the nation and a chance to end up being truly historic if things go as hoped between now and signing day. In order to finish as the recruiting champions in 2021, the Buckeyes are going to need to wrap up a few outstanding priorities that remain around the country.

Two of those pieces are in the state of Washington, where 5-star receiver Emeka Egbuka and 5-star defensive tackle J.T. Tuimoloau reside. The Buckeyes are considered the favorite for each, though Tuimoloau has not yet visited Ohio State and the coronavirus pandemic has put into question whether or not he’ll be able to anytime in the near future.

The need at defensive tackle makes the 6-foot-5, 285-pound lineman very important for the Buckeyes in this class, and the fight for his services will be a tough one. Ohio State, Washington, Alabama, USC, Stanford and pretty much every other big-time program in the country is involved, and Tuimoloau handles his recruitment as privately as anyone in the nation — making it hard for everyone, including the coaches recruiting him, to get a real read on his plans.

As with Tuimoloau, the battle for Egbuka includes many of the best programs in America, but the big three for his eventual signature is probably Ohio State, Stanford and Clemson. He’s perhaps notÂ as important from here as others because the Buckeyes have two good receivers committed and signed four of the top-ranked players at that position in the 2020 cycle. Still, from a perception standpoint — and for the chance to lock up one of the greatest classes ever assembled — it’s very big for Brian Hartline and Ohio State to once again sign the No. 1-ranked wideout in the country. 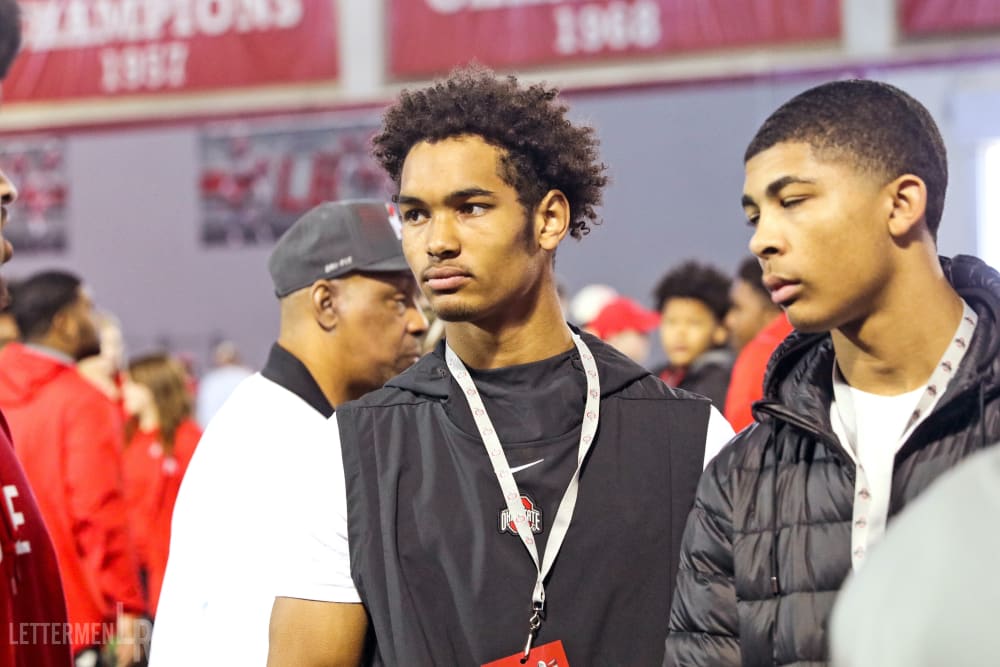 Emeka Egbuka is deciding between Ohio State, Clemson, Stanford and others. (Birm/Lettermen Row)

But the most important remaining player in the Class of 2021 is IMG Academy 5-star offensive tackle J.C. Latham. Thayer Munford will be gone following this upcoming season, and though it’s unlikely he leaves early barring a truly breakout season, Nicholas Petit-Frere is draft eligible next year as well. After that pair, there’s just Dawand Jones and Paris Johnson as pure tackles in Columbus. The rest of the offensive linemen on the roster are combination-type linemen, and outside of Johnson, no one has the upside and potential that Latham does — and he’s only played the position for one season of high school football.

The Buckeyes saw that potential earlier than anyone and for months have been considered the team to beat. But Alabama, LSU, Oklahoma and others aren’t going away without a fight. The game of football is won and lost in the trenches, and a future NFL offensive tackle is alwaysÂ a must. It’s easier to replace good receivers or good defensive linemen if one chooses elsewhere, that’s not the case for an offensive lineman of Latham’s caliber.