COLUMBUS â€” Ohio State was open for business on Wednesday and welcomed a couple hundred recruits for the first one-day recruiting camp of the year.

Heading into the morning,Â Lettermen Row had a handful of things we wanted to watch. As usually happens in these events, we left talking about a number of other things as well. Ohio State extended five new offers and left a number of big-time prospects hoping to hear from them about their own potential offer in the near future.

Here’s what captured our attention at the Buckeyes first recruiting camp in two years.

One of the best things about recruiting camps is how unheralded recruits can show up, show out and quickly go from unknown to well known.

That happened Wednesday with Merrillville (Ind.) 3-star defensive tackle Kenneth Grant. Grant caught everyone’s attention with his size — he checked in at 6-foot-5 and 350-pounds — and then backed it up with his unexpected athleticism. He ran a 5.14 in the 40-yard-dash and was quick off the ball in one-on-one competition drills.

Kids of this size don’t usually move the way Grant did. One coach working with him called him “special” in an off-the-cuff conversation. Larry Johnson’s eyes lit up when the massive 2022 prospect ripped off his first 40-time.

Grant came into the day with offers from 10 schools, including Cincinnati, Arizona State, Michigan and Nebraska. He left it with an offer from Ohio State. His recruitment will get interesting from here.

“Coach Johnson was on point,” Miller told Lettermen Row following the camp. “We were in the back watching my film, and he just saw everything I did right, everything I did wrong. He saw it all.”

The 4-star defensive lineman is still sorting out his recruiting calendar for June, but he’s been in Columbus since Sunday and will leave on Friday morning. From there, he’ll head to Georgia and USC and perhaps Louisville or Oklahoma before returning to Ohio State for his official visit on June 25.

Miller didn’tÂ haveÂ to come visit and workout for Larry Johnson this week, but wanted to.

“I just knew I had to get up here and get the work in with Coach J,” he said. “I can’t wait to come back here. He told me he was really impressed by how hard I was working.”

Georgia and USC remain the biggest threats to Ohio State. But the relationship between Johnson and Miller is a real one. It doesn’t hurt that the Buckeyes offered another Cedar Grove (Ellenwood, Ga.) standout on Wednesday: 2023 cornerback Kayin Lee.

Ohio State offered a pair of 2023 quarterbacks who camped on Wednesday. California’s Nico Iamalaeva and Louisiana’s Eli Holstein each camped and performed well before landing scholarship offers from Ryan Day and Corey Dennis.

Both Iamalaeva and Holstein are ranked as top-10 quarterbacks in the 2023 recruiting class and will spend the next month visiting schools all over the country. The Buckeyes are going to host a number of young quarterbacks in June.

The point? Two new offers to 2023 quarterbacks doesn’t mean the Buckeyes are narrowing in on their choice. It just means that they’re getting started recruiting the position for the next cycle. These visits are as much about finding out whoÂ can’t be the 2023 quarterback as who will be. Wednesday was a good day for both Holstein and Iamalaeva, but they weren’t alone. Tennessee’s Chris Parsons was really good, so too was Malachi Singleton from Georgia, who ran a 4.5 in the 40-yard dash. One coach at the camp toldÂ Lettermen Row that Parsons reminded him of J.T. Barrett, and he was a player who really impressed C.J. Stroud, who was in attendance and working with the quarterbacks.

It’s going to be a fun month. And if the rest of the campers in June come out firing like the group did on Wednesday, the Buckeyes will have a number of very talented options. 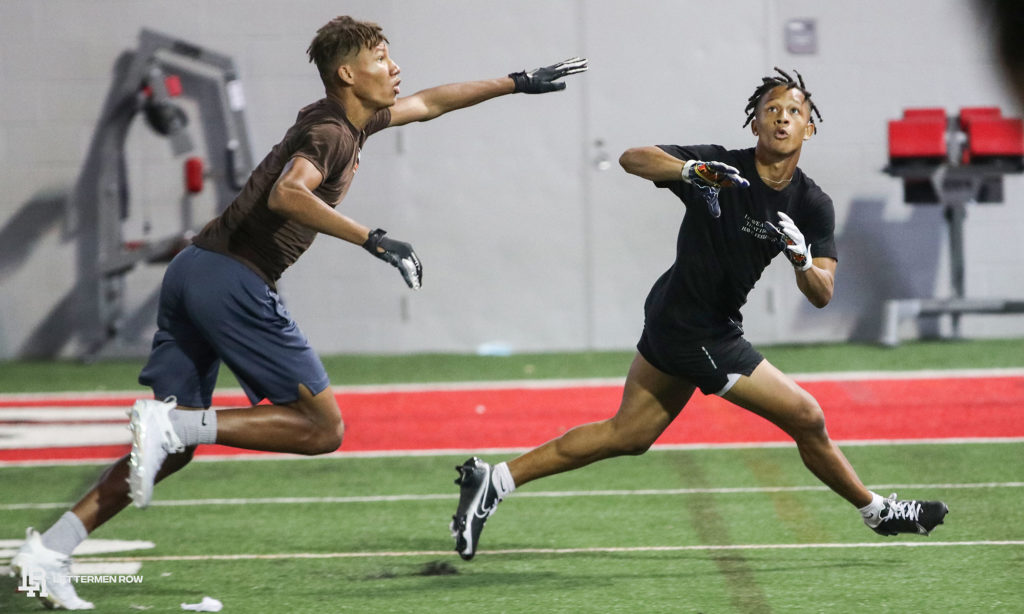 It’s been a while since Ohio State recruited a receiver like Springfield 2023 talent Anthony Brown. The 5-foot-10, 160-pound Brown has 12 offers and a lot of talent — he’s incredible in one-on-one situations and almost impossible to cover — but his size has kept the Buckeyes from making him an offer.

His performance on Wednesday could lead to that changing in the future. He will return to Columbus for a second camp at the end of the month.

“They said they really liked how I performed,” Brown told Lettermen Row. “They pulled me back in the office and wanted me to come back June 22 to catch punts.”

That request could shed some light on how Ohio’s No. 5-ranked sophomore could work his way into the Buckeyes 2023 class. He was attentive, coachable and worked closely with Brian Hartline on Wednesday afternoon.

“It was a surreal experience,” he said. “I can definitely tell that he recruits exactly what he wants.”

The next trip to Columbus could help Brown show that he’s one of those players.