COLUMBUS â€” The halfway point of a crazy, chaotic recruiting June for Ohio State has been reached.

There has been a new commitment in the Buckeyes top-ranked 2022 class. There have been three scholarship offers extended to 2023 quarterbacks who camped for Ohio State. Two 5-star running backs have publicly named the Buckeyes their recruiting frontrunner. For Ryan Day and his coaching staff, it’s been a mad rush of recruiting — and there are still two weeks left of it.

Let’s get into it.

After three years of not visiting Ohio State, Quinn Ewers has been in town twice already this month. The country’s top-ranked player in the Class of 2022, Ewers has begun connecting not only with Buckeyes commitments but with the coaching staff, cementing the bonds he’s built with that group over the last year-plus.

There are always going to be worries and concerns — that’s what recruiting does to people — but Ewers doesn’t seem to haveÂ any interest in other schools.

With Ewers locked in, there’s now been a full-speed ahead effort in recruiting 2023 quarterbacks. This isn’t going to be the kind of recruiting that Ryan Day and Corey Dennis have done in recent years. This is a widespread search for a player that A) Isn’t concerned about playing as a freshman; B) Understands he’ll need time to develop; and C) Isn’t afraid to compete against guys like Kyle McCord, Jack Miller and C.J. Stroud. Competition, after all, is what makes young players better.

Ohio State offered Eli Holstein, Nico Iamalaeva and Dylan Lonergan at the position in the last two weeks. There will likely to be others earning that chance, too. I am all aboard the Rickie Collins train, and he’ll camp in Columbus next week. The Baton Rouge (La.) standout now has an LSU offer, making his recruitment much more interesting. It seems LSU is coming to terms with the fact it is unlikely to land Arch Manning and is going to give chase to Louisiana’s other top-tier quarterbacks.Â  The Buckeyes liked a lot of things about Massachusetts quarterback William “Pop” Watson III, who camped two days last week, but his height could keep him from getting that call from the Buckeyes.

This summer is about eliminating prospects who don’t fit for the Buckeyes more than it is finding exactly who does. The 2023 quarterback chase will likely go on a bit. There’s a good chance it ends with an Ohio prospect — and that could be good news for young, developing talents like Anthony Wayne (Maumee) High School’s Cameron Swiger. 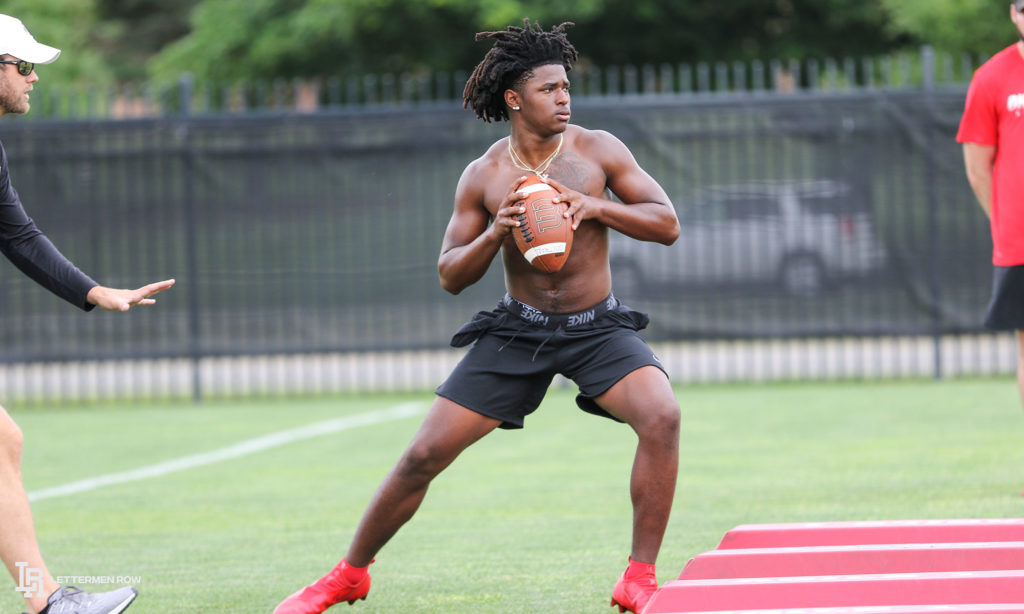 William “Pop” Watson III turned a lot of heads at Ohio State during his two-day visit in June. (Birm/Lettermen Row)

Running back recruiting will be wild ride for Tony Alford, Buckeyes

The next two weeks can really shape running back recruiting for Ohio State in the Class of 2022. The first two weeks of June set the table for a huge 2023 recruiting cycle for Tony Alford and the Buckeyes.

Top 2022 target Dallan Hayden makes his official visit this weekend. A decision from Hayden is expected sometime shortly thereafter, with Notre Dame trying to push Ohio State out the lead position. Omarion Hampton visits the Buckeyes the following week, and he’s a young player who really does have Ohio State’s attention. One way or another, there’s going to be clarity about the position afterward. Right now it seems likely that there will be just one tailback in the 2022 class, but with Hayden, Hampton and Gavin Sawchuk all in the mix, that one is going to be a good fit for the Buckeyes no matter who it is.

There had been some discussion about a second running back in 2022, but the way things went with 2023 stars Richard Young, Treyaun Webb and Justice Haynes in the last week, Ohio State may be better suited trying to land a pair in the next cycle. Alford and Ohio State hit three absolute home runs and are leading the way in each of those recruitments early. Young and Webb are very close and have talked at length about playing together in college. The Buckeyes signed two of the country’s top-five running backs in the 2021 class, and there’s no reason to think they couldn’t do it again in 2023. 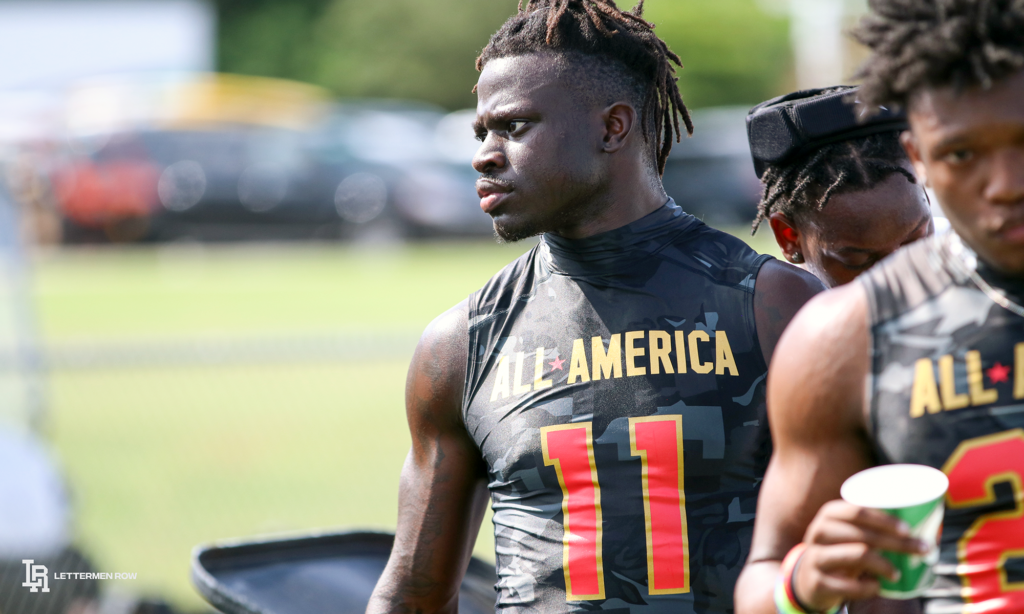 The country’s No. 1-ranked 2023 running back has Ohio State on top of his list. (Birm/Lettermen Row)

Ohio State is actively searching for fourth receiver in 2022 class

Brian Hartline has not slowed down at all for Ohio State. The Buckeyes have three receivers committed in 2022, and it’s clear they’d like another.

There was a weekend workout from Landon Samson, the top receiver target for Ewers at Southlake (Texas) Carroll. Joseph Griffin, a 4-star receiver committed to Boston College, was very impressive during his camp performance with the Buckeyes as well. Neither of those players has an offer yet, and there is a key official visit coming from Kojo Antwi. Antwi has been a priority for Hartline and Ohio State for a while now, so his visit provides a chance for the Buckeyes to get a temperature check and decide if they should really look elsewhere.

If that’s the case, new offers could follow quickly. 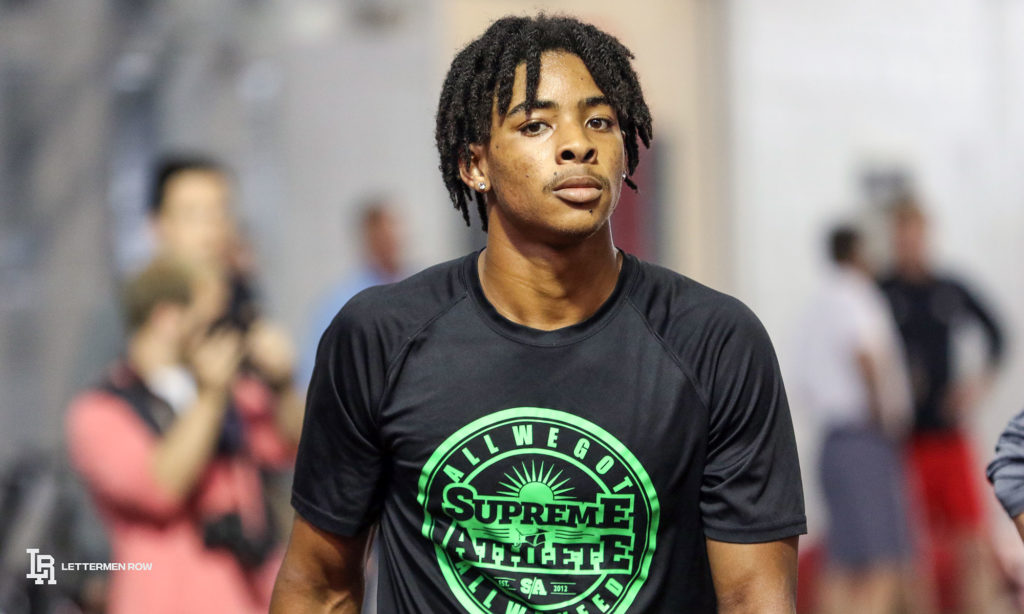 Boston College commit Joe Griffin did a lot of good things when he camped at Ohio State. (Birm/Lettermen Row)

Tegra Tshabola has been committed for more than a year.

He’s one part of what is only expected to be a three-man 2022 offensive line class for Ohio State, and that’s where things get very interesting. The Buckeyes have hosted Aamil Wagner, Jaylen Early, Joe Brunner, Carson Hinzman, Zach Rice and George Fitzpatrick for official visits already. Top-of-the-board targets like Addison Nichols, Billy Schrauth and Tyler Booker have official visits scheduled in the next week. California’s Earnest Greene will be in town for an unofficial visit this week, and Kam Dewberry will make an official visit at the end of the month.

Kiyaunta Goodwin is still trying to arrange a visit to Ohio State, at least superficially. In-state players like Carter Smith and Ryan Baer have worked out for the Buckeyes this month and impressed.

If the Buckeyes are only taking three, figuring out the right combination is going to be key. There are a couple of no-brainer type prospects out there, but the timing of decisions will be important. In an ideal world, Ohio State would have hosted all of their top targets early in the month rather than having them spread out. Either way, Greg Studrawa has to on top of his game if the Buckeyes are going to make the splash they need to.

The real intrigue is coming with Nichols, Booker, Dewberry and Greene all on campus in the next two weeks. It’d be very hard for Ohio State to say no to any of those players. 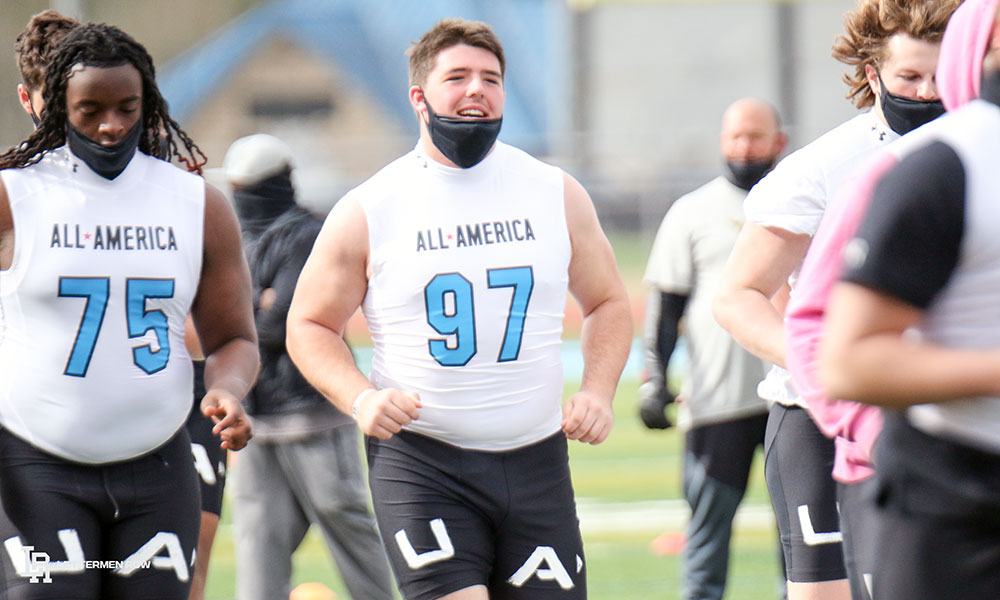 Omari Abor is the top name on the board for Ohio State, but the 5-star defensive end from Texas has company. Kenyatta Jackson is coming into town for an official visit on June 25. Florida 5-star standout Shemar Stewart visited unofficially and camped with the Buckeyes last week. Enai White will make an official visit to Columbus.

Larry Johnson has no shortage of options. But are the Buckeyes close to landing any of those premier edge rushers? For the 2022 class to remain at the top of the national rankings, it’s going to need a big push from Johnson’s group. There’s discussion that this could be a five-man defensive line class — and right now there’s Abor, Caden Curry, Hero Kanu, Christen Miller and Chris McClellan leading the way.

What if any of those guys end up elsewhere? Where does Ohio State turn? Can last week’s visit from Stewart turn into an official visit in the fall? He’s likely to end up staying in the south, but there’s a good relationship between Ohio State and his coach Mario Perez. Ernest “RJ” Cooper from Texas made an official visit as well, and he’s got big-time upside. The Buckeyes also impressed him in a major way.

Wilfredo Aybar, an intriguing defensive end from Connecticut, checked out the Buckeyes last weekend as well. There’s a lot to sift through, but landing a pair of big-time edge talents could be the difference between the No. 1-ranked class and the No. 3-ranked class.

Oh, and J.T. Tuimoloau is making his official visit with the Buckeyes this weekend. That’s going to be fun, right? 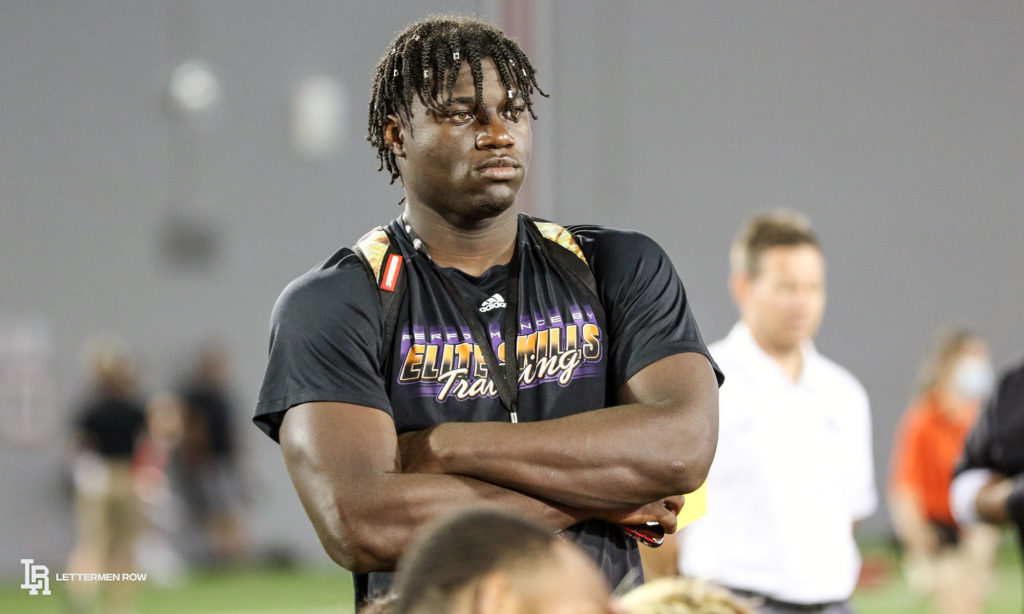 Shemar Stewart is as good a defensive line prospect as there is in America. (Birm/Lettermen Row)

It’s been a quiet month so far for linebackers coach Al Washington, but things are heating up now.

Top-of-the-board prospect Jihaad Campbell, who had pretty much stopped talking to Ohio State for a while, reconnected. Campbell made an official visit with the Buckeyes last weekend, and they believe they’reÂ back in the game for his eventual commitment. If that were to happen, then linebacker recruiting would absolutely be wrapped up in 2022. Campbell’s recruitment could make things very interesting for players like Michigan State commitment Malik Spencer.

Spencer, who plays at Buford (Ga.) High School, will make an official visit to Ohio State over the June 25 weekend — but doesn’t have an offer yet. Hilton Head (S.C.) 4-star Jaylen Sneed is also an interesting player to consider for the Buckeyes. Ohio State hasn’t pulled the trigger on an offer as Notre Dame, Oregon, and Tennessee have emerged as top contenders for the 6-foot-2, 210-pound linebacker. Sneed has been a star on the recruiting camp circuit all spring.

In a dream world, Ohio State would get a chance to host Georgia commitment Jalon Walker for a visit. He’s long been the top choice to complement C.J. Hicks and Gabe Powers. Maybe he’ll decide he committed too soon and make visits? Ohio State and Clemson would both love that. 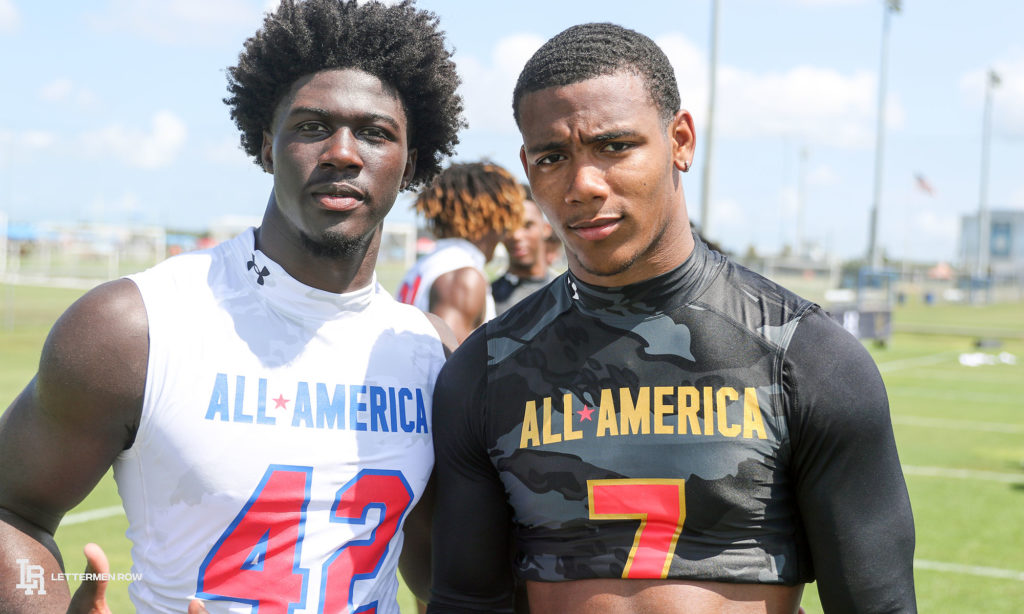 Jalon Walker and C.J. Hicks are among the nation’s best recruits. (Birm/Lettermen Row)

Two of them may be making a college decision this week, and neither are expected to pick Ohio State. Though it’s likely good news for Clemson that Toriano Pride and Sherrod Covil are rumored to be shutting down their recruitments, it’s also important for the Buckeyes because they know now who isÂ out and can focus entirely on the guys that could still beÂ in.

The biggest focus right now, though, is Jaheim Singletary. Yes, he’s committed to Ohio State. But he’s going to make official visits elsewhere, and he’s not someone who could be easily replaced in the Class of 2022. Ohio State has three cornerbacks committed and one safety in the fold, and it remains a top contender for Xavier Nwankpa and Zion Branch. Jake Pope, a teammate of Malik Spencer’s at Buford, will officially visit this weekend. Denton (Texas) Ryan 4-star Austin Jordan and California’s Ephesians Prysock visited last weekend. Expect Prysock to remain very much in the mix moving forward, but I do think Jordan will stay closer to Dallas for college. Florida’s Markeith Williams and New Jersey’s Jayden Bellamy will visit the weekend of June 25.

That’s the weekend Singletary will visit as well. He, along with Branch and Nwankpa, hold the key to Ohio State secondary recruiting in 2022.

For Ohio State and the 2023 class, there is a key visit this week as well: Phenix City (Ala.) 5-star A.J. Harris will be on campus. He’s been a sleeper pick for me as the Buckeyes first 2023 commitment. He had a very good visit to Clemson last week, and that may have slowed things down a bit. But he’s priority No. 1 at cornerback in 2023 for Kerry Coombs and the Buckeyes. He’s at the very top of the 2023 defensive board alongside Georgia safety Caleb Downs and Ohio must-get Sonny Styles. Styles camped once with the Buckeyes already and will be back to work with Coombs, Al Washington and Larry Johnson again this week.