Buckeyes prepared for 'extraordinary' month of June on recruiting trail
Aritcle written by:

COLUMBUS â€” Mark, get ready. Get set. It’s a go for Ohio State.

Recruiting is almost all the way back, and when the 16-month-long dead period ends on Monday night, things are going to get a bit weird for Buckeyes recruiting ace Mark Pantoni. The next four weeks will test the mental and physical limits of everyone tasked with Ohio State’s June recruiting blitz. It’s all hands on deck with hundreds of unofficial visitors coming to town, more than 50 official visits scheduled and thousands of young players heading to Columbus for one-day camps.

It’s going to be unlike anything Pantoni, the Buckeyes recruiting leader and director of player personnel, has ever seen.

“For one month, it’s very overwhelming,” Pantoni said Friday morning. “In a normal year, [we] probably get in the high 40s to low 50s [official visitors.] So this is this is pretty extraordinary.

“We’re just trying to take it day by day right now. But starting next Tuesday, it’s on.”

Every recruiting visit is important for prospective college football players. This year, after sitting idly by for so long, the first visit takes on added weight. There’s a sense that in most cases for kids from different parts of the country, this is the only crack at them Pantoni’s recruiting team will have. There can’t be an off-day, literally or figuratively.

For kids and coaches who haven’t seen each other in person, the chance to shake hands and meet without requiring technology is huge. For Ohio State and Pantoni specifically, it’s a chance to see what his own brand-new staff is capable of.

The last year-and-a-half has brought big changes to the Buckeyes recruiting department. Tori Magers, who had worked alongside Pantoni the last handful of years, moved on last year. Pantoni had plenty of time to find her replacement because of Covid-19, and now he’ll see if his choice was the right one. All indications are that Erin Dunston, who takes over as the Buckeyes director of on-campus recruiting, is warming up to the role nicely.

“We just have to be very organized, and Erin’s been a rock star,” Pantoni said. “She’s been great. We haven’t lost a step with her. Erin and I are just working closely together.”

Every job at Ohio State is a pressure-packed proposition, so it means something that Dunston chose the job after leaving Kansas. 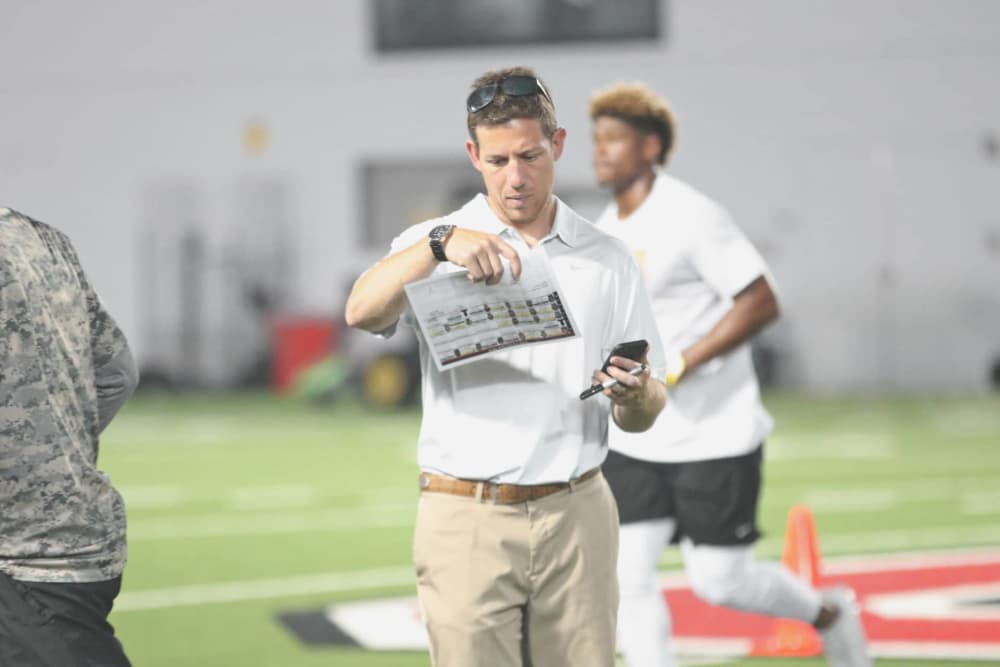 Camp season means sorting through a lot of names for Mark Pantoni but this year will be more than ever. (Birm/Lettermen Row)

“I think my personality and my organizational skills, my experience is what is going to allow me to help elevate Ohio State in the recruiting aspect.”Â

In a month like the one that’s coming, everyone needs to be a rockstar. The best foot has to be forward.

“I’ve brought it up to our coaches,” Pantoni said. “It’s kind of like we’re putting all our chips in right now in the month of June. A lot of these guys we may never get back [on campus] before the December signing period. That’s a long time to go, so that impression may lose a lot of its luster. A lot of the top guys we’re going after right now, these next four weeks, are going to be taking visits every weekend. For a top guy who may be visiting this first weekend, and then going on three more trips after, is that feeling of Ohio State still going to last?

The numbers are potentially overwhelming. The challenge is making sure no key visitor is left behind because coaches are stretched too thin. In order to do that, the visit plans have been structured strategically.

“What we’ve tried to encourage is to get the 2023 [prospects] on campus during the week so we don’t lose focus and attention on them,” Pantoni said. “A lot of those kids are going to come during the week, come for camps, to where we’ll have a great plan for them. … We’ll show them a great visit.”

After waiting more than a year, Pantoni knows he won’t sleep much for the next month.

“In the month of July, that phone is probably gonna be turned off,” Pantoni joked. No one is gonna track me down.”

Until the last week of July, of course. That’s when recruiting will get back to work … again.