Have a question about Ohio State recruiting? This is the place for you. Check-in daily to see what’s on the mind of Buckeyes fans all over the country. Today’s question is about Ohio State offensive line target Luke Montgomery.

The month of June is a crazy month in a normal recruiting year. The insanity was amplified in a major way this year.

No one exemplifies the chaos better than Findlay 2023 athlete Luke Montgomery. The 6-foot-5, 255-pound, 4-star prospect was all over the country, visiting a number of the nation’s biggest football programs. Here is the schedule Montgomery completed and the visits he made: Ohio State (twice,) Michigan, Tennessee, Georgia, Auburn, Alabama, Clemson, Oklahoma and Notre Dame.

That’s a lot of miles and little sleep for a player who has become a top national prospect seemingly overnight. Montgomery’s recruitment is going to be intriguing one for a number of reasons, least of which is his athletic frame that has offensive line coaches believing he’s a potential first-round NFL Draft pick and defensive line coaches wondering what he could become if he focused solely on hitting people. A truly gifted two-sport athlete — Montgomery probably prefers basketball — he’s got some big decisions to make that go beyond the basic question of: Where do I want to go to school?

He has to be 100-percent sold on what position he wants to play. And he has to be ready to dive into it, full-speed ahead. 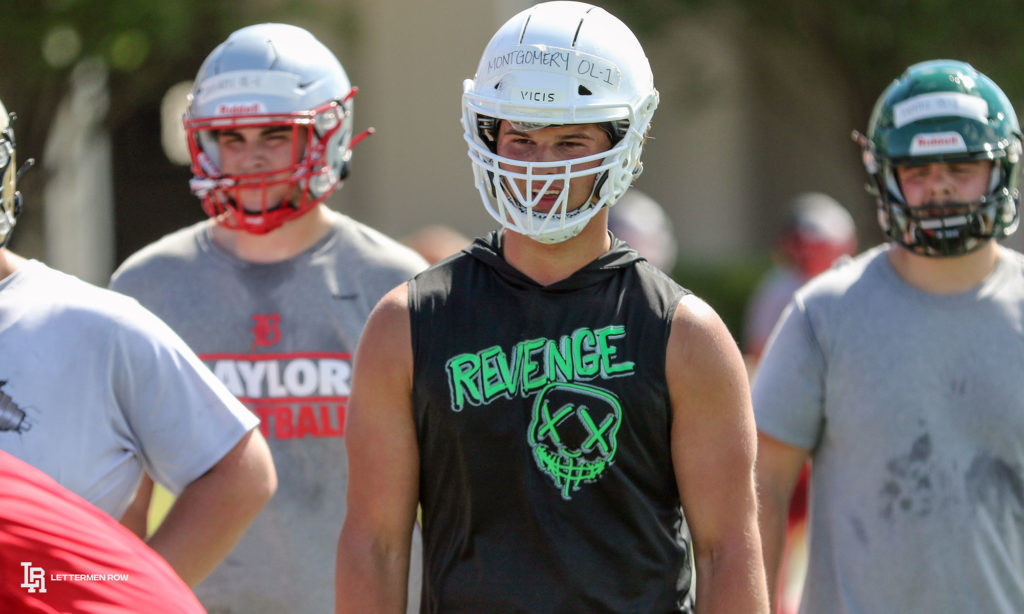 Luke Montgomery saw a large number of the country’s top programs in a very busy month of June. (Birm/Lettermen Row)

Being committed to something isn’t going to be a problem for Ohio’s No. 3-ranked 2023 prospect. He’s always been willing to put in the work to get where he wants to be.

June no doubt helped shed some light on exactly where that is. The Buckeyes have been the long-supposed leader in his recruitment, but it’s hardly a slam dunk. Notre Dame is a real, viable threat — and so are Clemson, Oklahoma, Georgia and Penn State. Montgomery wants to make return visits to each of those schools at some point this fall.

He’s in a position to do that. And if those trips all happen, a decision could come after that, likely toward the end of November. But there’s no hurry. The only thing that matters for kids like Luke Montgomery is making the right choice, not the hurried one. It’s obviously important for Ohio State that he pick the Buckeyes, especially after one of his friends — Brenan Vernon — already picked Notre Dame two weeks ago. It’s not just a matter of not wanting to lose another player to the Fighting Irish, though.

Montgomery has huge upside on the field. He’s also a natural leader off of it and wants to be a class leader for whatever school he picks.

“I want to be able to go in and make a huge impact out of the gate,” Montgomery said in February. “Wherever I end up going, I’m going to be recruiting the heck out of kids all over the country.

“I want to win national championships, and I’m a pretty social kid. Whatever school I pick — and I’m not going to make any kind of decision until after my junior season —  I will definitely be a recruiter for the school I pick.”

Ohio State is hoping that it’s the choice. I tend to believe the Buckeyes will win this battle, but they’re going to have to earn it. Recruiting has changed, and it’s not enough anymore to just assume every Ohio kid will pick Ohio State just because. There has to be a plan for his future and a clear path to making him the best version of himself on and off the field.

June helped Luke Montgomery sort out some key parts of his recruitment. Now he’ll focus on his junior season to decide exactly where his football future is.