Wednesday was sure stress-free for the Buckeyes, though, as they signed 21 young men to join their program — a haul that for now has Ohio State ranked as the country’s second-best recruiting class. The cycle didn’t include much drama for Ryan Day and his recruiting staff, which comes as a result of recruiting the right kids for the program.

â€œBefore we even take a kid’s commitment, we want to make sure they’re a great culture fit,” Ohio State director of player personnel Mark PantoniÂ said. “We donâ€™t want to deal with a lot of games being played, like a kid says he commits and then a couple weeks later he wants to go visit other schools. We try to eliminate that early on and make them understand what a commitment here means. It just shows the quality of kids weâ€™re recruiting.

“There’s not a lot of drama. It was an easy day and pretty much the whole cycle was almost drama-less. Our coaches did a great job having these kids understand what it meant to be committed and helping recruit.”

The work isn’t done for the Buckeyes coaches, though. The early signing period is wrapped up, but the February signing day is just about seven weeks away now. For Ohio State, there are a few remaining questions. More importantly, there’s still some recruiting work to be done by Wednesday’s signees.

What’s left for the Buckeyes in 2021? Lettermen Row has three looming questions for Ohio State.

The last time that Ohio State had to wait for the country’s top-ranked player beyond signing day was in 2008. That turned out well for the Buckeyes, who received a commitment from 5-star quarterback Terrelle Pryor in mid-March of that year. In 2021, the odds are pretty high the wait for 5-star defensive tackle J.T. Tuimoloau goes atÂ least that long — and probably longer as the 6-foot-5, 290-pound, No. 1-ranked overall prospect waits for a chance to take official visits. That can’t happen until the middle of April.

What he’s no longer waiting for is the right day to announce his final five schools, because that happened on Wednesday. Ohio State, Alabama, Oregon, USC and Washington are the schools that made the cut, and the Buckeyes continue to be regarded as one of the favorites to land him. There’s not a lot of room remaining in the Class of 2021, but J.T. Tuimoloau will have a spot no matter how long it takes for him to decide even though Pantoni played somewhat coy about the notion of adding anyone else in this cycle.

“We’re going to see after the season here if we have any attrition,” Pantoni said. “If we need a plug … if there’s great players out there that are culture fits and they fit a need, we’re definitely going to look into different options.”

The first and last option for adding any additional players in the Class of 2021 is J.T. Tuimoloau. Ohio State will pursue him all the way to next June if that’s what it takes. 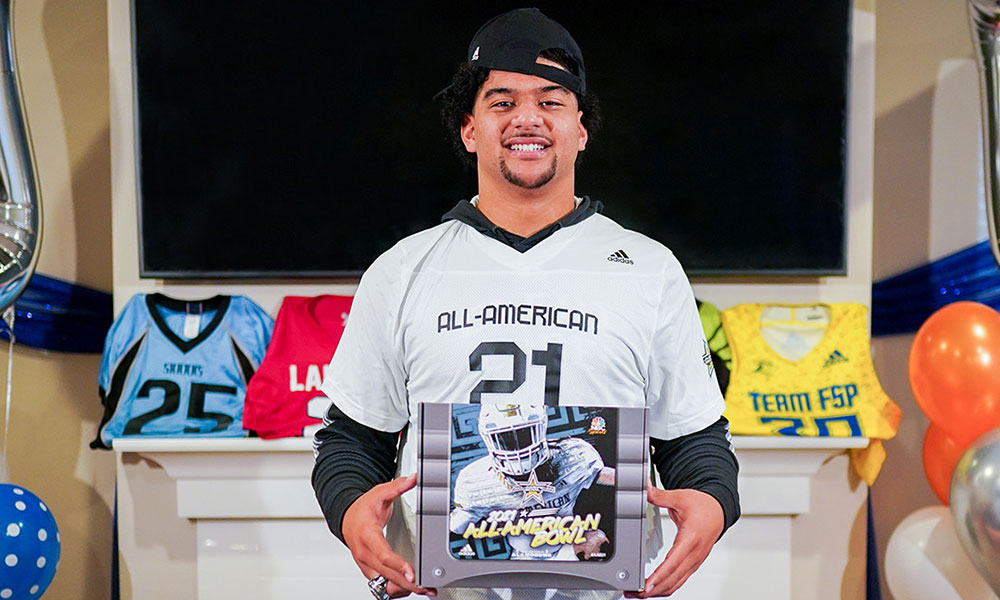 J.T. Tuimoloau will be a dominant player wherever he ends up playing in college. (All-American Bowl/Courtesy)

Ryan Day was pleased with the Buckeyes additions on the offensive line, and there’s plenty of reason to believe him. Ohio State signed three athletic, versatile linemen — including the top-ranked interior lineman in the country in Donovan Jackson — but fell short to this point of landing a surefire, top-tier offensive tackle, at least according to the national rankings.

“I think [offensive line coach Greg Studrawa] worked his tail off,” Day said. “I think we got three really good players, all very different — three really talented young men. I’d give it an ‘A.'”

Ohio State was out in front for 5-star offensive tackle J.C. Latham for six-plus months but lost traction in his recruitment after the spring dead periods unfolded and he signed with Alabama. When Latham moved on, the Buckeyes turned attention pretty exclusively to 5-star Tristan Leigh, who has been receptive to their conversation. But he has not returned to campus in Columbus in the last year despite multiple visits to LSU, Oklahoma and a trip last weekend to Florida.

Leigh was expected to sign with a college this week before announcing his decision on Jan. 2. He decided against signing, butÂ still intends to announce his school of choice in two weeks with a plan to sign in February. That means there is at least potentially a chance for Ohio State to get him on campus in the month of January. But if he does, then he’d be making the visit as a player committed somewhere else.

There’s been little optimism on the Tristan Leigh front for Ohio State, but at the very least there’s been a stay of execution in his recruitment. Expect Greg Studrawa, Ryan Day and the rest of the Buckeyes to make an appeal in whatever way they can. If Ohio State can’t convince Leigh, it would not be a surprise to see the Buckeyes get active in the transfer portal for an offensive tackle. 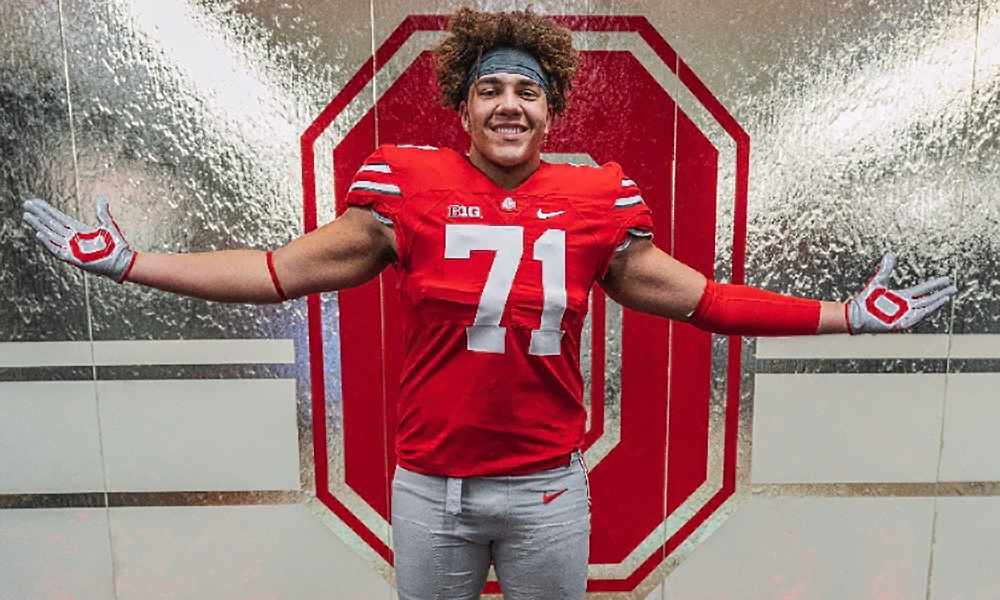 Getting Tristan Leigh back on campus for a visit has been very challenging for Ohio State. (Tristan Leigh/Courtesy)

Will the Buckeyes be able to sway Raesjon Davis from LSU?

Ohio State signed just one linebacker in the Class of 2021, but it is still working hard to add another. Linebackers coach Al Washington has been diligent in his pursuit of LSU commit Raesjon Davis since March, and the 4-star prospect has been listening. Davis changed his enrollment plans and adjusted his signing plans as well, choosing not to sign this week and to wait until February instead.

That gives a little bit of time for Ohio State to convince Davis and his family that the better move for his future is to choose Ohio State over LSU, which has been struggling with off-field issues and on the field, especially on defense under new coordinator Bo Pelini. The Buckeyes need to get Davis and his family on campus, and they would’ve done that over the Dec. 12 weekend if the Ohio State home game with Michigan hadn’t been cancelled. Without the backdrop of a game, even though he wouldn’t have been able to attend, the family decided against it.

The country’s No. 4-ranked outside linebacker would be a perfect complement to Reid Carrico and a solid addition for the Buckeyes, who are set to lose Tuf Borland, Pete Werner, Baron Browning and Justin Hilliard from their current roster.

USC is also very much in the mix for Davis, and if the talented youngster were to stick with LSU or pick the Trojans over the Buckeyes, there’s a chance they could pursue former USC linebacker Palaie Gaoeteote, who has recently entered the transfer portal.Â  He was the No. 1-ranked inside linebacker in the Class of 2018.

It may be a long-shot for Ryan Day’s program to knock off Alabama and become the 2021 recruiting champions. But any chance that Ohio State has is tied to these three prospects.