Have a question about Ohio State recruiting? This is the place for you. Check-in daily to see what’s on the mind of Buckeyes fans all over the country. Today’s question is about how well Ohio State has addressed its biggest 2022 needs on the recruiting trail.

Biggest areas of concerns for 2022 and 2023 based on depth chart? I always lean on O Line especially the Coombs getting the DBs back in line.

Coming into the Class of 2022, there were a couple obvious needs for the Buckeyes to fill.

It doesn’t take much roster examination to see a glaring need coming down the pike at offensive tackle. That’s not to say there aren’t players on the current roster capable of playing the position. Rather it’s more of an admission that following the departure of Thayer Munford and Nicholas Petit-Frere after the upcoming season, there’s a whole lot of inexperience and only a coupleÂ true tackle bodies in Columbus. Those concerns grow exponentially when assuming that Paris Johnson’s Ohio State career is likely to wrap up after three seasons.

At this point, George Fitzpatrick is the lone tackle commitment in the Class of 2022. Tegra Tshabola can play the position, but the more he’s evaluated, the more it appears he will be a guard at the next level. Tshabola is a huge, big-bodied athlete very much in the same mold as Earnest Greene, Addison Nichols and Kam Dewberry. I believe Greene and Dewberry land in the Buckeyes class at this point, but true tackles like Aamil Wagner and Billy Schrauth remain options as well.

Still, missing out on a guy like Kiyaunta Goodwin hurts. Kids like that don’t often grow up in the Ohio State recruiting footprint. Not landing him seemed to throw the entire offensive line plan for a loop.Â Though Goodwin is committed to Kentucky, Ohio State absolutely should continue working to flip him in my opinion. He’sÂ that talented and the need for the Buckeyes isÂ that great.

Ohio State also has an unresolved need on the defensive line. It’s a position that probably needs five signees, and right now there’s not a single commit. That’s not ideal. WhatÂ is ideal is having Larry Johnson on the job after a busy month of June that saw all of his top targets on campus. Ohio State has put itself in a great position for Caden Curry, Hero Kanu, Kenneth Grant, Chris McClellan, Enai White, Omari Abor, Kenyatta Jackson, Shemar Stewart and a host of others. It’s hard to ever envision a recruiting cycle where Larry Johnson doesn’t earn his money. The Buckeyes will be fine on the defensive line, no doubt about it. 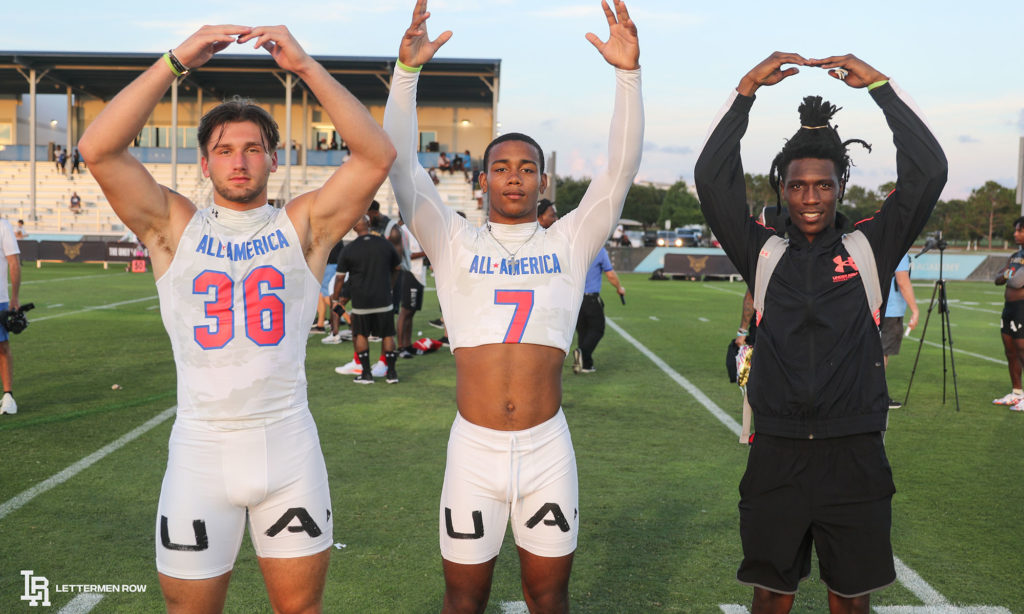 Al Washington lost four linebackers after last season and he picked up early commitments from three of the country’s best 2022 talents. C.J. Hicks and Gabe Powers are sure-fire contributors down the line. But the decommitment of Dasan McCullough has left some interesting decisions at the position now. Are the two remaining verbals good enough to skip another addition? That’s a big question with three senior linebackers set to leave after this season. The Buckeyes will need to get quality playing time and experience for their young guys to feel confident about that.

There are a lot of questions about the defensive backfield, too. Kerry Coombs and Matt Barnes are trying to signÂ seven in the secondary and have five commitments now, including four cornerbacks. The biggest remaining fish are Xavier Nwankpa and Zion Branch, and they have been top-of-the-board priorities for a long time. Even if the math might seem surprising from the outside, there must be a good reason that Ohio State wants so many defensive backs.

So, for the most part, 2022 has been a success to this point. The Buckeyes have the country’s No. 1-ranked recruiting class, after all. But theÂ finish is what matters from here. Ohio State needs to hold on to its current crop of commitments and not miss on many of the top targets left. This year’s offensive line class isn’t spectacularly deep, so going too far down the list isn’t ideal. Larry Johnson doesn’t have a deep list to choose from along the defensive line, either.

We’ll dive into what I see as the biggest needs in the 2023 class on Thursday.