COLUMBUS — The early signing period isn’t over for everyone, but it’s over for Ohio State.

On Wednesday, the Buckeyes signed 14 prospects in the Class of 2019. It’s been a wild few months, and the early signing period helped cap some of that madness — but it also serves as a reminder that there’s more to come.

I’ve got a couple of thoughts about signing day and the new Ohio State class, so I’m just going to let them fly.

That group currently ranks as the Big Ten’s third-best and the 12th-ranked class nationally,Â according to theÂ 247Sports.com composite rankings.Â  Ohio State’s class ranks one spot ahead of Notre Dame, which signed five more players than they did on Wednesday. In fact, no program in the top 35 of the team rankings signed fewer players than Ohio State.

Lamenting the current standing for the Buckeyes? It’s recommended to consider viewing it from a different angle. Here’s one to consider.

For everyone saying this is a down recruiting class for #OhioState, it's just low on numbers. #Buckeyes have the third-highest rating per commit in the country so far in 2019 headlined by three five-stars. Pound for pound one of the nation's best hauls: https://t.co/vYHvIpM5CK

How many other programs in the country could sign a class that consisted of 20-percent 5-star prospects after what Ohio State has dealt with since August and, more specifically, since Urban Meyer retired two weeks ago? I’d venture not many.Â  I’m not trying to put makeup on a pig here, either.

This is a good, solid recruiting class in a year that the Buckeyes showed their program’s strength not by who they signed, but who they held on to in the face of considerable adversity.

It was about three weeks ago when things really started to turn in Ohio State’s favor for 5-star defensive tackle Zach Harrison. Whether it was the 62-39 win over Michigan, the continued relationship being built with Larry Johnson, the transition from Urban Meyer’s in-your-face personality to Ryan Day’s more laid-back approach or just about not wanting to leave home doesn’t matter.

What matters is that he’s signed with to the Buckeyes after months of turbulence and uncertainty.

Harrison’s choice has been seen by some as more proof that Ohio State will continue its dominance over Michigan on the football field, but it really isn’t linked to that at all. He liked Michigan a lot, and that is clear. He felt comfortable there, and the recruitment could have truly gone either way.

What his choice shows most of all is that the Buckeyes program built by Meyer is still one that is the envy of college football. There’s no reason for Ohio State fans to panic about the people entrusted to maintain it. Ryan Day is capable, and he showed that in just about two weeks with the single biggest recruit on the board for the Buckeyes in 2019. Day has a unique ability to quickly bond with young people and their parents.

“Larry Johnson has been recruiting Zach for a long, long time,” Day said. “Obviously Urban had a big part of this thing, and it’s been a long time coming. We had a home visit last week. It was really important to sit down in the home and talk to the family about the direction of the program, and having some communication just on some of the leadership changes obviously that comes with the change in the head coach, and that communication stayed all the way until last night.

“And so it was kind of down to the wire, but couldn’t be more excited to have him part of this family, a special young man that’s going to do great things, and he’s going to have a lot of help along the way to do it with him.”

Michigan signed a tremendous class and things are honestly looking up in Ann Arbor as well. Losing Harrison isn’t going to stop that. It does reiterate though that just because Meyer is gone, there’s no guarantee the Buckeyes are looking to just hand over the throne.

When Meyer announced his retirement on Dec. 4, Day and the Ohio State coaching staff had 15 commitments and 14 days to lock up the class that was in place — and try to lock in a few uncommitted kids they’ve been recruiting hard for months. There were ups and downs as expected, because no program could lose somebody of Meyer’s caliber withoutÂ some repercussions.

According to Day, the kids that came out and immediately reaffirmed their commitment to the Ohio State program are going to be remembered very fondly down the road, even if they never make an impression on the field.

“The kids that we have, we love,” Day said Wednesday. “We love these kids. We think the quality of the guys that we’ve signed here is excellent. So we wanted to keep them all. And so that was really important for us. But when you look at who these kids are in the last seven months and their loyalty, it’s amazing.

“You know what happened in August, and then there’s a coaching change here down the stretch. These kids stuck with us, that means a lot to us, and we’re not going to forget that moving forward.”

These aren’t just good football players Day is referencing, either. Three of the signees — Zach Harrison, Harry Miller and Garrett Wilson — are among the six players selected by the All-American Bowl as Man of the Year finalists for their efforts on and off the field.

Meyer was fond of saying “the future is bright at Ohio State,” and it doesn’t look like that’s changing anytime soon. But for Day and the Buckeyes, this was a family effort. That speaks volumes about how well regarded he is by the families that he has gotten to know over the last year-plus.

“Some of the families like the Wilsons and the Millers and some of the families that I was close with early on in the recruiting process that were kind of my own personal recruits,” Day said. “I think they communicated with the other parents to say, ‘hHey, this is our experience with Ryan and this is what you can expect.’

“They had a big part of this. But there was a lot of people that were involved in it. You know, we have some great families in this past weekend, the Jacobys, the Potters, great people from Ohio, the Stover families. Being able to go through and sit in everyone’s house and get a feel for who these people are, it’s been a really great experience.”

We wrote here last Friday that the Buckeyes were going to lose Florida defensive back Jordan Battle to Alabama.Â It happened and wasn’t a surprise, obviously, despite it being a major disappointment. Battle is a reallyÂ good player that the Buckeyes really wanted, but he’s a young guy that just wanted to play for Meyer and not Ohio State. That’s cool, it happens.

Dwan Mathis flipped to Georgia, and that felt more unsettling because of the last-minute nature of the entire decision. But this was falling apart from the minute he found out he’d not be able to enroll early with Ohio State as planned. Georgia obviously believes they can get him early, and if they can, it’s a good fit for both parties. If they can’t and it was just a bill of goods being sold to force a decision, it’ll be pretty disappointing.

Either way, if the Buckeyes can somehow convince Justin Fields to pick them as he considers his transfer options, it will not matter one bit to the Ohio State coaches. That’s a trade it will make 100 times out of 100.

Ohio State is absolutely going to add another quarterback to its roster between now and signing day in February, so be prepared for a lot of speculation here in the next few weeks. 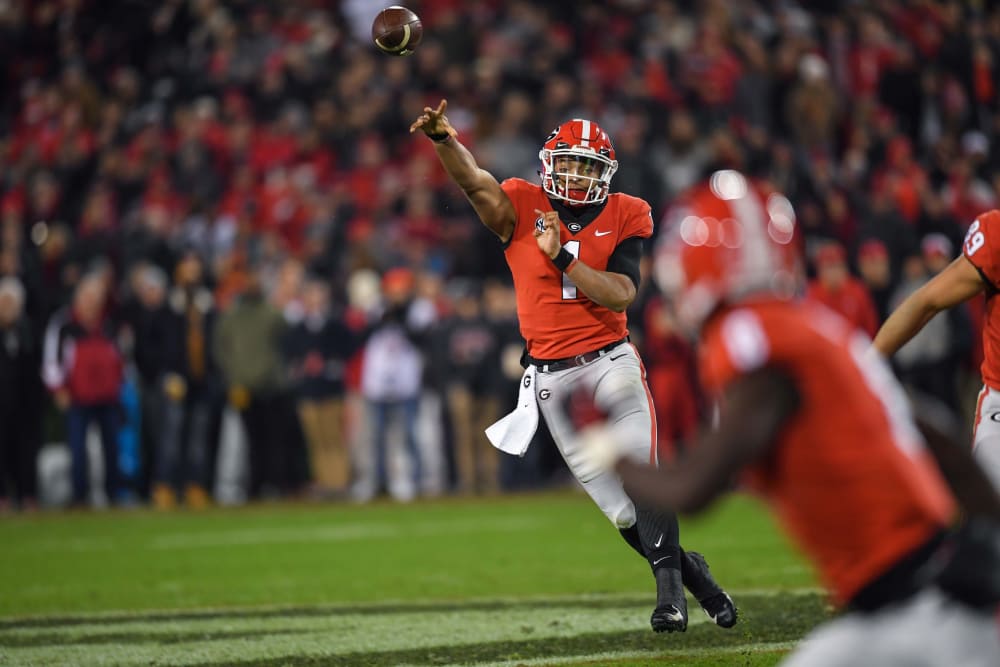 Georgia quarterback Justin Fields could be an option for Ohio State on the transfer market. (Dale Zanine/USA TODAY Sports)

Work left to be done for Ohio State

In the last two recruiting cycles, the program has offered five different in-state offensive linemen who have decided to play somewhere other than Ohio State. In that same time, the Buckeyes have signed only five total linemen. With three guaranteed starters leaving in 2019 and maybe a fourth if Michael Jordan declares for the NFL Draft, the depth issues that Meyer mentioned all year at that position are becoming even harder to ignore.

On Wednesday, the Buckeyes signed only two offensive linemen, and though Doug Nester remains committed to Ohio State, the hold on him is getting precarious as Georgia, Penn State and Virginia Tech all have official visits with the longtime commitment looming.

Day and the recruiting staff know there is an issue and that something is going to have to change.

“It’s something that for sure I’m well aware of,” Day said. “It’s an area that we’ve got to do a better job at.”

That’s an understated response to what could be a major issue for Ohio State. Securing Nester and finding another offensive lineman or two that fit the program will be paramount in January after failing to flip Nick Broeker from Ole Miss and J.D. Duplain from Michigan State.