The speculation, debate and conversations about Ohio State never end, and Lettermen Row is always ready to dive into the discussions. All week long, senior writer Austin Ward will field topics on Urban Meyer and the Buckeyes submitted by readers and break down anything that’s on the minds of the Best Damn Fans in the Land. Have a question that needs to be tackled, like the one today about Mike Weber andÂ the running backs? Send it in right here — and check back daily for the answers.

What do you think his draft grade is? If he wants to go I hope it’s the first couple rounds

Ohio State certainly wasn’t surprised on Sunday night when Mike Weber hit send on his draft-declaring post on social media. In fact, the Buckeyes were actually prepared for him to do it a year ago and wound up instead with an unexpected bonus season from the veteran tailback.

That worked out for everybody in some capacity. And it will now still give Ohio State a full season to build the rushing attack primarily around J.K. Dobbins, and it might work out in its favor that it only really had to do it once.

Weber was able to show what he could do when he was healthy, and that should give him a slight bump with his professional stock. He’s still probably going to wind up in the middle rounds of the NFL draft, but nobody can blame him from saving the wear and tear on his body at the college level after spending four full season with the program.

Ohio State was able to push the tempo offensively by alternating Weber and Dobbins to keep them fresh. And while at times that left a mixed bag of results, the threat each of them provided contributed to the overall success of the Big Ten’s most explosive offense as defenses continued to dare the Buckeyes to throw the football — which allowed Dwayne Haskins to blossom into a Heisman Trophy finalist. 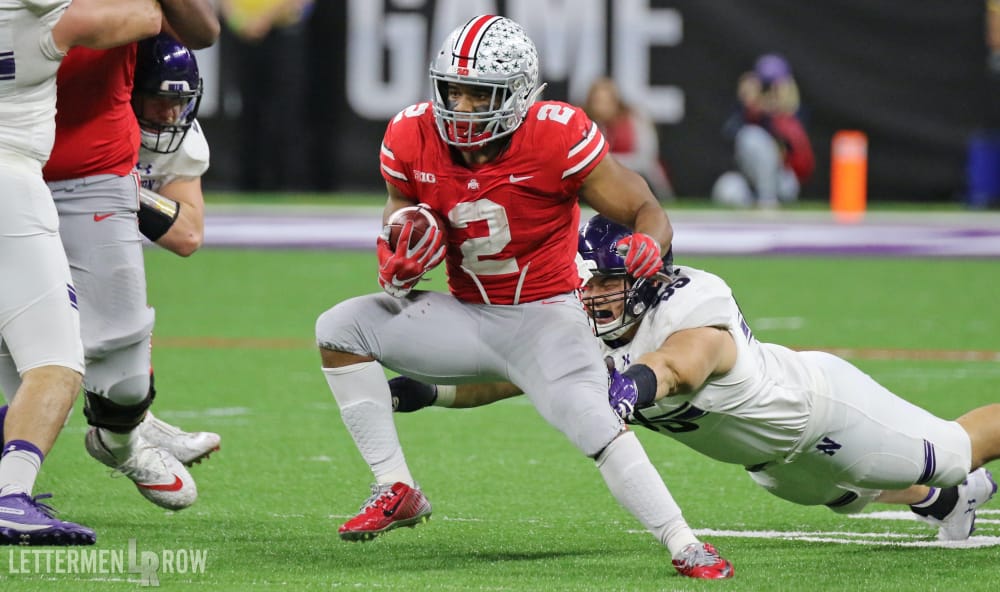 Ohio State running back J.K. Dobbins will be the unquestioned leader in the backfield for the Buckeyes. (Birm/Lettermen Row)

And Dobbins saved a bit of mileage on his legs, which could pay off in a major way next season when he will likely get a much heavier workload. With Ryan Day and the rest of the offensive coaching staff having proven during their careers they will build the offense around the personnel on hand, Dobbins is going to enter his junior year as the top weapon at Ohio State’s disposal. It’s going to be fascinating to see how the Buckeyes evolve the attack to let Dobbins shine, and he should probably spend the offseason conditioning program getting ready to touch the football at least 2o times every week.

He doesn’t necessarily have to do it all alone without Weber, of course. Master Teague is waiting in the wings to lend a hand heading into his second season with the program, and there were encouraging glimpses of his potential as a freshman. Ohio State is also about to sign Marcus Crowley on Wednesday, it has a commitment from Steele Chambers — and could potentially get some carries out of Tate Martell if he wins a quarterback competition against Matthew Baldwin.

The contributions of Mike Weber for the Buckeyes won’t be forgotten, particularly given his success in every game against teams from his home state of Michigan and the perfect record he helped post in The Game. But Ohio State shouldn’t miss a beat on the ground without him, and everybody can part ways feeling good about the decision — one year later than expected.