But after a couple feisty minutes early, the Buckeyes did get the blowout they surely anticipated all along against Rutgers.

The defense was dominant. Ohio State couldn’t be slowed on offense even when it was committing a few costly penalties on the offensive line. And there was even a burst of electricity on special teams when Ryan Day dialed up a fake punt just to make sure the drama wasn’t extended too long on Saturday night at the Horseshoe.

The final score doesn’t really matter for the Buckeyes when the Scarlet Knights are on the schedule, and Lettermen Row isn’t going to bother waiting to post Snap Judgments. There will be more analysis coming as the backups and freshmen likely get a heavy dose of action, but for now, there’s no sense waiting for more action before calling the race for the Buckeyes.

Bottom line: Ohio State remains far too talented for Rutgers and didn’t need to break much of a sweat for the third win of the season. 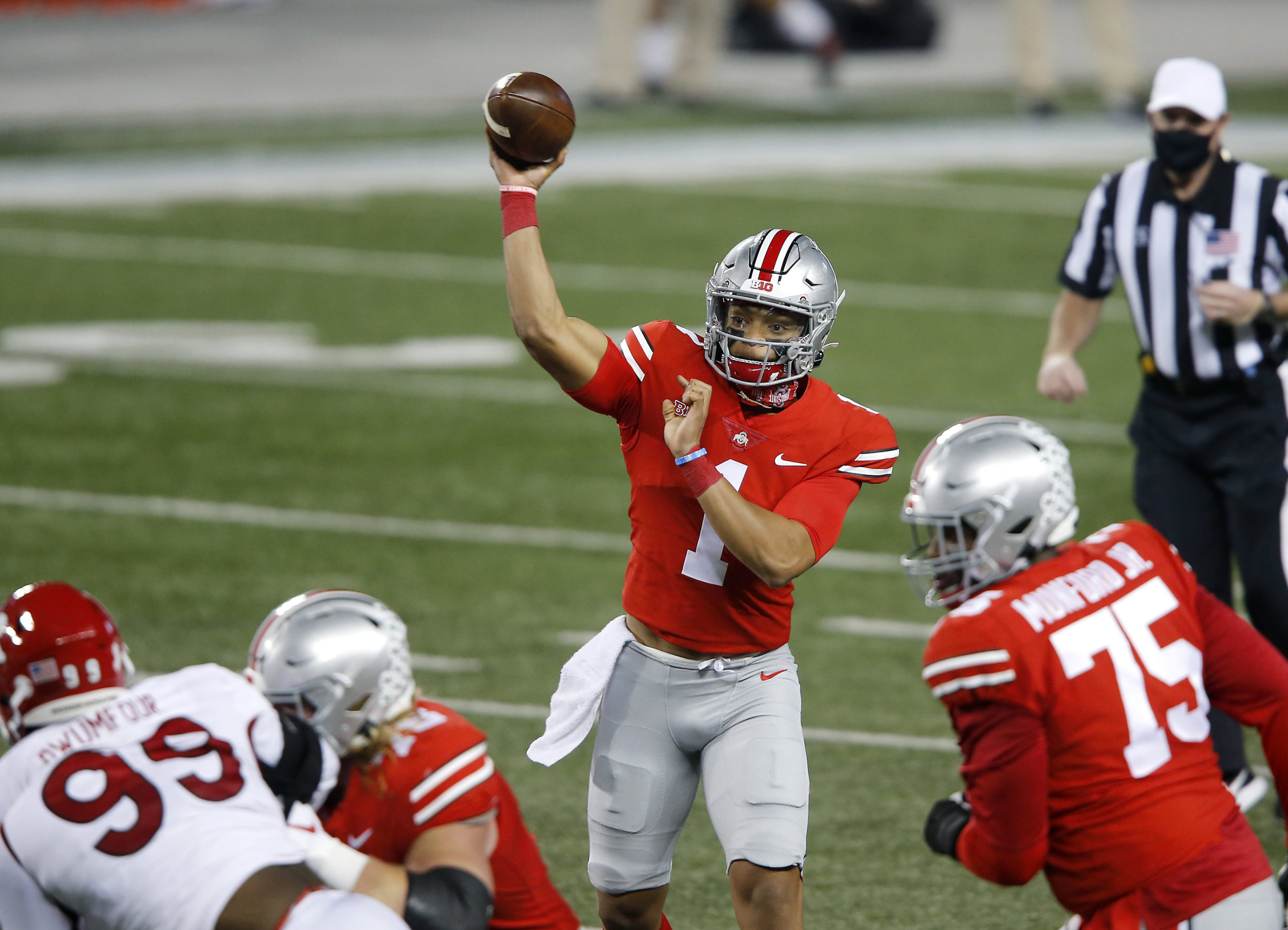 No Heisman Trophy will ever be secured against Rutgers, even though it does represent a great stat-padding opportunity. But Justin Fields was certainly showing exactly why he’s considered such a special quarterback during his methodical, surgical first half that showed everything he can do with this gifted right arm.

Deep shots on the money. Throws into tight windows. Anticipation tosses into the back of the end zone. Gorgeous touch when bullets wouldn’t work. Fields did a little bit of everything NFL scouts could want to see against Rutgers, and he topped it off with a touchdown run that his athleticism made look far easier than it really was as he dashed around the corner and skipped over the goal line. Fields is as good as Ohio State has ever had the position, and he’s putting on an absolute show for the program.

After dealing with injuries throughout his career all the way up to the opener this year then getting robbed of a season debut last week thanks to a false-positive COVID test, there might not have been anybody on the roster more deserving of a highlight-reel moment than Justin Hilliard.

The sixth-year senior linebacker showed up all over the field and was clearly bringing energy for the Silver Bullets even before he covered a throw into the flat, attacked the football and then recovered the fumble he forced in the second quarter. Hilliard has never truly been able to unleash the kind of potential that was projected during his recruitment so many years ago thanks to the string of injuries. But there is certainly a key role for him on defense, and the Buckeyes know he’ll give them everything he’s got. 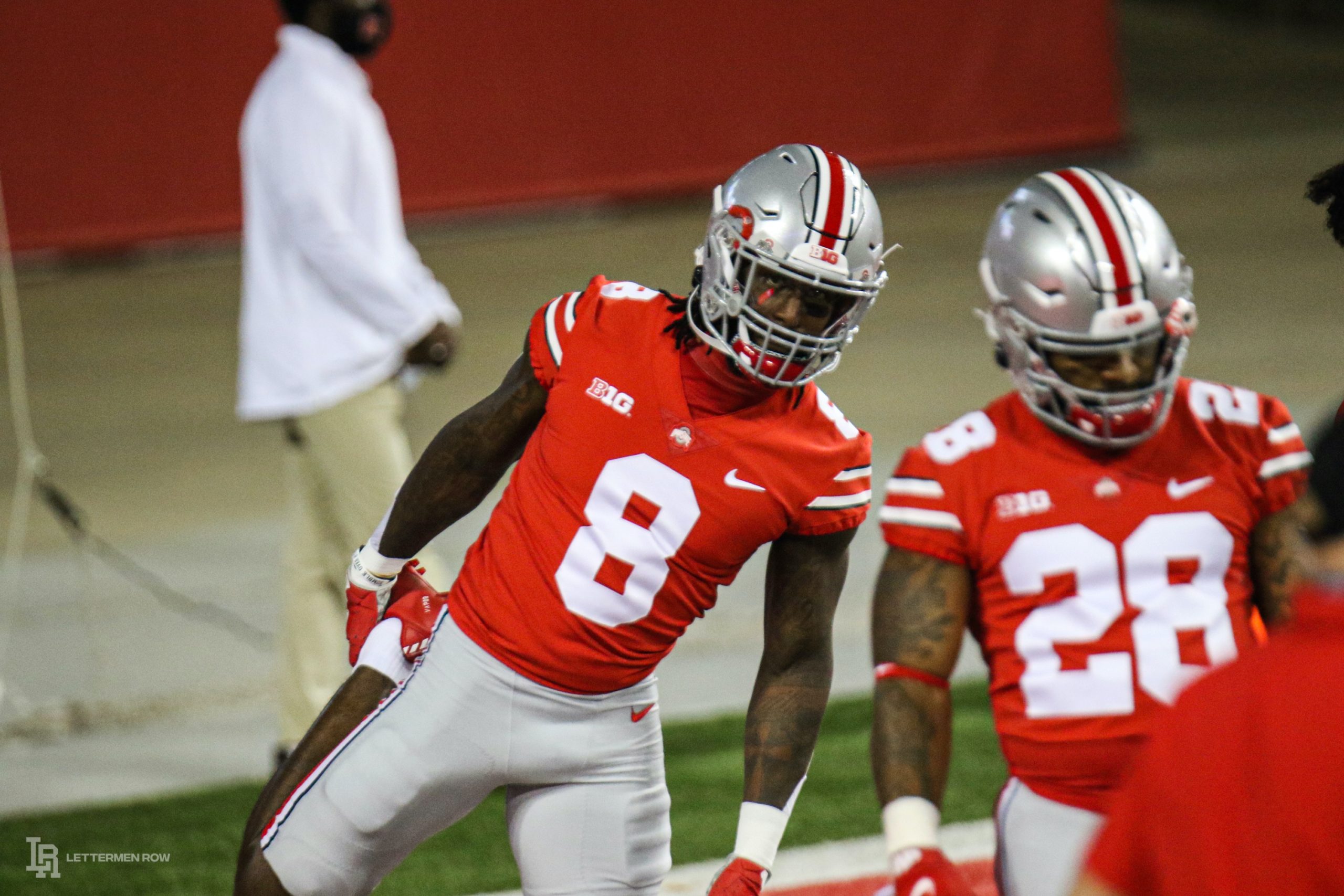 Ohio State and running back Trey Sermon are still pushing for more on the ground. (Birm/Lettermen Row)

Ohio State may need to shake up running back committee

No sweeping judgments about Ohio State are likely to be made against a hapless opponent like Rutgers, so there’s only so much stock that will go into the evaluation no matter how a player performed. But with all eyes still focused on the running backs as a unit of some measure of uncertainty, it was telling that Demario McCall was inserted for a jolt late in the second quarter and that Steele Chambers again looked like a viable weapon when he was darting down the field on his fake-punt rush.

McCall is still unlikely to be counted on as anything more than a specialized, gadget-play contributor thanks to his ball-security issues and the inconsistency that has plagued his career. But Chambers might be worth a closer look for the Buckeyes given the intensity he carries the football with and his apparent desire to seek out contact at the end of a run. Chambers also flashed that upside against Nebraska in the opener, and he could be in line for an extended audition.

Ohio State will want Blake Haubeil and his big leg back as soon as possible. And it’s still hard to know exactly how long the kicker’s groin injury will limit him moving forward, because those issues are notoriously tricky to predict.

But if Haubeil can’t go, it looks like Jake Seibert might be an option to provide a bit of place-kicking help in the short term — before he eventually becomes the full-time answer down the road. Seibert wasn’t called on for more than extra points in the first half, but he showed off with some impressive long-range attempts during pregame warmups and at least handled his opportunities in meaningful action without incident. The Buckeyes have no uncertainty when Haubeil is healthy, but they could have a security blanket if it comes to that.