What We Learned as Buckeyes cruised to weird win over Rutgers
Aritcle written by:

COLUMBUS — Ohio State didn’t bother pretending that was the kind of win it was expecting.

Justin Fields admitted he wasn’t anticipating playing well into the fourth quarter. The Buckeyes certainly didn’t plan for every trick play imaginable to be thrown at them long after the eventual outcome had already been determined. And the program certainly recognized that it could have kept its foot on the pedal longer instead of cruising to the finish line.

Of course, the Buckeyes also unleashed a dominant half of football, were never seriously challenged by Rutgers and won yet another Big Ten game in blowout fashion with the 49-27 decision on Saturday night at the Horseshoe. Maybe it’s fair to evaluate the victory as a mixed bag, though it’s probably equally safe to just ignore the second half entirely given the circumstances.

“If you had asked me at halftime, I would have felt really good,” Ohio State coach Ryan Day joked. “Then after the game, it feels just kind of flat. Just kind of flat, and I want to get on the film and figure out exactly where it all was — and I think really we’ve just got to focus on practicing better. If we practice better, we’ll finish better.

“But, hey, listen: Any win this year, any conference win, is a good win. There are a lot of good things out there, so it’s not like we’re going to sit here and talk about all the bad things. That was a good conference win, we’re 3-0, we’re playing good football, lot of good players on the team, we came out really well in the first half. But we’re critical, that’s a good thing. We want perfection and we’re working for greatness.”

The Buckeyes weren’t perfect, of course. But they still showed how high their ceiling is as a national-title contender with an overpowering first half that removed any real drama down the stretch. Lettermen Row is diving into what matters and what didn’t coming out of Win No. 3 for the Buckeyes. 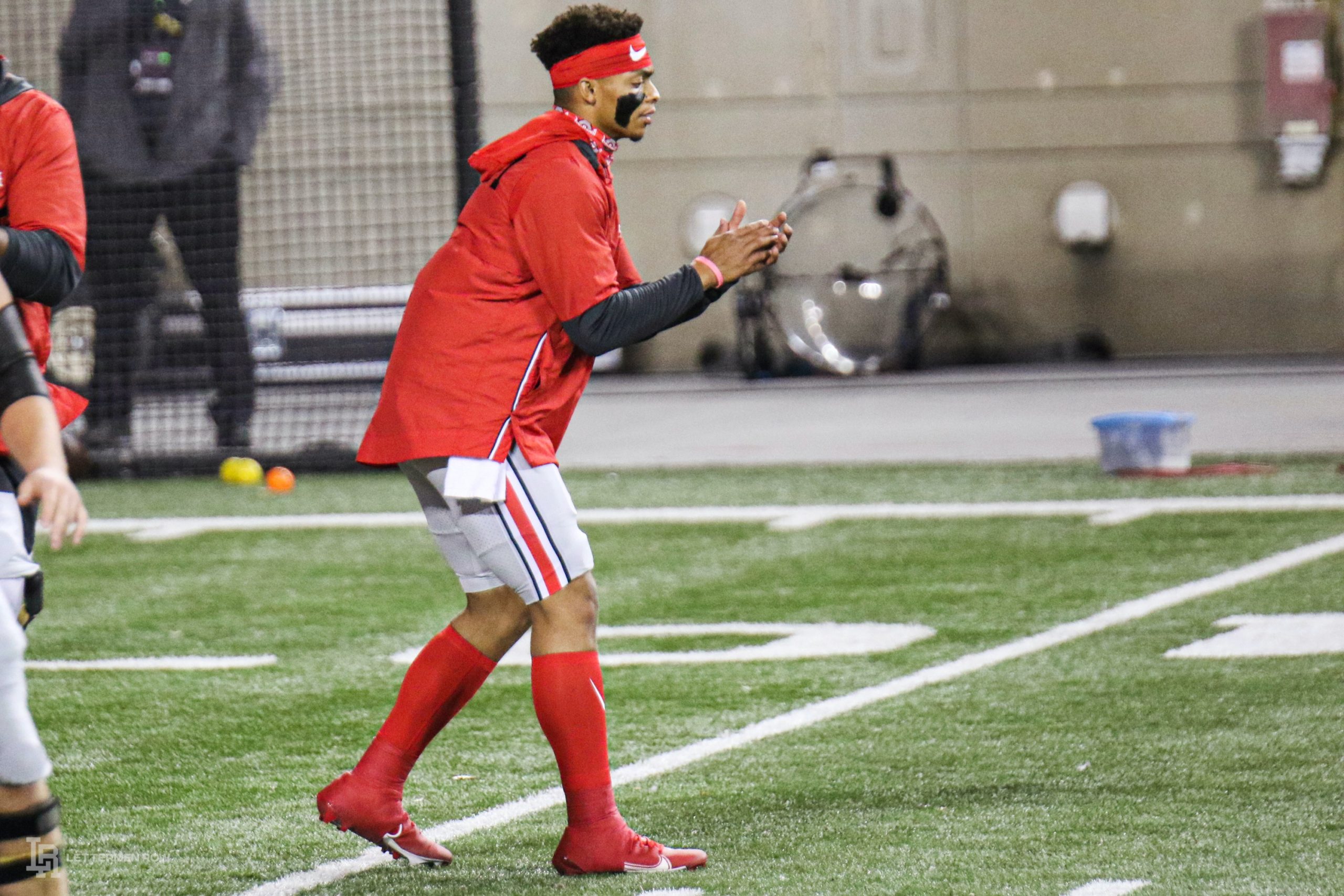 Ohio State may not need more from rushing attack

The Buckeyes take great pride in their ability to run the football, their rich tradition at tailback and their faith in a talented offensive line. And for the most part, Ohio State had plenty it could feel good about with both Trey Sermon and Master Teague averaging more than five yards per carry to pace an offense that again racked up over 200 yards and a couple scores on the ground.

There still didn’t seem to be quite the same explosiveness coming from the backfield that J.K. Dobbins provided a year ago, but the truth is that may not really matter for the Buckeyes this season. For starters, Ohio State can unleash maybe the most dangerous passing attack in school history with Justin Fields throwing to a deep, athletic collection of targets. And beyond that, the Buckeyes don’t even really seem to be worried about tapping into their full potential as a rushing threat, because Fields would be a huge part of that himself and could make life much easier for Teague or Sermon if he ran the football more often. Ohio State instead can save that up for bigger games, and that’s probably one reason it’s not stressed about what it’s seen so far against overmatched opponents. That doesn’t mean Day wouldn’t like to see more from the running backs or the offensive line, because there is room to grow. But it is a reminder that it might not be a make-or-break situation for the Buckeyes.

There might be only so much stock that can really be put into a game that was realistically over at halftime, and it did get complicated for the Buckeyes when Rutgers was throwing everything it had in the playbook at them at the same time they appeared to be turning their attention to next week. Those excuses won’t really fly for defensive coordinator Kerry Coombs, though, and it’s hard to imagine he’ll be thrilled with what he sees on tape from the secondary.

Ohio State didn’t have any trouble early on, which should be encouraging since it was the first outing without Cameron Brown in the mix and there was a bit of juggling going on with the personnel. But his absence did become more glaring as the game wore on and Tyreke Johnson was struggling to make the most of his huge opportunity to show he could be counted on at cornerback. If anything really sticks in the minds of the coaching staff defensively coming out of the Rutgers performance, it’s likely to be the plays that got away from Johnson — particularly with Ryan Watts showing signs the freshman might already be capable of helping. The next two opponents might have the best passing attacks the Buckeyes will face in the Big Ten this season, and that’s an area that will be closely evaluated. 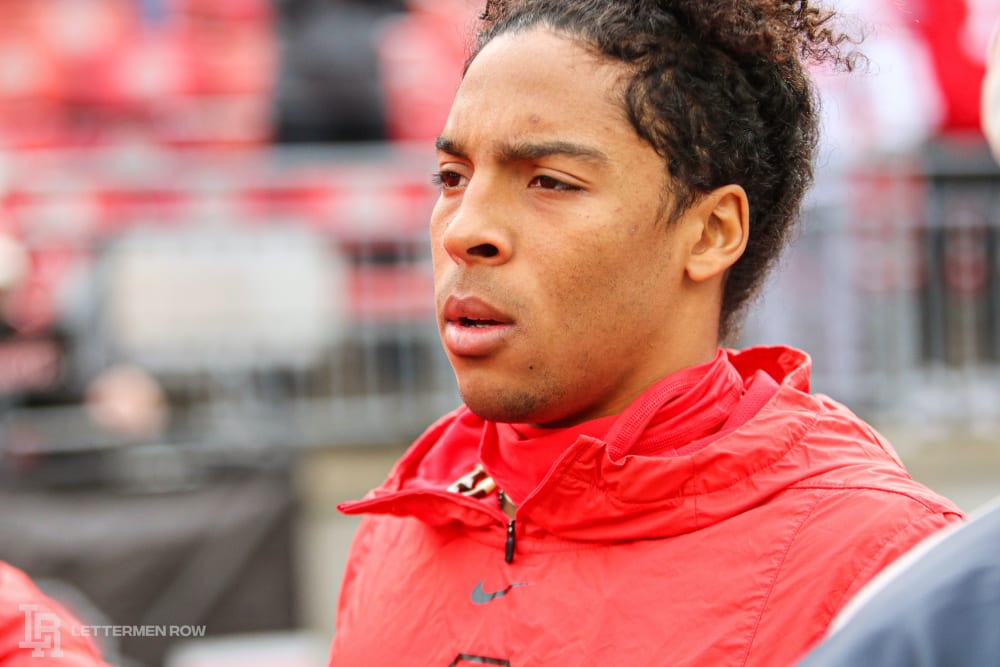 Just when it looked like there was about to be more buzz for getting Steele Chambers involved with the offense, the football popped out of his hands — twice. For a guy sitting third on the depth chart and trying to make a move into the rotation, those are mistakes that simply can’t be made and won’t be ignored by the coaching staff.

Chambers ran hard and wasn’t afraid of contact on his momentum-swinging carry on the fake punt early in the game. But that rush ended with the football on the ground, and given a chance to potentially cap off a drive for the Buckeyes in the fourth quarter, he fumbled again in the red zone. As Demario McCall can attest for his younger teammate, the chances dry up in a hurry when there are ball-security questions. Perhaps the Buckeyes will chalk that up to growing pains, but that might also be the reason Chambers wasn’t involved in a more competitive matchup last week against Penn State.

The strange second-half vibe can’t be blamed for some of the sloppy penalties for the Buckeyes, because many of them came before intermission. In particular, Ohio State will be trying to figure out what was happening on the inside of the offensive line with Harry Miller getting flagged for three holding penalties one week after earning the first champion grade of his career at guard.

The Buckeyes have the firepower to erase mistakes pretty quickly, and second-and-20 rarely even seems like that big of a deal to Fields. And against essentially everybody in the Big Ten, it’s probably not an issue. But if Ohio State is going to win two games in the College Football Playoff against comparably-talented programs, it can’t continue to put Fields behind the chains or give away free yardage on defense.

While just about everything else on Saturday night is somewhat open to interpretation, there is no mistaking that Justin Fields and Chris Olave are capable of making magic together in the passing attack. Truly it’s a sight to behold those two working together with what seems to be a telepathic bond, and they added two more touchdowns together in the win over Rutgers.

Olave often just downplays the vibe the two have and chalks it up to hours of hard work together, and that’s obviously a primary driver of the success. But it’s hard not to at least consider there’s something else going on when Fields is rolling to his right and seemingly poised to make a dangerous throw only for Olave to materialize in the exact spot as the football to make a big-time catch in the back of the end zone. Garrett Wilson is obviously no slouch in that department either, but the Fields-to-Olave connection is nothing short of remarkable.